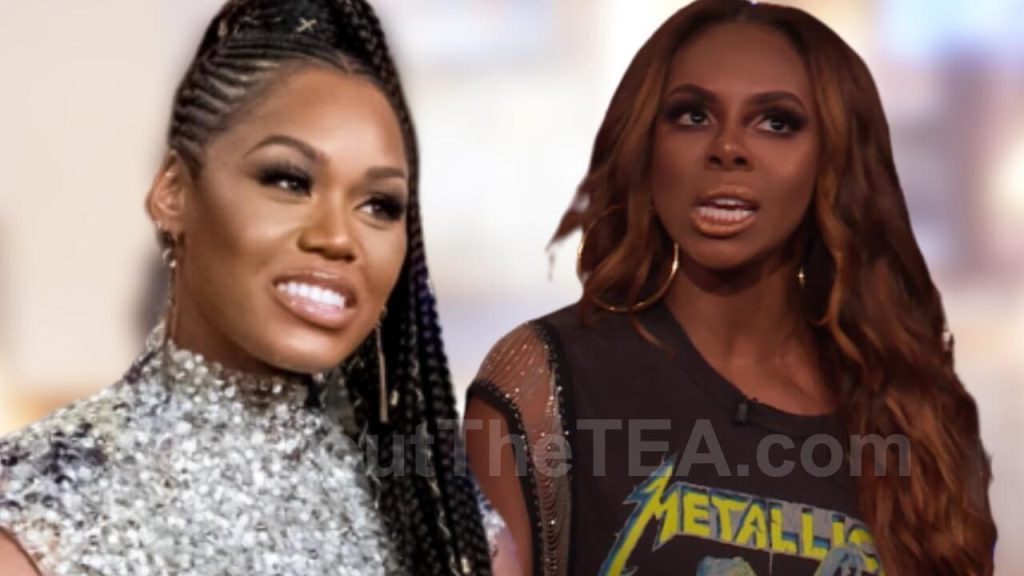 Candiace Dillard’s reign of terror continues behind the scenes.

Just two weeks away from The Real Housewives of Potomac Season 5 premiere — Candiace Dillard had a complete meltdown over the release of Monique Samuels’ new rap song, “Drag Queens,” AllAboutTheTEA.com can exclusively reveal.

Monique Samuels released the catchy track on Thursday, July 16, and while it was well received by fans — Candiace Dillard “completely loss it behind the scenes and demanded Bravo shut it down,” a source told AllAboutTheTEA.com.

According to an insider, Candiace Dillard is accusing Monique Samuels of dissing her in the song and complained to Bravo bosses.

“Immediately after the song was released, Candiace reached out to Bravo and E! (who published the song first) complaining about the song being an attack on her.” A source revealed to AllAboutTheTEA.com.

The source continued, “She lied and said Monique mentioned her name in the song. She’s hella pressed. The song is not about Candiace.”

When Monique Samuels spoke to E! — she explained that creating music is therapeutic and her way of coping with stress.

“It was a lot that happened last season and this is pretty much me just reclaiming my power back and reminding myself of who I am, and although, you know, I’m not perfect never claimed to be,” she tells E! News in an exclusive chat. “I just needed a way to reassure myself that, you know, everything will be fine. And then this song was kind of my way of just letting everything go, getting everything that I felt off of my chest.”

Monique Samuels also noted that her song is “just fun, uplifting [and] a little shady” — and all the drama from last November is behind her.

In an effort to appease Candiace Dillard’s bellyaching — Bravo and E! backed off from fully supporting Monique’s song.

“E! only published a snippet of Monique’s song (they cut it down to 52 seconds) when they were suppose to play the entire song and lyric video.” A source shared with AllAboutTheTEA.com. “And Bravo hasn’t promoted the song on their social media either.”

Monique Samuels and Candiace Dillard’s Season 5 brawl will go down in Housewives history as one of the most epic’s fights on reality TV.

As reported, the drama between the ladies exploded on October 16 while filming a cast event where an argument turned physical.

The Real Housewives of Potomac returns Sunday, August 2 at 9:00 p.m. ET, on Bravo!