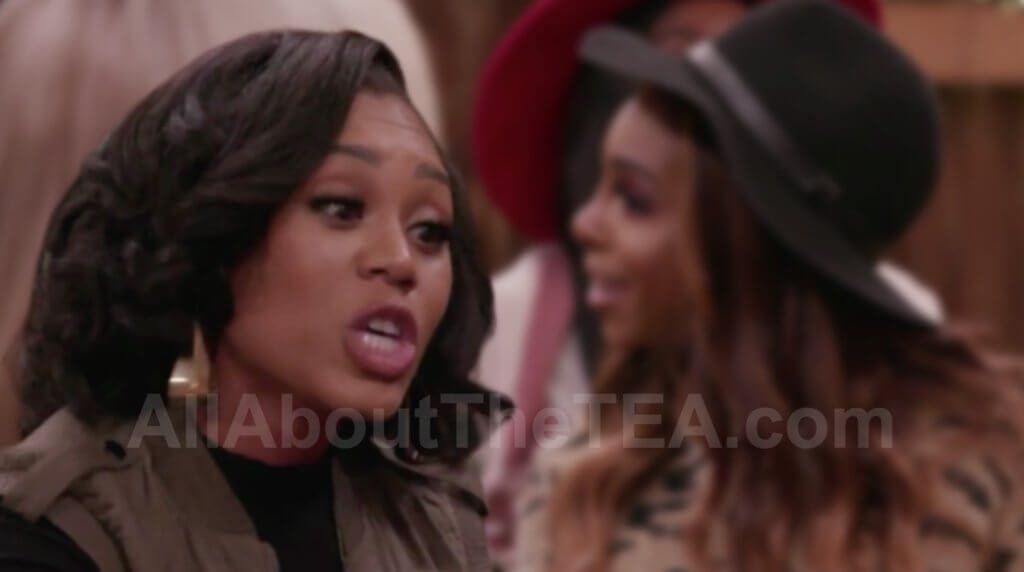 Monique Samuels and Candiace Dillard’s Season 5 brawl will go down in Housewives history as one of the most epic’s fights on reality TV — and AllAboutTheTEA.com has NEW tea to spill!

While Real Housewives of Potomac fans eagerly await the show’s return in August to see how the fight plays out — AllAboutTheTEA.com has blow-by-blow exclusive details of the action.

Candiace Dillard’s husband, Chris Bassett, spilled the tea in a series of DM messages obtained by AllAboutTheTEA.com and he breaks down the fight from the start to finish. 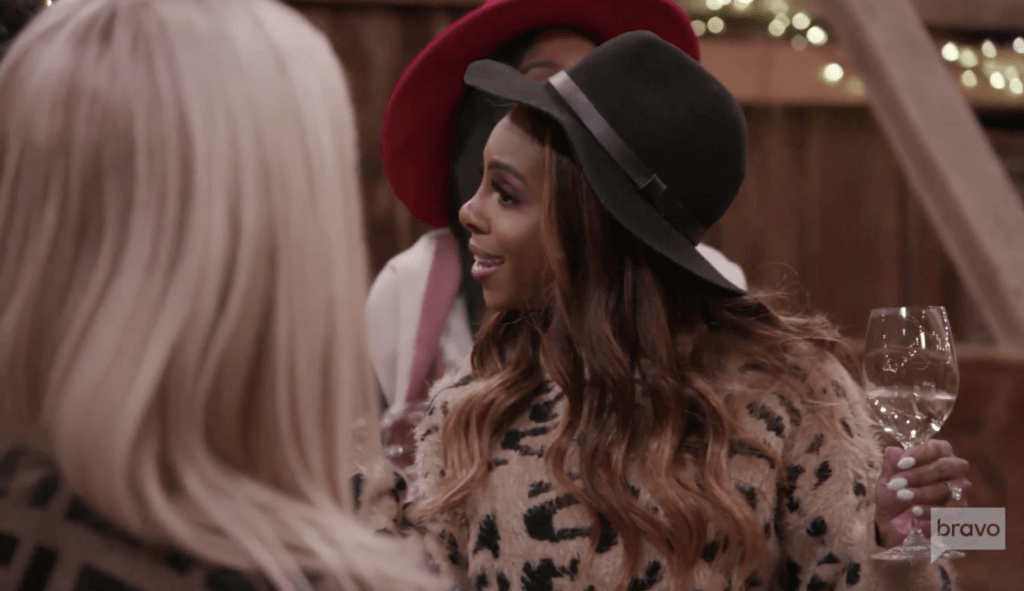 According to Chris Bassett, his wife initiated the drama with Monique Samuels by, “being extra as always…. and suggested that Monique was fake sleeping,” the prior night while filming another scene. That exchange led to a verbal spar between the  ladies — with Candiace accusing Monique of mom-shaming her then she proceeded to once again ask Monique to drag her. Read the DM below. 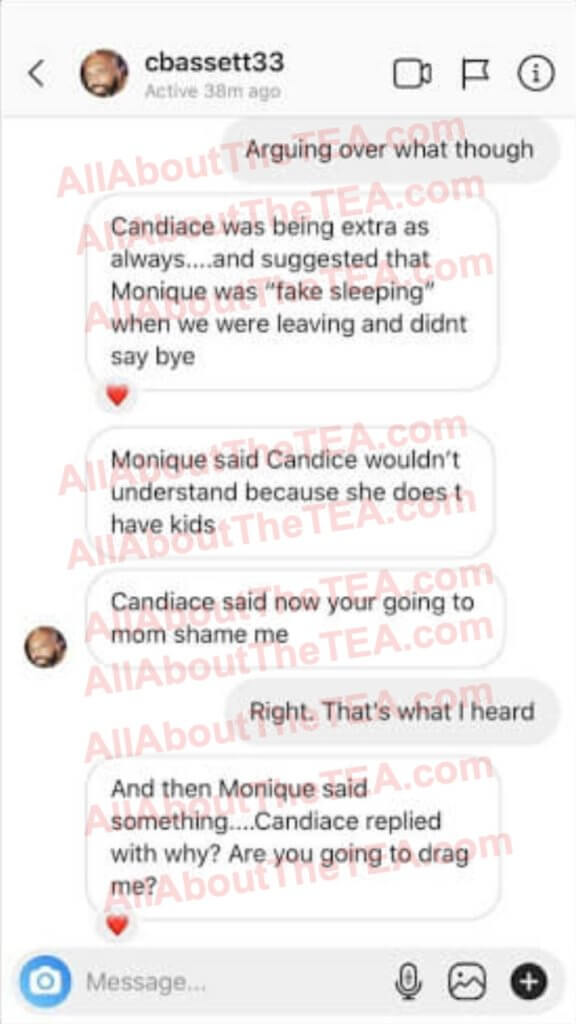 Monique Samuels, 36, and Candiace Dillard, 33, have been at war since their physical altercation on October 16, 2019 while filming a cast event at a winery in Bethesda, Maryland. The incident led to second-degree assault charges being filed by both parties that was later dropped by the District Court of Montgomery County.

The incident shook the cast to its core and production was forced to end the taping early that night, AllAboutTheTEA.com learned exclusively, as the situation spiraled out of control.

Chris Basset claims Candiace told the group of ladies, “you know what, I really love all of you…like we have our differences but I really LOVE you all……” This prompted Ashley Darby to chime in about Candiace’s relationship status with Monique. Read below. 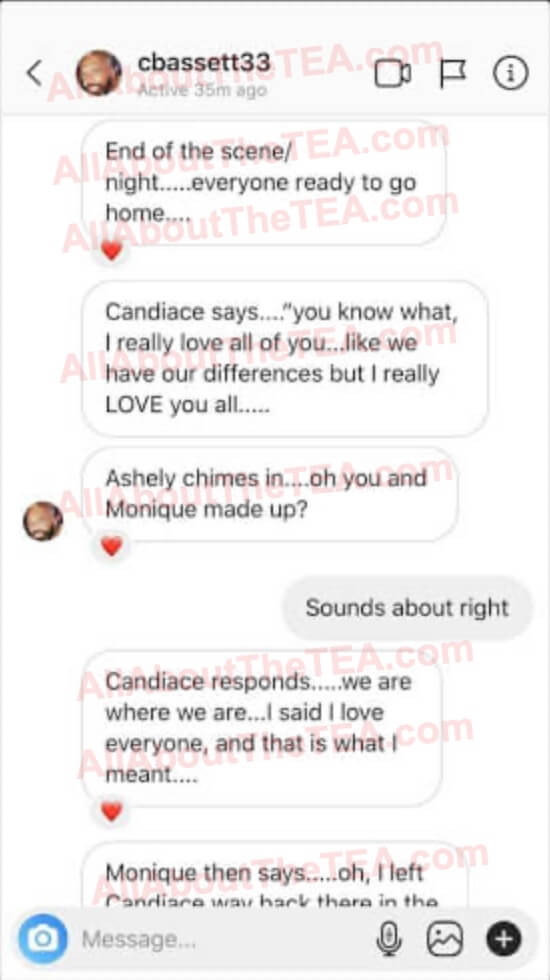 Monique’s clap back triggered the verbal argument and from there it was on. 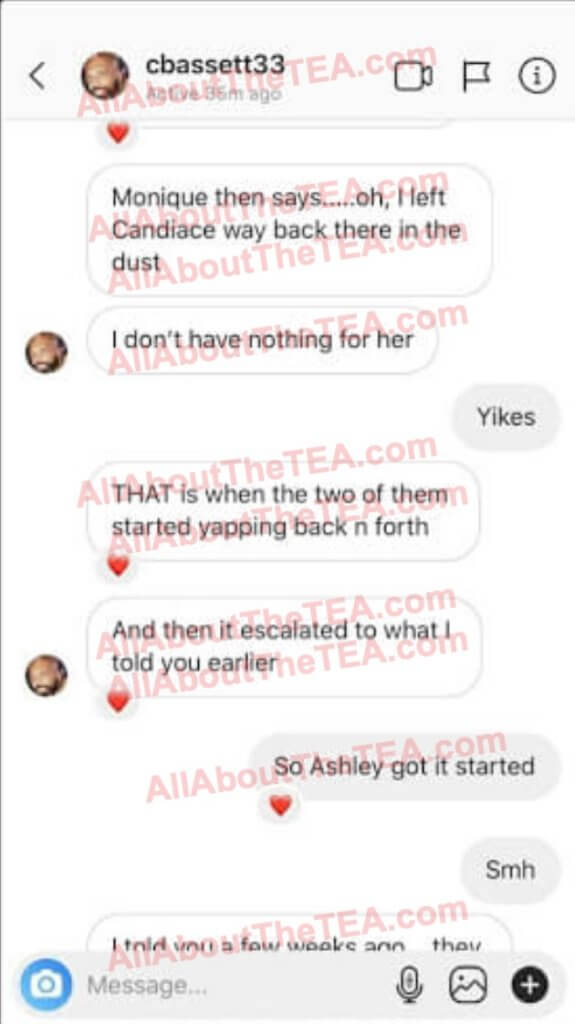 As their argument escalated, things turned physical. Monique flicked Candiace’s hair, Candiace then pushed Monique’s chest, then allegedly threw a glass of wine at Monique — to which Monique responded by slamming Candiace on the table and punching her “three times” in the head. Chris describes how the fight unfolded below. 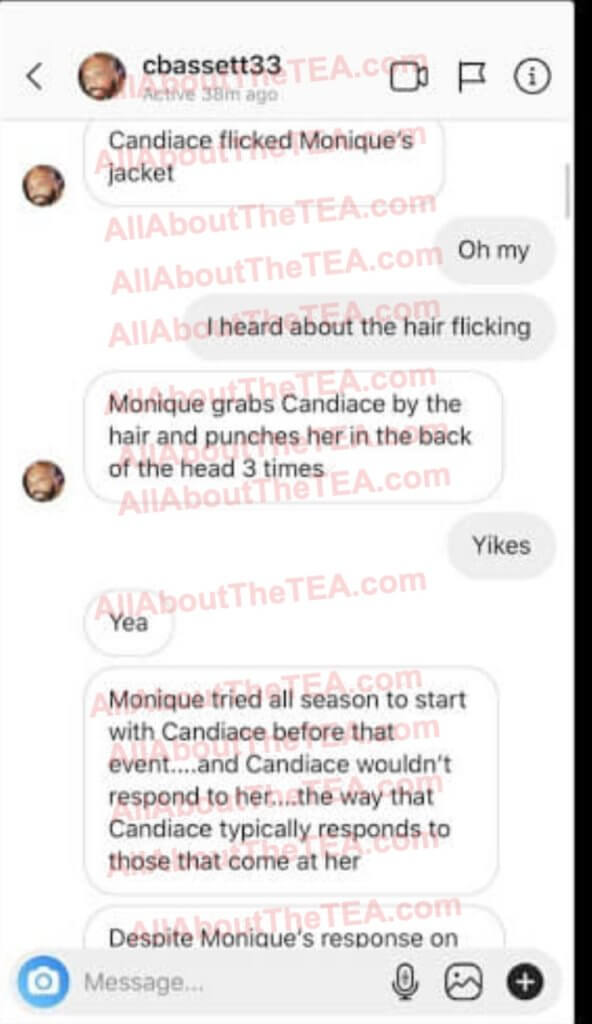 Chris claims Monique reached for a knife while gripping Candiace with her other hand — and he claims three men tried to peel Monique off of Candiace. 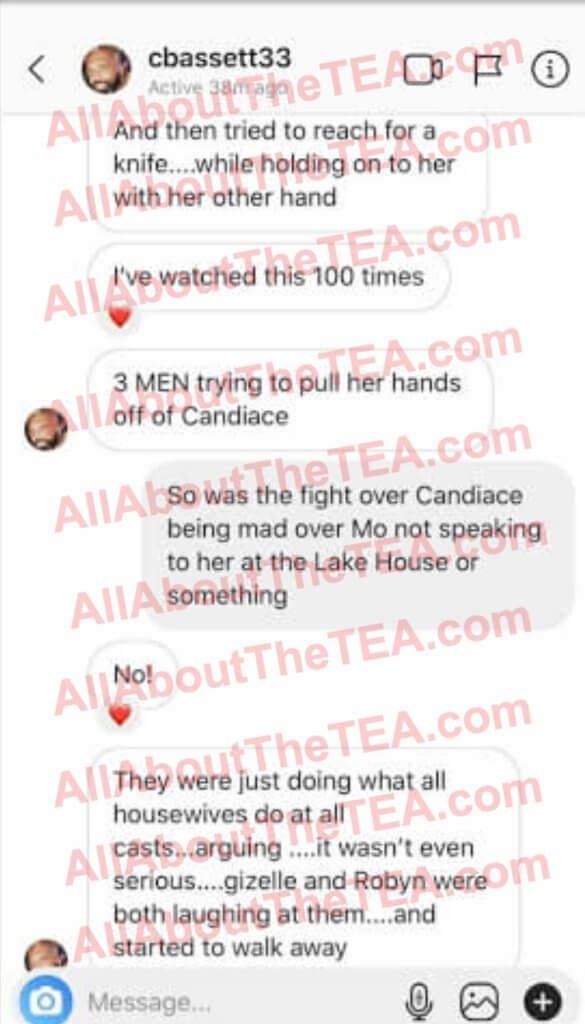 After the ladies were separated in different parts of the venue, an eyewitness to the fight tells AllAboutTheTEA.com exclusively, “Candiace was yelling outside the door calling Monique a hood rat b*tch, ghetto b*tch and then kept saying…’she’s fired right! Fired! Fired!'”

According to the eyewitness, this prompted Monique Samuels to run after Candiace Dillard and try to “finish what she started, since Candiace was yelling for Monique to be fired.”

In the following DM message, Chris Bassett confirms the eyewitness account but doesn’t include what prompted Monique’s reaction. Read below. 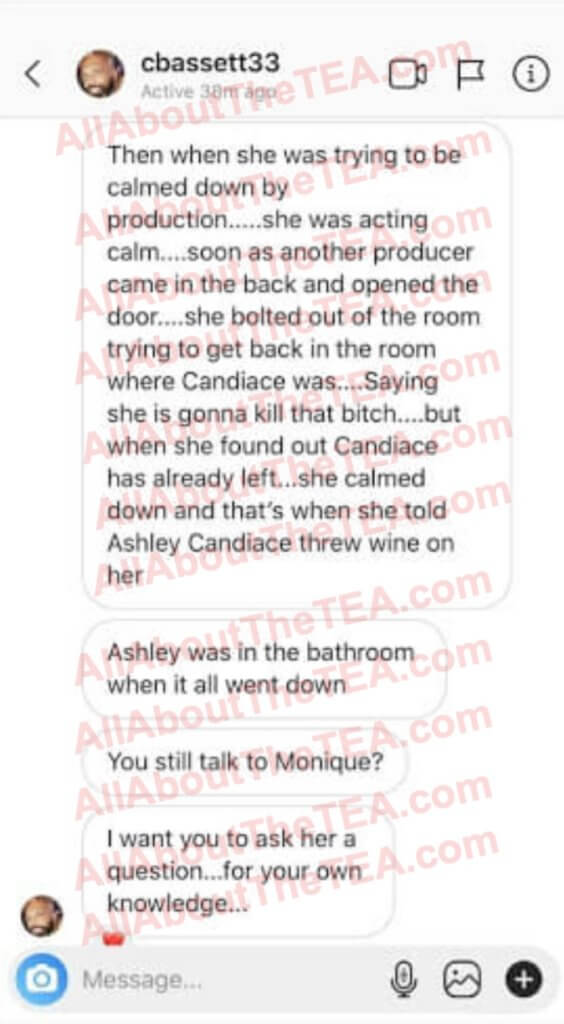 Chris claims Real Housewives of Potomac fans will see a different side of Candiace Dillard in Season 5. 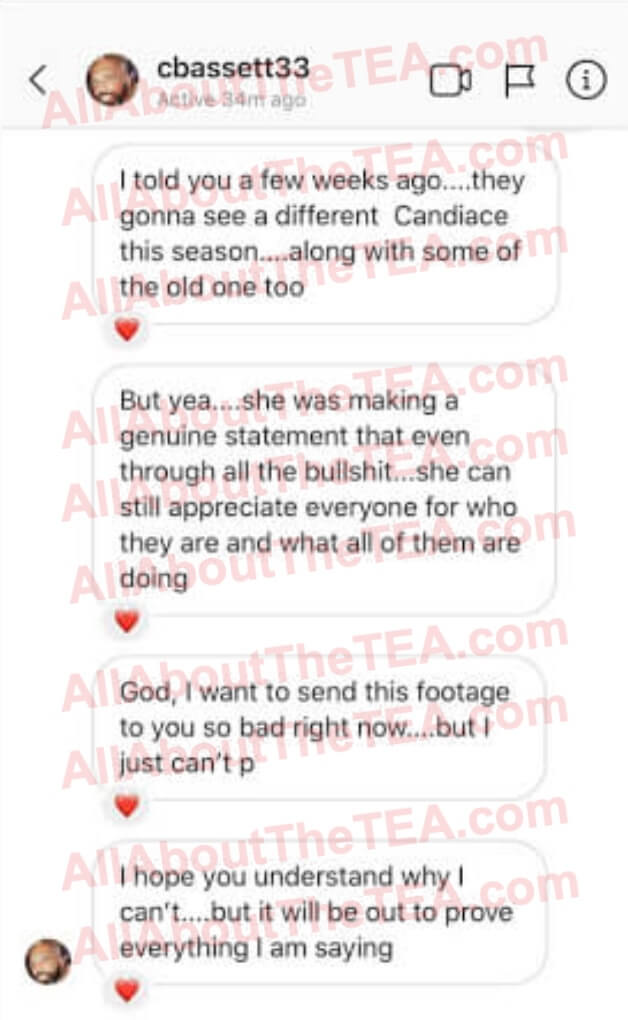 “Production had several meetings to review the situation. The fact that Candiace ran to the police and refused to mediate the problem with Monique was a huge turn off to the team.” A source told AllAboutTheTEA.com. “As a collective, they decided Monique would not be banned since Candiace started the fight.”

Additionally, Candiace swayed Gizelle Bryant and Robyn Dixon to not film with Monique in an alleged plot to oust the mom of three from the Bravo reality series. Candiace also tried to influence Karen Huger to do the same.

An insider revealed exclusively to AllAboutTheTEA.com that Candiace Dillard tried to force Karen Huger to pick a side in the rivalry.

“Karen [Huger] was instructed point blank by Candiace not to film with Monique. She told Karen, ‘It’s her or me…pick a side!'”

However, unlike Gizelle Bryant and Robyn Dixon — Karen Huger did not fall in line with Candiace’s demands and as a result — Candiace suffered a major temper tantrum.

“Karen refused to pick a side in this mess. She thinks that’s childish but Candiace took that to mean that she’s team Monique and lashed out at Karen.” said the source.

According to a rock solid source,” Candiace uses her friends as possessions.”

“Karen has tried everything to force the peace but Candiace blew up and accused Karen of being a bad friend and playing the middle for remaining friends with Monique.” The source added. “Karen feels it’s a lost cause.”

As exclusively previously reported, Monique strongly wanted to “quit the show,” after the fight because some of her Real Housewives of Potomac costars used the altercation to gang up on her.

“We never thought as black women we would be right here, but we are,” Gizelle Bryant says in the Season 5 trailer below. “We have been able to hold ourselves above the stereotype, and in five minutes, she took it away.”

Gizelle Bryant then tells Monique, with whom she already has a tenuous relationship, “I by no means want to be near you.”

Monique Samuels says at the end of the trailer, “Then maybe I don’t need to be a part of this anymore.”