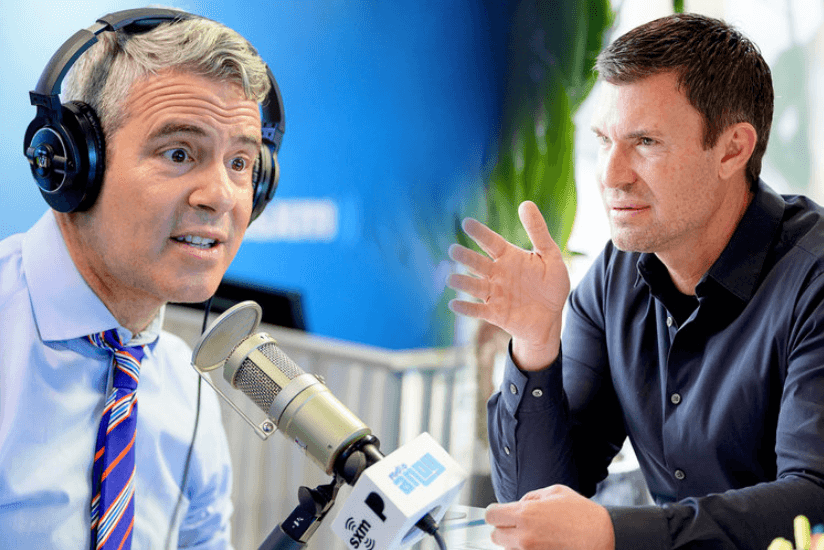 Jeff Lewis and Andy Cohen got into to some on-air drama on a recent radio show.

Things got heated between the former Flipping Out star and the Watch What Happens Live host on a recent episode of the latter’s SiriusXM show, when Jeff called Andy Cohen out for joking that he would like to date Jeff’s ex partner, Gage Edward. “Once in a while you will say, you know…You used to joke a lot about wanting to date Gage,” Jeff responded. To which Andy replied, “I know, and I stopped the second that you broke up.”

Jeff Lewis and Gage Edwards broke up in February after 10 years together. They share a 2½-year-old daughter, Monroe. “You actually did not,” Jeff snapped back. “You kept going with it. And actually, you said it recently.”

Andy Cohen has made his crush on Gage known throughout the former couple’s 10-year relationship. Last month, during an episode of Andy Cohen Live, Andy reacted to the news that Jeff had gone Instagram official with his new boyfriend, Scott Anderson. Andy joked about bringing Jeff to an upcoming Radio Andy event in Los Angeles.

“You did mention something about bringing Gage, and it did hurt my feelings,” Lewis continued. “It was different when we were dating and you would joke, but now that we’re not together and it was a tough breakup — I just wanted to say that I prefer you not to say that.”

Andy Cohen apologized for hurting Jeff’s feelings assuring him that he had thought that he had stopped, and never actually acted on those statements. “I know that it is a joke, but after someone breaks up, it’s no longer a joke,” Jeff Lewis insisted.

Andy then turned the tables on the interior designer and called him out for not acknowledging the birth of his adoptive son.

“I thought it was odd that I never heard from you after the birth of my child,” Cohen told Lewis. The Watch What Happens Live host welcomed his son Benjamin Allen in February 2019.

“Are you kidding me?” Jeff hastily responded. “I even asked about sending a gift, and you said, ‘Absolutely don’t send me a gift, because I’ve received thousands of gifts.’”

“I definitely did not want a gift,” Cohen replied. “But you didn’t reach out. Look at our text history.”

“I am so sorry if I didn’t, but you were always in my thoughts and I did ask to send a gift… Okay, I’m going to be honest with you, I was a little shocked when I found out you had a baby. You were kind of the last person on earth that I thought, at this stage, would have a child.” Jeff went silent before responding.

Andy Cohen then asked Jeff if he was offended that he had not told him he was having a baby prior to the public announcement, “I have a big mouth, I can’t keep a secret, I understand why you wouldn’t tell me,” Lewis replied. “I was just surprised you were having a child because doing it on your own is so brave, and it’s not something I ever would have been able to do on my own… I never would have had Monroe if Gage wasn’t by my side.”

As reported, in October 2018, the two had a falling out after Jeff read private threatening text messages of Andy Cohen blasting him.