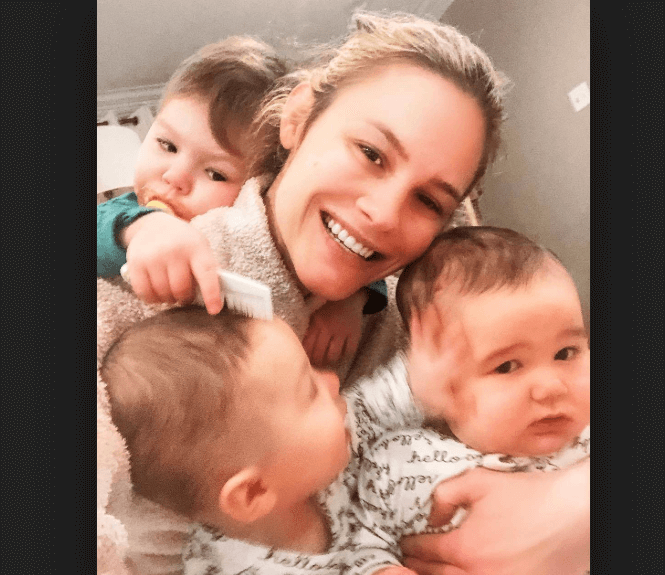 Meghan Edmonds has revealed that her son, Hart, has “irreversible brain damage” amid her husband’s cheating scandal.

In a new blog post, the Real Housewives of Orange County veteran shared that her son Hart, 13 months.

“From the minute he was born I knew something was different with Hart,” Meghan, who welcomed Hart and his twin brother Hayes in June 2018, wrote. “The nurses struggled to straighten his legs to measure his length. He suckled hard, shallow, and often until I bled and he spit up black.”

She took him to a pediatric ophthalmologist when Hart’s hands or his eyes stayed crossed for too long. They had visits with a chiropractor and cranial sacral therapy.

RELATED: Meghan Edmonds NOT Leaving Cheating Husband Despite Jim Sending M*sturbation Videos & D*ck Pics to His Mistress While She Was Giving Birth!

“I sat at a table with my husband for an hour as we waited for Hart to come out of the MRI. Tears gushed from my eyes as I blankly stared at the cars on the highway—but I wasn’t crying,” she recalled in her blog post. “My husband asked me what he could do. ‘Get me a Coke.’ Those tears were for a lot of things, but mostly the unknown and mostly Hart.”

“Hart has minor Periventricular Leukomalacia on both sides of his brain (namely the white matter), but more so on his right,” Meghan revealed. “She said that this explains all of my concerns: the rigidity in his muscles, the (somewhat) delayed physical milestones, the lack of fluidity with arm and leg movements, the stiffness in joints, the weakness in his lower back, the somewhat favored use of his right side. She told me this mainly occurs in premies and since he was not a premie (he was born at 37 weeks gestation) she believes this damage somehow occurred ‘a couple months before he was born.’ She explained that he is at risk for being diagnosed with Cerebral Palsy and will be monitored.”

Meghan claims Jim was surprised by the diagnosis.

“That night Jimmy and I went out to dinner for the first time in weeks,” she revealed. “I explained to Jimmy how we are not somehow compromised or punished for having a child with special needs (whatever that may or may not mean!), we are BLESSED. I will go on about this another time but just know that I do not see his diagnosis as anything but a gift: we were chosen to take on this special person. I truly feel as if we’ve doubled down and won the underdog hand. Truly.”

“I pray for a miracle and I grapple with how to navigate his life,” she wrote. “This is a heavy challenge as a mother: where do we go from here? This is where: one foot in front of the other.”

Meanwhile, a mere two weeks after AllAboutTheTEA.com exclusively broke the news of Jim Edmonds cheating on Meghan Edmonds while she was pregnant  — the couple have kissed and made up.

The woman Jim Edmonds admittedly had an “emotional affair” with was exclusively identified by AllAboutTheTEA.com as Jennifer Villegas, 34. The former mistress claims that she’s now being harassed by Meghan.

On June 17, Villegas filed a police report against Meghan — accusing her of harassment and threats against her family. In the police report obtained by AllAboutTheTEA.com — Villegas details receiving multiple texts and phones calls from the mom of three starting in September 2018.

As previously reported, Jennifer Villegas explained to AllAboutTheTEA.com that Meghan was aware of the affair sine last year (September 2018) — despite denying knowledge of the mistress in her lengthy blog post about the infidelity.