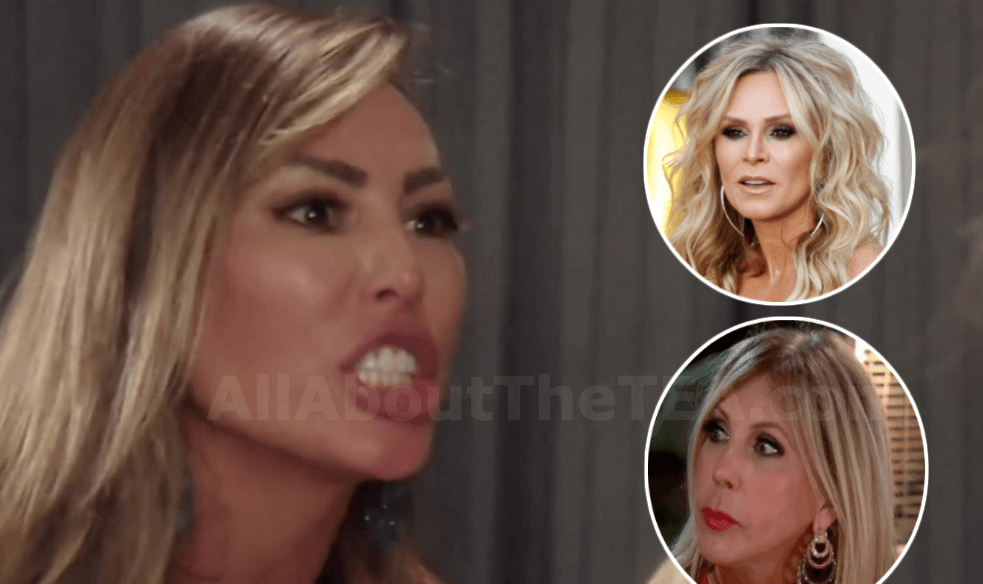 It’s filming season for the cast of The Real Housewives of Orange County, and AllAboutTheTea.com has exclusively learned that the ladies escaped to Miami and brought drama to the sunshine state with them.

The women have only been in Miami for 24-hours and already had two explosive fights under their belt. A production source is spilling tea about the messy cast getaway, and Kelly Dodd  is at the center of the drama.

“After the cast arrived on Wednesday, everyone settled in before venturing out. Kelly is beefing with Tamra [Judge] and Vicki Gunvalson. Shannon Beador is kind of staying neutral.” A source close to the action tells AllAboutTheTEA.com exclusively.

The first of two fights happened between Kelly Dodd  and Tamra Judge just hours after the ladies arrived in Florida.

“Shortly after settling in…Kelly and Tamra got into a screaming match at a restaurant bar over Tamra gossiping about Kelly pushing her mother down some stairs and Kelly’s bar fight with a woman.” A source dished to AllAboutTheTEA.com.

The source continues,”Kelly went ballistic on Tamra. Tamra tried to explain that she was defending Kelly and just repeating what someone else said. But there was no reasoning with Kelly…she was going off. Tamra seem to be taking up for the woman Kelly got into the fight with.”

The second blowout occurred Wednesday night, this time between Kelly and Vicki Gunvalson. The production snitch shared the following details with AllAboutTheTEA.com.

“Gina [Kirschenheiter ] and Emily [Simpson] told Kelly that Vicki was communicating with the girl from the bar fight. Kelly flew into a rage and confronted Vicki about it.” The source revealed to AllAboutTheTEA.com. “Kelly was yelling but Vicki did not back down.”

The source continues, “Vicki told Kelly that she’s out of control, called her a bully and told her that she’s a scary person. Vicki told her that she needs to stop hurting people. Kelly’s eyes got really big. She looked shocked that Vicki was defending the woman that Kelly got into the bar fight with. Kelly denied hurting the girl.”

Despite Kelly’s denials about hurting the woman in the bar fight, a source told AllAboutTheTEA.com that, “Vicki Gunvalson, Tamra Judge, Shannon Beador, as well as Real Housewives of Orange County producers are all aware of the woman and know specific details of the fight.”

The source also dished on a split cast dynamic currently brewing within the group.

“The group is completely split right now. Kelly, Emily, Gina and the new lady, Braunwyn [Windham-Burke] have formed a clique. While Vicki, Tamra and Shannon are sticking together.”

Share your thoughts on the Real Housewives of Orange County cast drama going down in Miami. Sound off below!