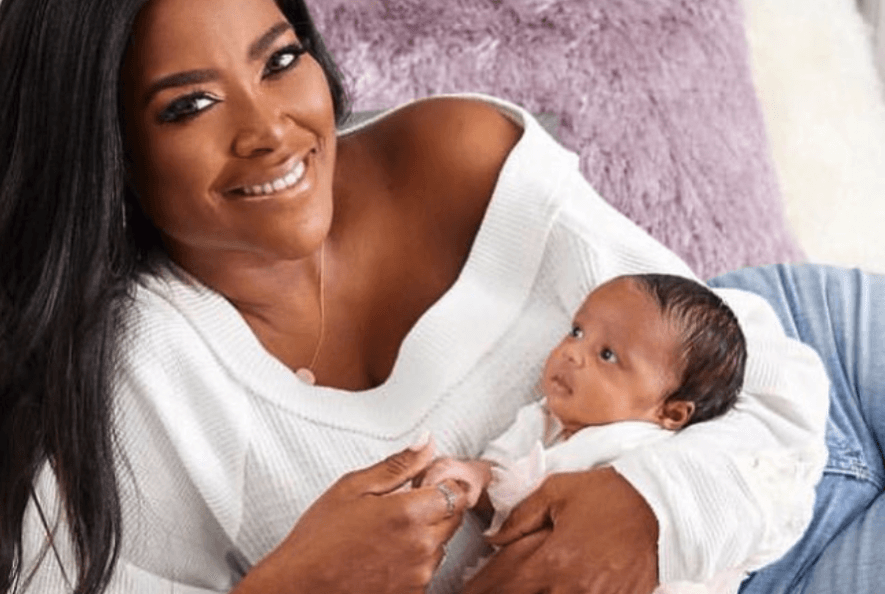 #3monthsold today (Yes I know I have items in my crib but it’s just for the video/photo) thank you @andy for my giant snoopy, And my aunty @kandi for my beautiful crib and @smiloinc for our amazing gifts #babybrooklyn #babydaly #brooklyndaly #miraclebaby

On October 27th, Kenya Moore posted that she was having pregnancy complications and depending on test results, she might have to deliver that day.

If you want to make God laugh have a plan… won't be long now. Pray for us ?? #babydaly #weloveyou #prayers

Then on November 4th, she posted the birth of her baby, Brooklyn Doris Daly.

#BrooklynDorisDaly is here! Thank you @people for sharing our journey She's so perfect and strong! Marc was incredible in the deliver room. I lost a lot of blood so I'm very weak but they both were strong for me. God is so good. We are blessed and doing well. My heart is so full at the abundance of love for our family! We love you all. #TheDalys #babydaly #BrooklynDaly #family #love

Now, let’s do the math — Kenya claims that her baby was born on November 4, so according to my calculator that would make February 4th, her baby’s 3-month birth mark — not today.

Additionally, according to Kenya Moore, her “miracle baby” was born “nearly six weeks premature” so her November 4th delivery date pointed to a mid December due date, not Thanksgiving as she announced.

Thank you for all the outpouring of love for this little Angel @thebrooklyndaly. We have received hundreds of gifts and emails and well wishes from people we know and some we have never met. As a first time mother I can’t describe what it feels like for people to shower your baby with love. The Dalys thank you all from the bottom of our hearts. #brooklyn #brooklyndaly #blessed #thankyouJehovah

Kenya Moore announced her pregnancy during the season 10 reunion — which was filmed on March 15, 2018. Even if Kenya conceived on that exact date — her due date would land on December 6. If People’s undisputed report is accurate — Kenya was not pregnant in mid March when she announced it.

Is Kenya confused or did she lie about her baby’s birth date, which ironically coincided with the Season 11 premiere of The Real Housewives of Atlanta.

Do you think Kenya Moore lied about her baby’s birth date? Sound off in the comments!