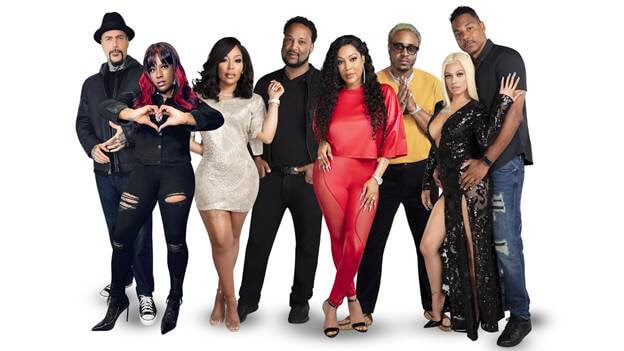 Marriage Boot Camp: Hip Hop Edition is set to premiere in March and will feature four new hip hop couples, the Jasmine Brand reports. Love & Hip Hop: Atlanta star, K. Michelle, and Kastan, Rich Dollaz and Mariahlynn, both from the New York franchise, Hollywood based cast members, Lyrica Anderson and A1, and Three 6 Mafia member, Gangsta Boo, and Emmet will all gather to work on their relationships in front of WEtv cameras. Dr. Ish Major and Judge Toler will return to counsel the four couples and force them to confront lies, betrayals, and longtime conflicts.

Off-and-on friends Lyrica and K. Michelle will also face off during the season.

As previously reported — Michelle hinted that the feud between herself and Lyrica had been reignited, in October.

Michelle teased that she would be appearing on an unnamed “ratchet reality show” where she will live “N a house with a bunch of random people.” Michelle kept tight-lipped about the name of the show but did tell her followers that she “acted fool” on the new season of the reality series.

She dished a few more details in a subsequent post, writing — “The biggest check ever cut on this particular show for 14days. HONESTLY. But it wasn’t worth my peace. I don’t like untamed humans and I need to stay away from people who NEED the money and attention.”

Lyrica interjected herself and took aim at Michelle, hinting that she was also part of the mystery reality show. She popped in under a post made by “The Neighborhood Talk” account, which shared screenshots of Michelle’s comments. Lyrica spilled more tea for curious followers when she alleged that an altercation went down between the former gal pals.

“Is this supposed to be promo,” Lyrica wrote, cosigning the idea that her role on the show was a low point in her career while bashing her former friend.

“K stop !!!! I tried to kill you cause your mouth is all bark and you hid by security like the coward you are !!!!” Lyrica added. “Me doing this show was low of me especially cause you always gotta act a ghetto fool ! But the check was nice … moving on.”

Fans sounded off about the back and forth, with some guessing that the duo was slated to appear on either “Celebrity Big Brother” or “Marriage Boot Camp.”

Michelle and Anderson’s friendship broke down after tensions rose during a conversation involving a 2017 concert appearance. “Love and Hip Hop” production captured the fallout, in 2018. Michelle reportedly labeled her friend “spoiled” after she arrived late to the venue as the opening act. Anderson stormed out of the room but eventually returned. The ladies then took to their mics to swap high-volume personal jabs. They fired shots about each other’s appearances and Michelle took it to another level when she made comments about Anderson’s troubled marriage to A1 Bentley. Anderson was led out of the room before the fight escalated into a physical altercation.

K. Michelle and Lyrica Anderson’s friendship never recovered, and fans will see what happened next, in March.