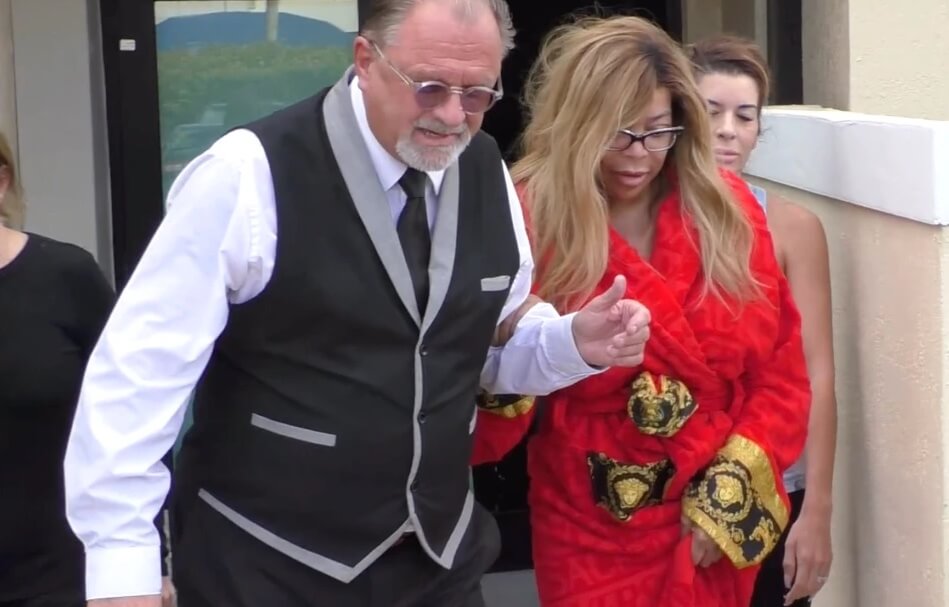 Wendy Williams was spotted leaving a Miami wellness center this week—and appeared to be in a great mood. “The Shade Room” shared a clip of “The Wendy Williams Show” host leaving the facility while being steadied by her driver on Wednesday. The 57-year-old chat show host brushed off a question about the potential cancellation of her show while walking barefoot to her SUV. “The Wendy Williams Show” continues to film with the help of a rotating group of guest hosts. Wendy replied “thank you!” when the reporter wished her well and commented—“everyone does hope you feel better.”

“Wendy is doing fabulous,” she added, speaking about herself as she entered her vehicle. She promised her fans “much more Wendy stuff” before ending her comments.

Rumors swirled about the host’s declining health ahead of her talk show’s October premiere.

Wendy gave fans an update on her condition on social media, assuring viewers that she’d be back in her purple chair when she and her doctors agree that she’s ready to return.

“HOW YOU DOIN’? I MISS YOU ALL! As everyone knows, my health has been a hot topic. I’m making progress but it’s just one of those things that’s taking longer than we expected,” she wrote on social media, last month.

“I’m a woman of a certain age, and I know enough to listen to my doctors and will return to my purple chair as soon as we all agree I’m ready,” Wendy continued. “I want to thank all of my staff and our guest hosts for stepping up and stepping in while I can’t be there.”

“No-one expected ratings to go up 32% without Wendy. The fill-in hosts were just supposed to keep the show’s lights on until Wendy was well enough to return. It was assumed that without Wendy, the audience would not watch, but the has not been the case. In fact, when Sherri Shepherd took over, she not only retained all of Wendy’s fans but also brought in a whole new audience, too. This is why the search has changed from finding a temporary replacement to a full-time one,” a source told Radar Online.

Later reports alleged that Wendy was suffering from the early stages of dementia, but her brother, Tommy Williams, shot down the rumor.

“We haven’t had any alerts like that and I haven’t seen anything like that or have had conversations with her that would lead me to believe that,” Tommy Williams Jr. told The Sun.

Related Items:featured, Jerry Springer., Leah Remini, Michael Rapaport, Sherri Shepherd, Tommy Williams Jr., wendy williams
Vicki Gunvalson Reveals That She And Brandi Glanville ‘Did Not Hit It Off’ At The Beginning Of Filming ‘RHUGT’ Season 2: ‘I Almost Did A Table Flip’!
Tyra Banks TRASHED By ‘ANTM’ Alum Who Claims Contestants Were Only Paid $40 A Day And Had To Pay For Their Own Food!
Comments
To Top
Loading Comments...