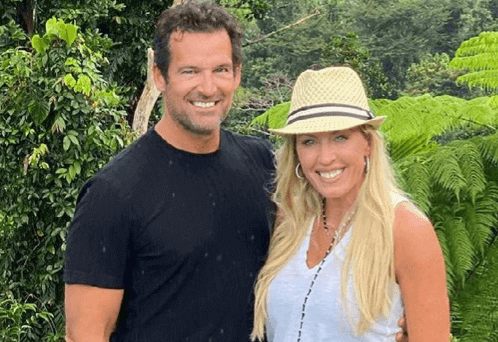 Braunwyn Windham-Burke and her estranged husband, Sean Burke, have been hit by a lawsuit that alleges that the former Real Housewives of Orange County couple owes $45k in unpaid rent. All About The Tea obtained court documents that reveal that Karen Ogden, the owner of the Newport Beach rental, leased by the former Bravo star, filed a civil suit on July 12.

The landlord states in the lawsuit that the couple rented the 5-bedroom/ 6.5 bath, 8000 square foot home in January 2020. The reality stars agreed to pay $15k a month for an eighteen-month lease. The documents claim that Braunwyn and Sean have not made rent payments for three months. Ogden reportedly notified the couple that they would be evicted, last month. The landlord is requesting that the duo hand over $45k or vacate the home immediately.

The news of the filed lawsuit comes after the couple dropped a trial separation bomb, announcing that they plan to live apart for two months. The fired RHOC star shared during an Instagram Live session that she is preparing to pack up and move to Hawaii with the couple’s seven children, while Sean stays behind in California. Sean will live in a Newport Beach rental, owned by Braunwyn’s girlfriend, Fernanda Rocha.

“We are packing up this house, the one we filmed last year, and we are moving. We have decided jointly that we are going to take a few months apart,” Braunwyn said.

Fans know that the last season of RHOC featured Braunwyn’s struggle with sobriety which coincided with the mom of seven coming out as a lesbian.

“We’re going to see what that’s like, living apart for a little while,” Sean said.

“What we would like to do is when this is over, is to get a house that the kids stay in, and then we might go [back and forth],” Braunwyn explained. “We haven’t decided if, after this little experiment of having a few months apart, if we are gonna come back together and live together as friends and family, or if we’re going to just keep the kids in the house and we’ll come in and out.”

“We really want to do what’s best for us — we are family, we’ve been together for 26 years,” she added. “That’s a lot and that’s something we don’t want to minimize — we want to honor that. I think having some space right now will give us some clarity.”

Braunwyn and Sean have not yet responded to the lawsuit in court.