Madison LeCroy accused of affair with MLB star, Alex Rodriguez, aka “A-Rod,” in heated exchange during the Southern Charm reunion.

Kaci Davis, Madison LeCroy’s sister is shutting down rumors accusing the Southern Charm star of having a Florida fling with a retired MLB player. Craig Conover blasted the allegation during the first episode of the Southern Charm reunion, accusing Madison of traveling to Miami for the alleged tawdry tryst.

In a moment captured by Comments by Bravo, Kaci responded to Craig’s Instagram teaser of the reunion episode, where he dished about the alleged affair. Reporter, Brice Sander, asked Craig to identify the married pro baseball player, and Kaci interjected, commenting — “A-Rod’s not married!”

Fans of the Bravo series know that Madison and Craig faced off over the allegation in a heated exchange during Part 1 of the reunion, which aired on Thursday, January 28.

“You were flying around the country sleeping with men, married men. Ex-MLB players,” Craig alleged during the post-season sit-down. “That’s what you were doing during quarantine.”

“You know why [your ex] Austen [Kroll] was at my house? ‘Cause you weren’t talking to him! You flew to Miami to  f—k an ex-MLB player,” he  added.

Austen commented that Craig’s story was “the goddamn truth,” but Madison vehemently denied the accusation.

“Give me a name! Put me on a lie detector test,” Madison fired back. “I never flew to Miami. Where’s the record of that? That’s fake.”

Craig and Austen alleged that Madison had flaunted messages that she had allegedly received from the heavy hitter. Bravo bleeped out the name revealed during the aired exchange.

“He contacted me and, yes, we DM’d, but other than that, there was nothing,” Madison explained. “I’ve never physically seen him, touched him.”

Austen went on to insist that Madison connects with famous athletes all the time, via FaceTime, and the hairstylist clapped back, claiming that she’s “not a f–king liar” and “will stand up for that.”

Interestingly, Madison’s alleged fling with A-rod comes on the heels of a revelation that she had seemingly hooked up with Jay Cutler. She posted screenshots of her alleged text exchange with the former NFL star on social media. 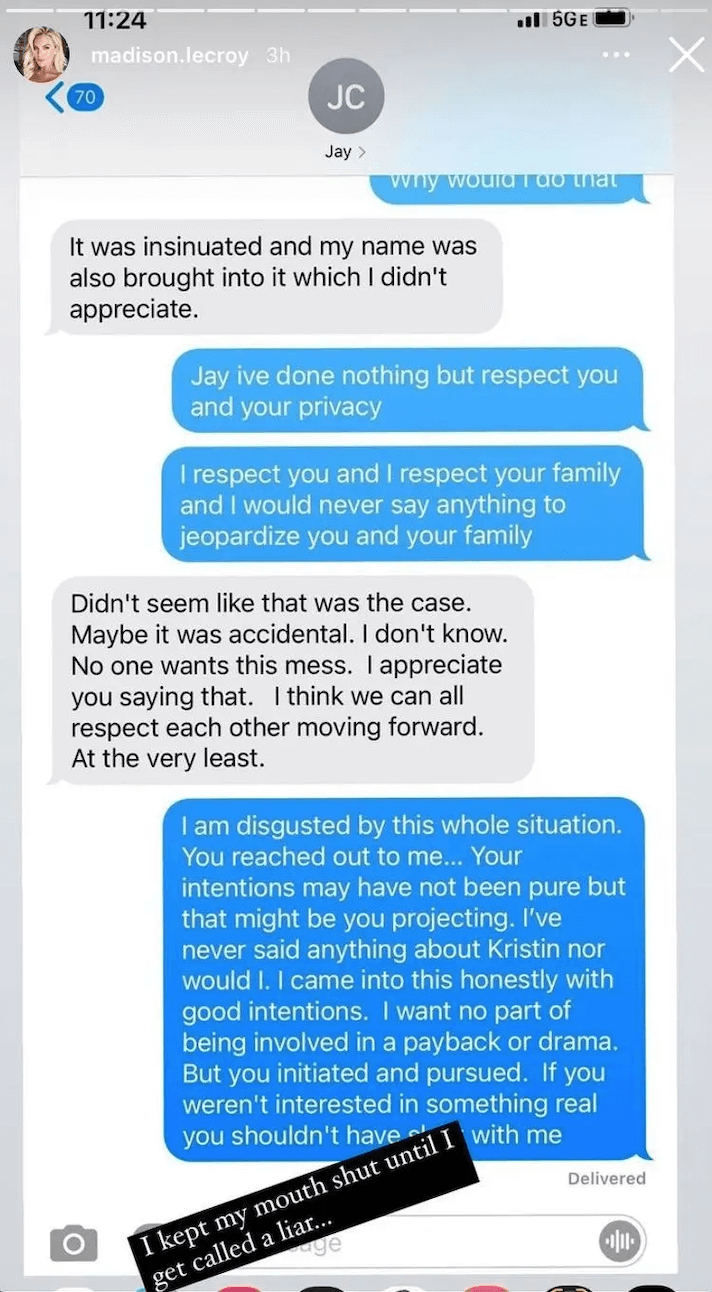 According to a report by Us Weekly, Madison had a “new, flirty thing” with Cutler, per a source.

“It’s nothing serious at this point,” the snitch dished. “But they’re having fun getting to know each other.”

Madison made occasional appearances on the show before becoming a cast member in 2019, after she began dating Austen Kroll. The couple’s rollercoaster romance eventually crashed, and they broke up in December 2020. Viewers of the Charleston based reality series know that Craig Conover was pushing for a breakup from the sidelines, as Season 7 played out.