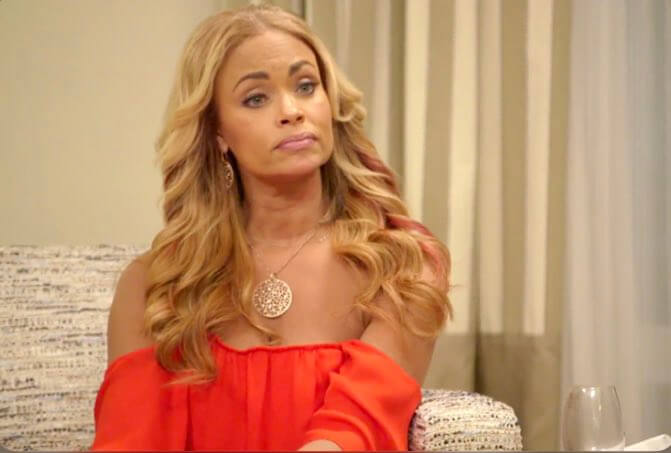 Gizelle Bryant spilled some preview tea about the upcoming Real Housewives of Potomac reunion, dishing on a recent episode of “Bravo’s Chat Room.”

RELATED: Andy Cohen Reveals Who’s Seated Next To Him During RHOP’s Season 5 Reunion!

Gizelle shared that she was put through an emotional wringer after a tumultuous Season 5.

“A major [breakdown] recently, and you guys will see as a little tease to the reunion, is I was sitting there very nice and pretty and everybody and their grandmother was coming for me for about eight hours — and then in the last two to three hours, I just lost it,” Gizelle dished to her co-hosts. “Wait and see, it was a doozy… it didn’t go well for me.”

Robyn Dixon also leaked some reunion details on a recent episode of Watch What Happens Live.

“There’s so much to watch. I just want to say, being in that room, I was happy to finally let everyone say what was on their minds,” Robyn revealed. “Hopefully we can move past everything.”

“I was really amazed by how dramatic it was when the husbands came,” Andy said to Robyn.

Fans watched the cast blowout between Monique Samuels and Candiace Dillard Bassett earlier in the season, and the midseason trailer hinted that Chris Bassett and Ashley Darby’s husband, Michael Darby, might be headed in the same violent direction.

“I think people will be really surprised by the finale,” Andy said, hinting at the drama teased in the trailer. “They don’t even know what’s in store for the finale. I mean that was some… yeah.”

The revealed reunion seating chart had fans scratching their heads about Andy’s decision to seat Gizelle and Karen Huger in the top hot-spots—on either side of the host. Robyn was seated next to Karen alongside Ashley and Monique, despite Robyn backing Candiace and Gizelle all season.

Related Items:#RHOP, featured, Gizelle Bryant, Real Housewives of Potomac, Robyn Dixon
‘RHOP’ RECAP: Karen Screams ‘F*CK YOU’ To The Ladies After Being Accused Of Setting Up Monique and Candiace By Inviting Them Both To Her Wig Party!
‘Girl Get A Life!’ Karen Huger SLAMS Accusations That She Set Up Monique and Candiace At Her Wig Party!
Comments
To Top
Loading Comments...