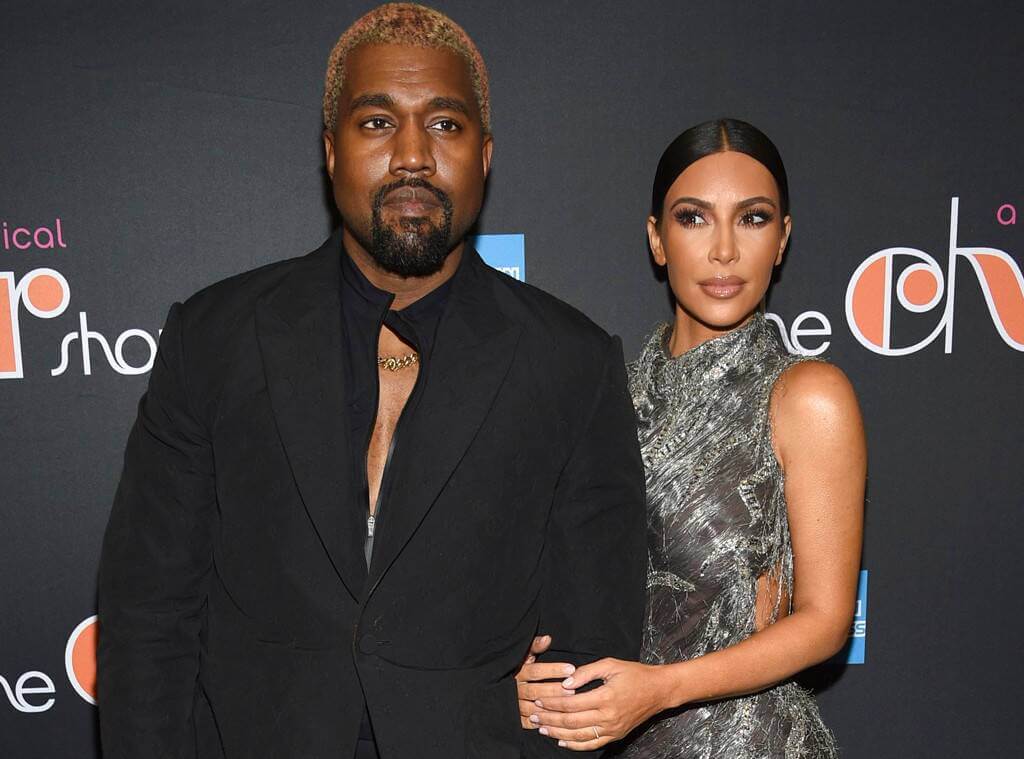 Kanye West had another maniac meltdown on Tuesday. He claims Kris Jenner is ghosting him, so he spilled tea on the family matriarch by revealing a shocking detail regarding his marriage with Kim Kardashian.

Kanye West called Kris Jenner a “devil,” and vowed, “EVEN IF I NEVER SEE MY KIDS TILL THEY ARE 18 CAUSE YOU BELIEVE WHITE PEOPLE ON GOD NORTH WITH NEVER BE EXPLOITED BY THE SYSTEM OF WHITE SUPREMACY.” Kanye then posted a screenshot of an unanswered text he sent Kris. In the messages, Kanye threatens to “go to war” if Kris continues to ignore his messages. 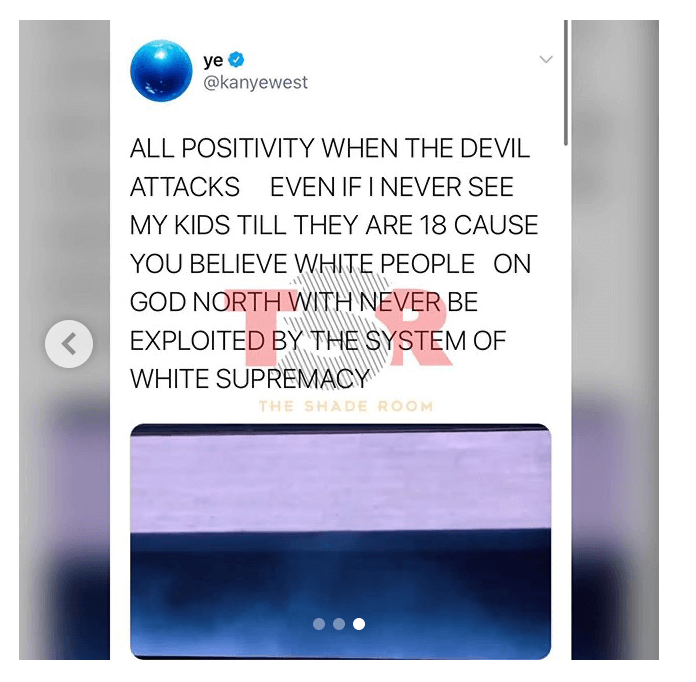 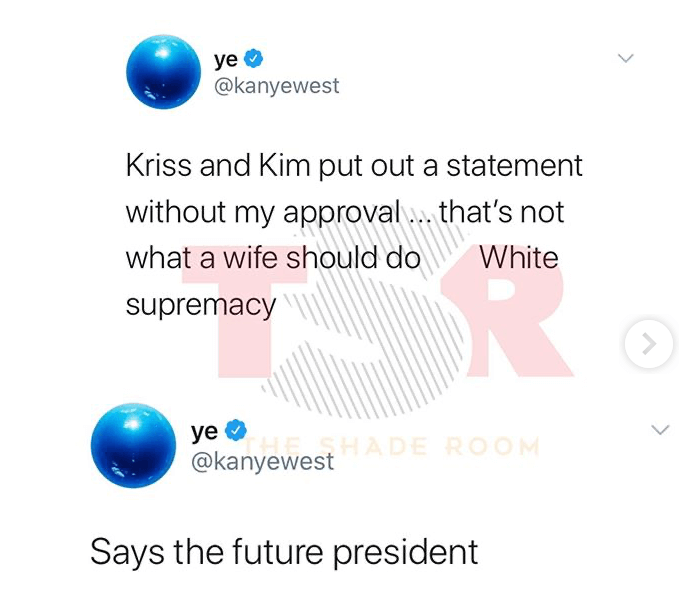 He continued, “MJ told you about Tommy before they killed him Kim saved my daughters life in the name of Jesus It’s Gods choice only I will live for my children Kris I’m in Cody if your not planning another one of your children’s playboy shoots.” 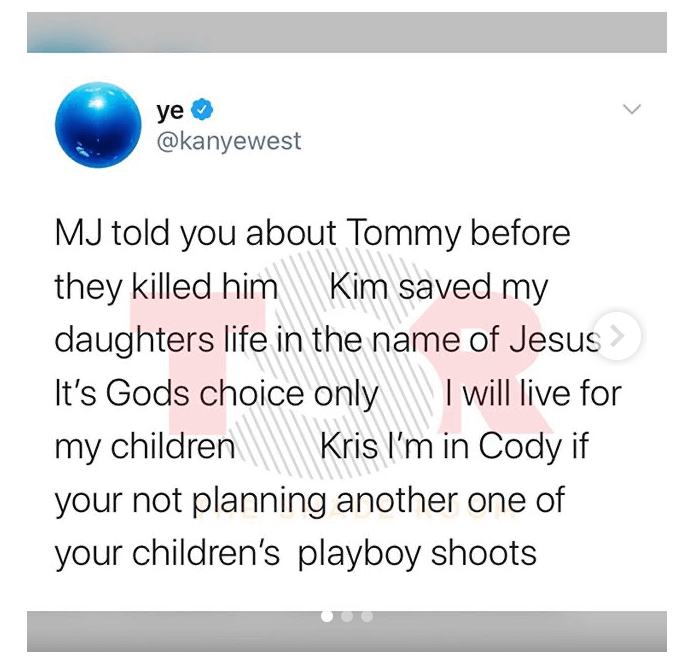 Kanye West then tweeted the names, Drake and Larsa Pippen, along with a thinking emoji — leading many to speculate about the salacious connection.

In another tweet, Kanye West dropped a bomb — he’s been trying to divorce Kim Kardashian since she had a meeting with Meek Mill at a hotel. “They tried to fly in with 2 doctors to 51/50 me. I been trying to get divorced since Kim met with Meek at the Warldolf for ‘prison reform’ I got 200 more to go,” he wrote on Twitter.

He then called Kris Jenner “Kris Jong-Un” — he tweeted, “This my lady tweet of the night … Kris Jong-Un Lil baby my favorite rapper but won’t do a song wit me.” 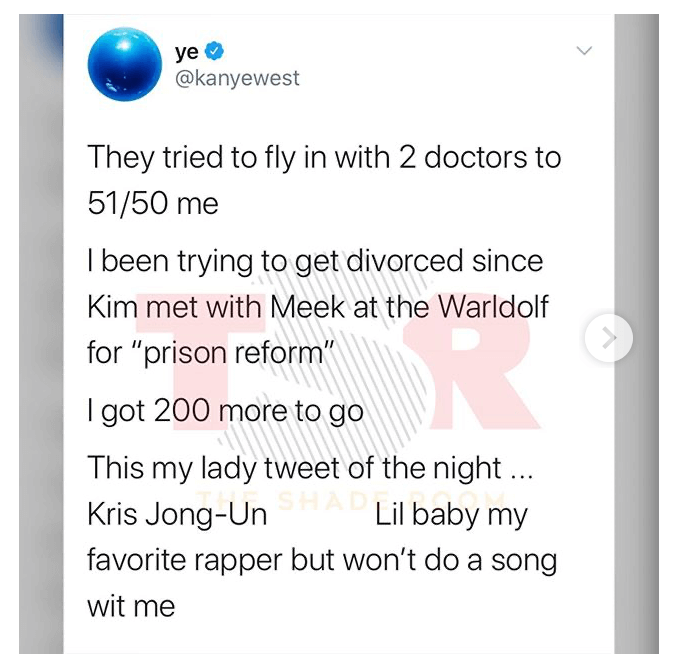 However, he’s not holding a grudge against Meek, “Meek is my man and was respectful That’s my dog Kim was out of line I’m worth 5 billion dollars and more than that through Christ But ya’ll ain’t listen to MJ and now ya’ll believe them???” the hip-hop star wrote, before saying that Kim “went out of line” because she and Kris allegedly put out a statement without his approval. 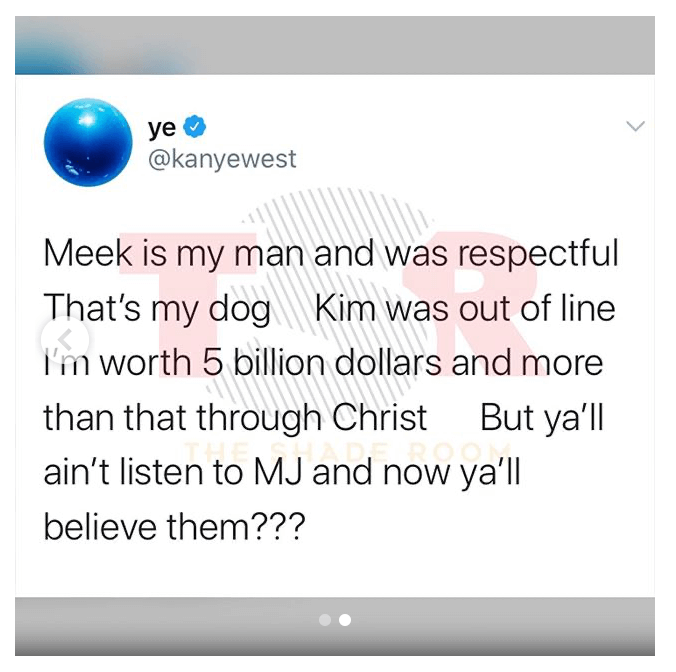 Kanye West later deleted his tweets and the Kardashian family has remained silent since Kanye started spiraling over the weekend.