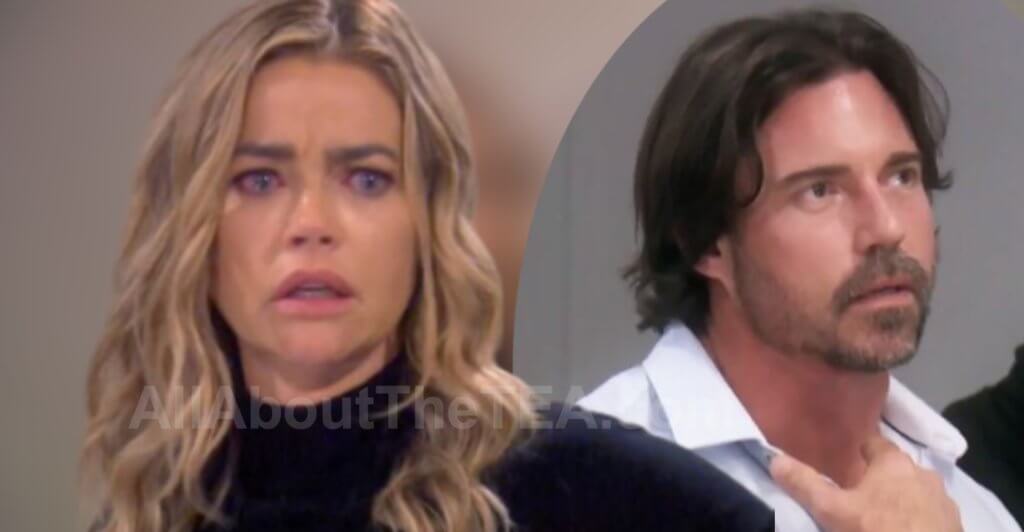 Denise Richards has been feuding with her co-stars on The Real Housewives of Beverly Hills — but according to a new report, her marriage is also on the brink of collapse.

Denise Richards’ relationship with her husband, Aaron Phypers, is “hanging by a thread” according to a report by All About the Truth. Their marriage has been reportedly battered by Denise’s alleged affair with RHOBH alum, Brandi Glanville, and while Denise has denied the fling, the ordeal has purportedly left Phypers “embarrassed” and “angry.”

An insider dished about the behind-the-scenes discord to Star Magazine, claiming that Aaron Phypers is struggling to believe that Denise Richards  is telling the truth.

“Denise maintains it never happened, and Brandi made it up,” the source reported.

“When he’s angry, he can’t articulate his emotions,” the insider said about Aaron Phypers, adding that the couple no longer shares a bed.

“It’s put Denise in an awkward spot because she swore to Aaron there was no affair, but Brandi’s blabbing makes it look like Denise is lying,” another source told OK! Magazine. “Regardless of what may or may not have happened, he’s sick of it and embarrassed.”

Denise Richards was accused of having a months long affair with Brandi Glanville, who alleged that Denise told her that she was in an “open marriage” with Phypers. Preview clips of the series point to Denise abandoning the cast during a Rome vacation, after they confront her about the rumored  relationship.

Social media erupted after Phypers threatened to “crush” Denise’s hand, after storming away from a contentious cast barbecue hosted by Kyle Richards. The show dropped on that cliffhanger, but will return next week, after a production hiatus.

The Real Housewives of Beverly Hills returns on July 8th, on Bravo.