Over three weeks ago, Kathryn Dennis, promised to address the controversy via a released statement — but never kept her word.

The messy Southern Charmer finally resurfaced on Twitter late Sunday night and had plenty to get off her chest.

After her solidarity message, Kathryn Dennis, revisted the racist allegations levied against her with a familiar apology.  “Honestly I never realized the monkey emoji was racist. Obviously I was wrong. I’m sorry. The conversation I had was distorted and completely taken out of context and now I’m being called all these things that I am not.” She shared on May 31.

She then thanked her 199K Twitter followers for educating her about her ignorance. She wrote, “I really appreciate people who correct me and teach me because without them I might have been repeating mistakes for a long time.”

The 28-year-old played victim again and tried to justify her actions. 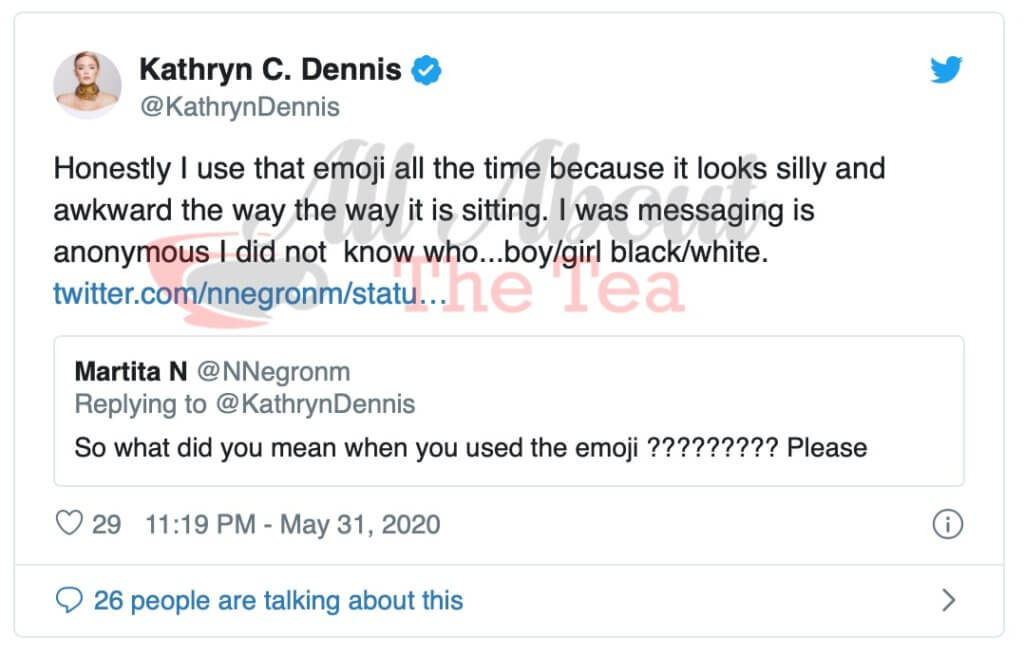 Kathryn Dennis, scrapped with black radio host, Mika Gadsen, in early May, over a South Carolina  boat parade event supporting President Trump. The Bravoleb sent the radio personality a monkey emoji in one of the messages, and Gadsen shared the exchange with her followers. Kathryn was immediately thrashed on social media, and issued a weak apology after many fans demanded that Bravo take action, and fire the reality star.

“I want to acknowledge that using a monkey emoji in my text was offensive, and from the bottom of my heart I sincerely apologize to anyone and everyone I hurt, Kathryn wrote at the time. “Although the context was not my intention, there are no “if ands or buts” that excuse me. I did not give it thought, and it was and is wrong. I know I am not that person. I know and will do better.”

Kathryn Dennis, lost a lucrative local job in the wake of her exposed comment — and  decided to speak out again, on May 17th.

“I use that emoji all the time bc it looks silly and awkward and that’s my baseline. The account was anonymous I didn’t even know who I was messaging??? And now I’ve been labeled all this crazy stuff and it’s just not true. And it’s not fair. And I see now that I’m back on IG that some**** people are thrilled to use this situation to come up on their own. Use for their own benefit,” Kathryn said.

Kathryn Dennis then promised to release a “full statement” the following day.

“But I’m not gonna let that happen. Never have never will. I’m making a full statement tomorrow but I had to respond bc I cannot stand my character being annihilated. Please just be patient and know this shit is just not true.”

Three weeks have passed — without a single peep from Kathryn Dennis.

Many fans called out Kathryn Dennis’ inappropriate timing considering America is in turmoil over the death of George Floyd. In addition, people are not buying her apology and shameless victimhood. 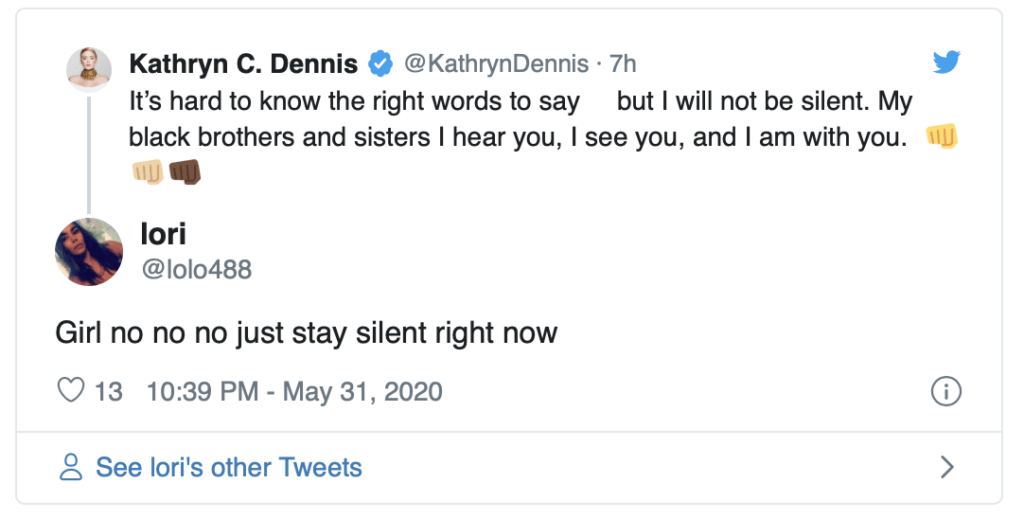 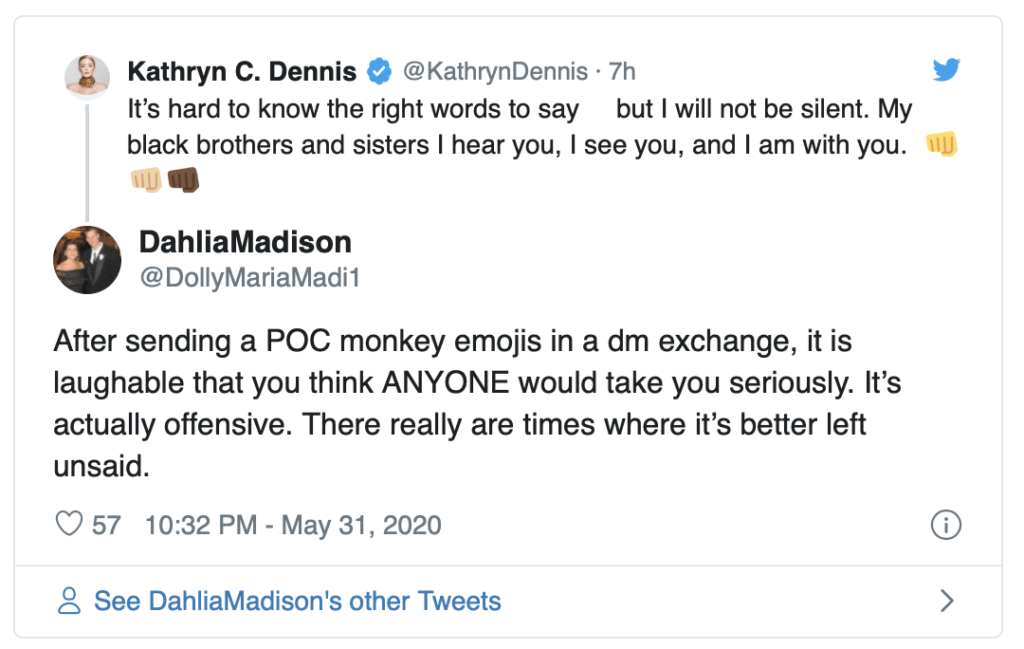 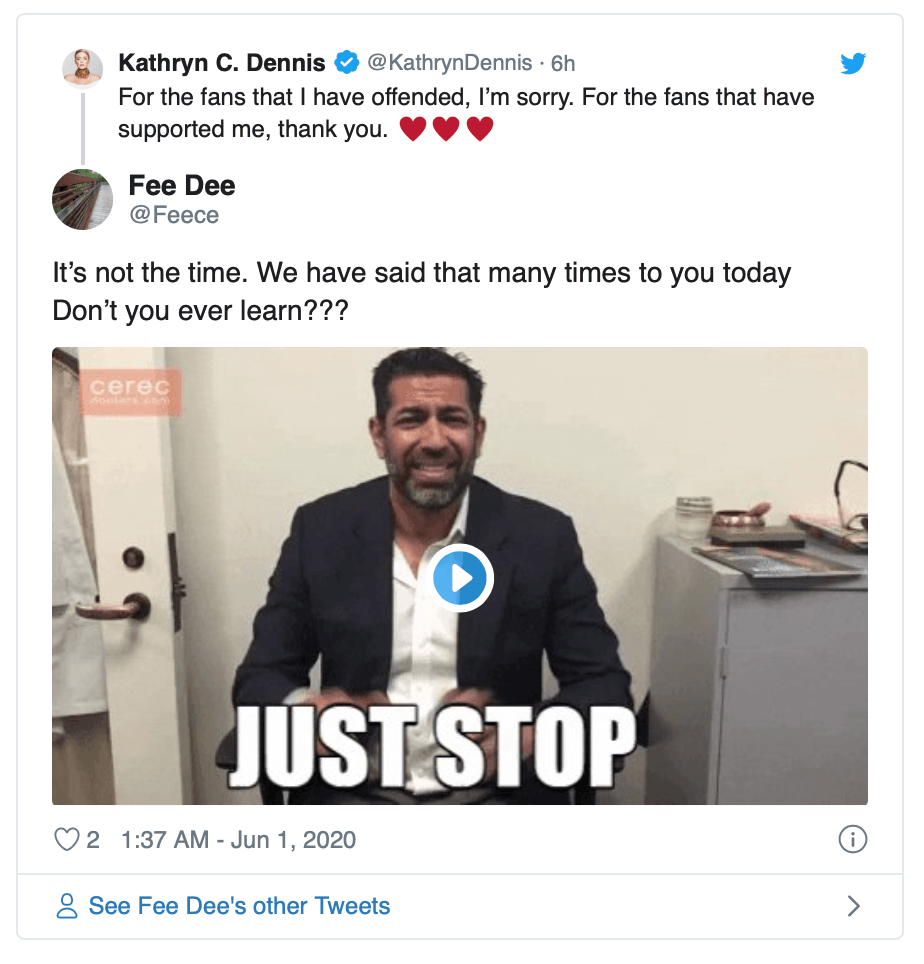 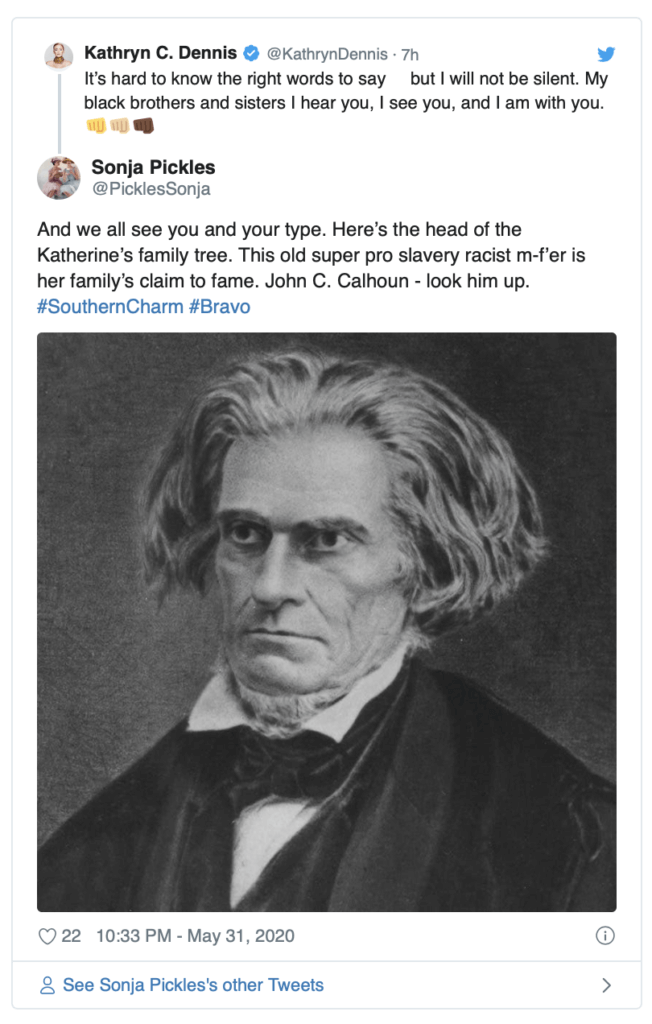 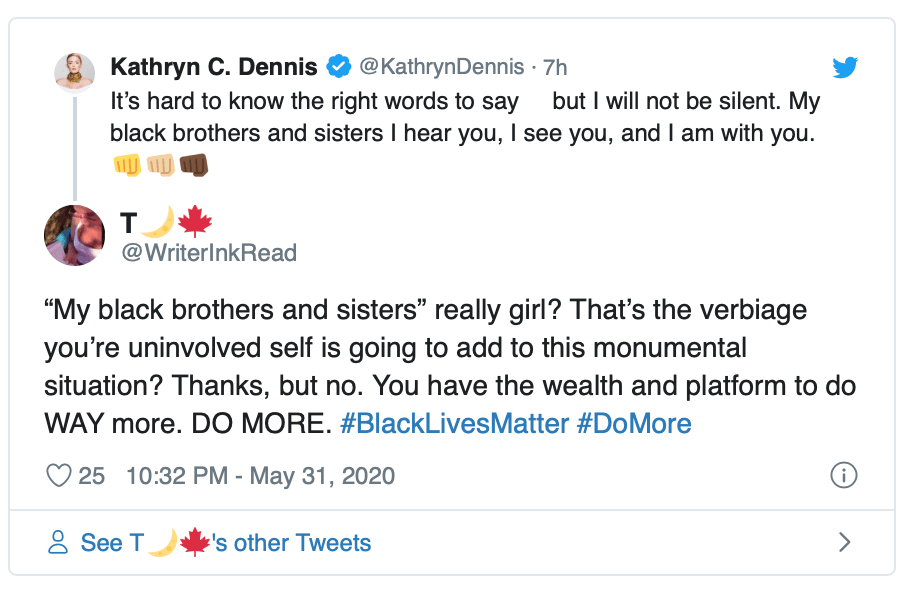 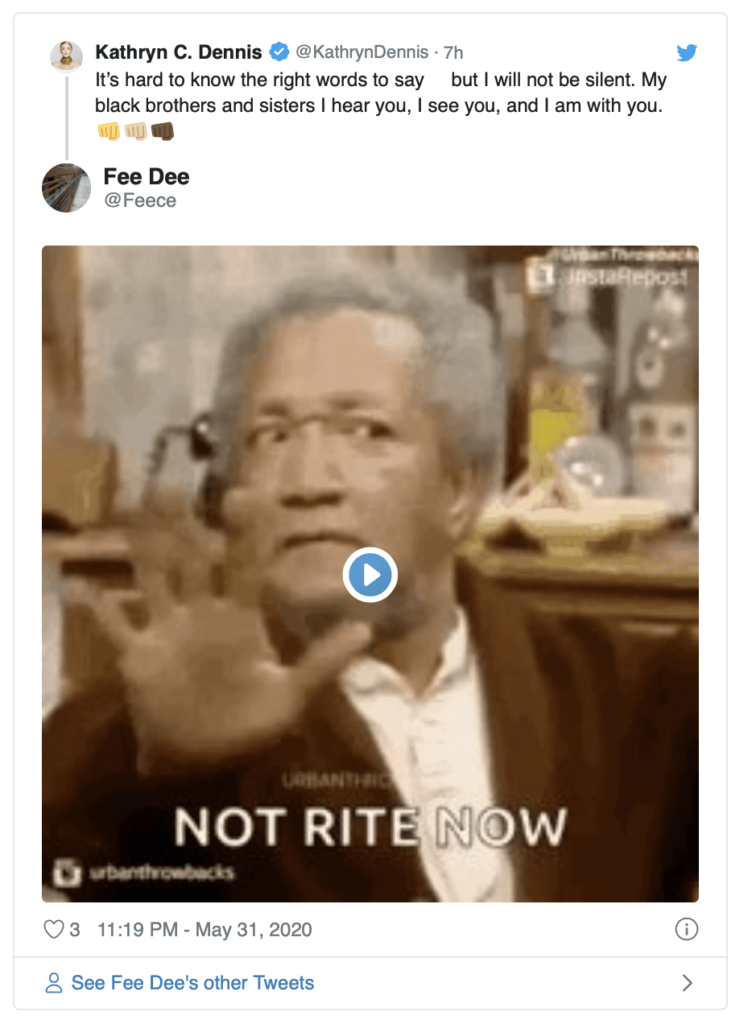 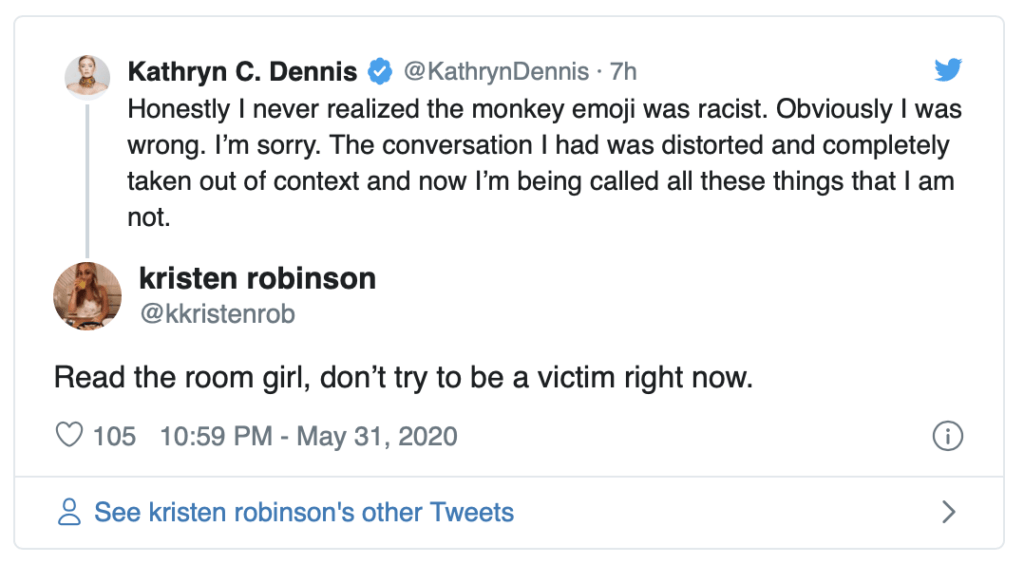 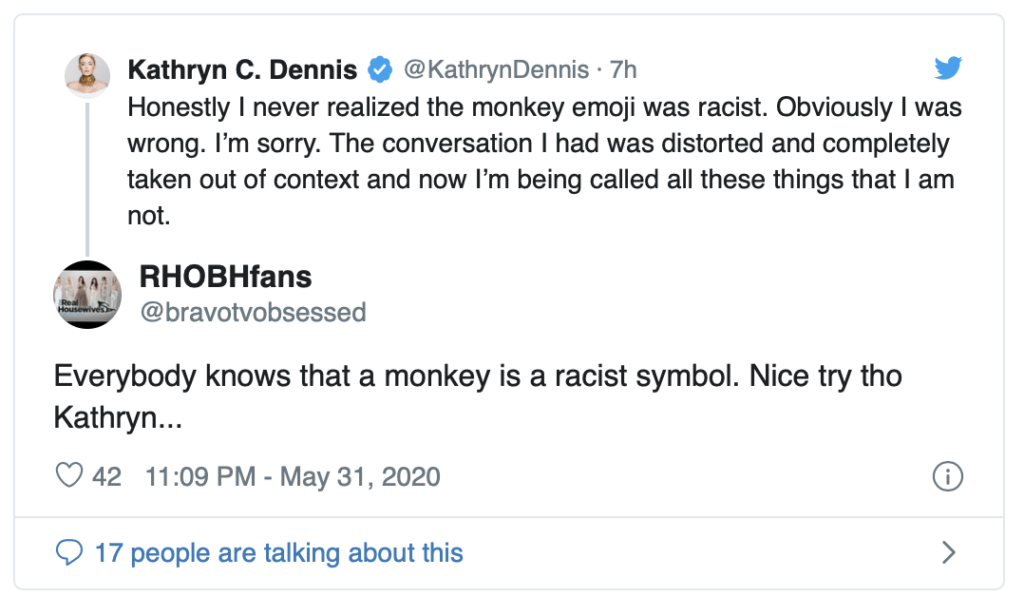 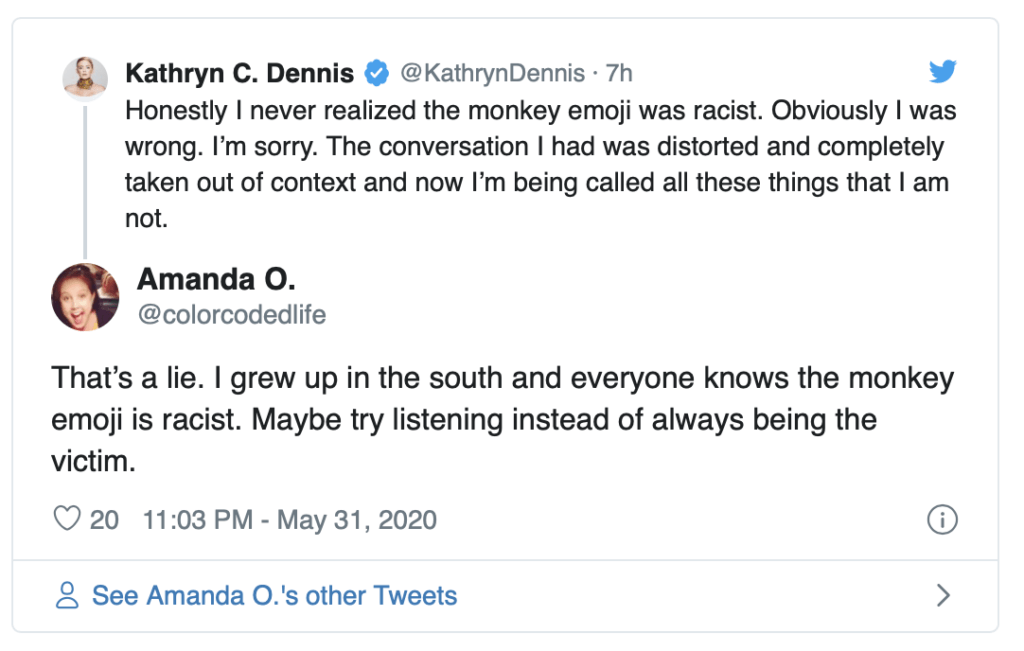 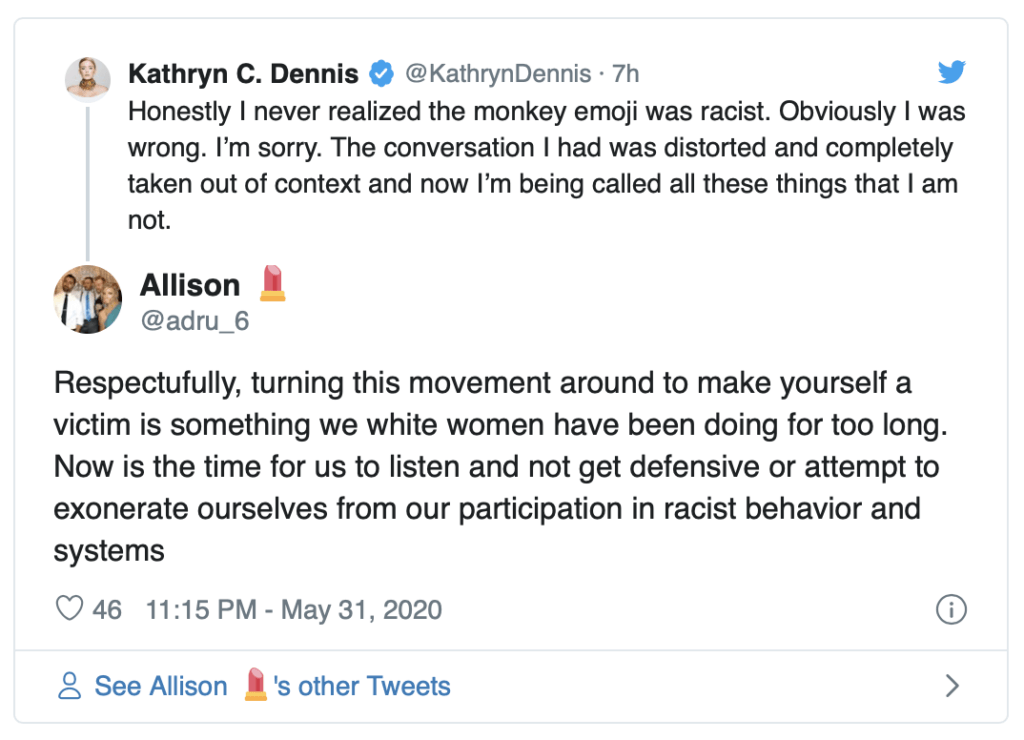 Southern Charm production was put on pause amid the coronavirus shutdown. The show’s return date has not been announced.