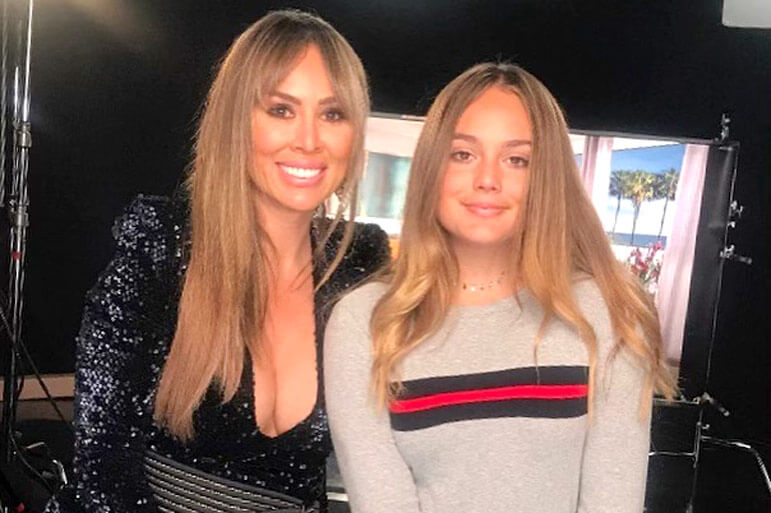 Kelly Dodd’s daughter, Jolie Dodd, slid into AllAboutTheTEA.com’s DM on Wednesday and things got heated with the teen unloading a mouthful about the brewing custody battle with her father, Michael Dodd.

As exclusively reported, Michael Dodd is seeking custody of their daughter, Jolie, 13, over major concerns of Kelly Dodd’s negligent parenting.

Kelly Dodd has been recklessly flying between California and NYC to foster a romance with fiancé, Rick Leventhal, during a global pandemic while leaving her child behind. NYC is the epicenter of the outbreak with the highest death rates. This among other allegations has Michael Dodd very concerned for his daughter’s well-being.

After AllAboutTheTEA.com’s report was published, Jolie Dodd, reached out to the site via Instagram Direct Message (DM) and revealed some shocking info.

According to the 13-year-old, the custody case goes to court next month in June and she describes her father as a monster. 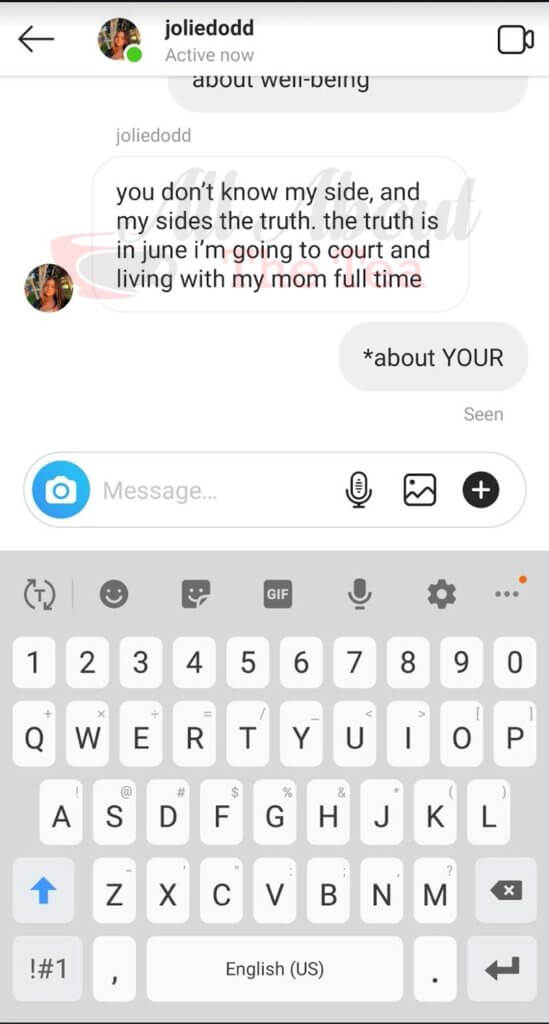 In the text below, Jolie Dodd claims her father abused her and there are police reports on file. 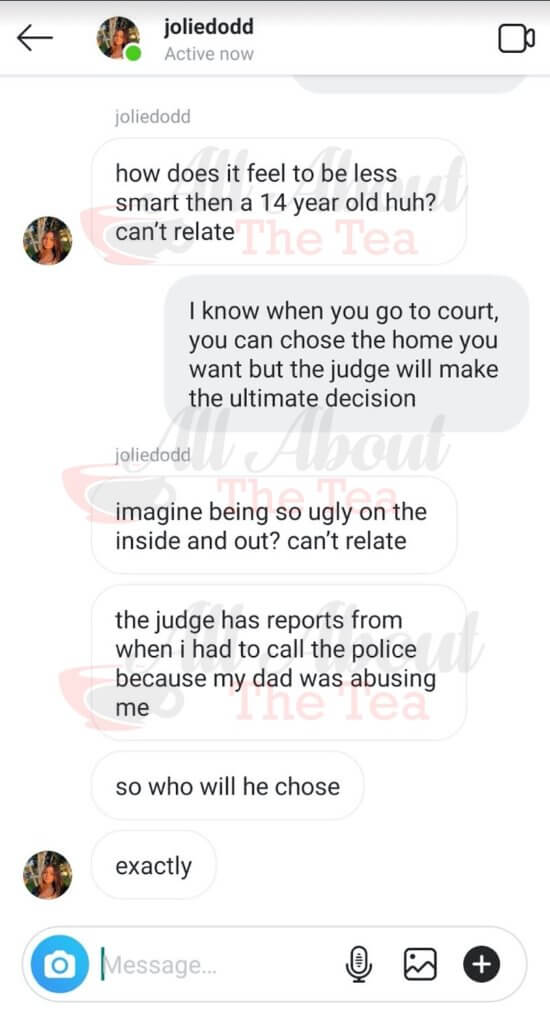 Jolie Dodd hurled profanity towards the site in many of her messages. 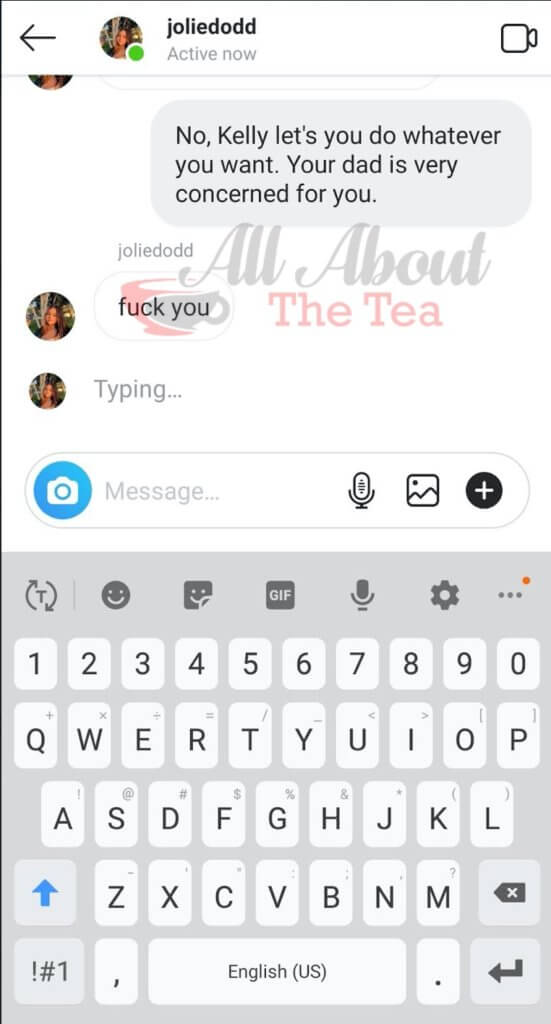 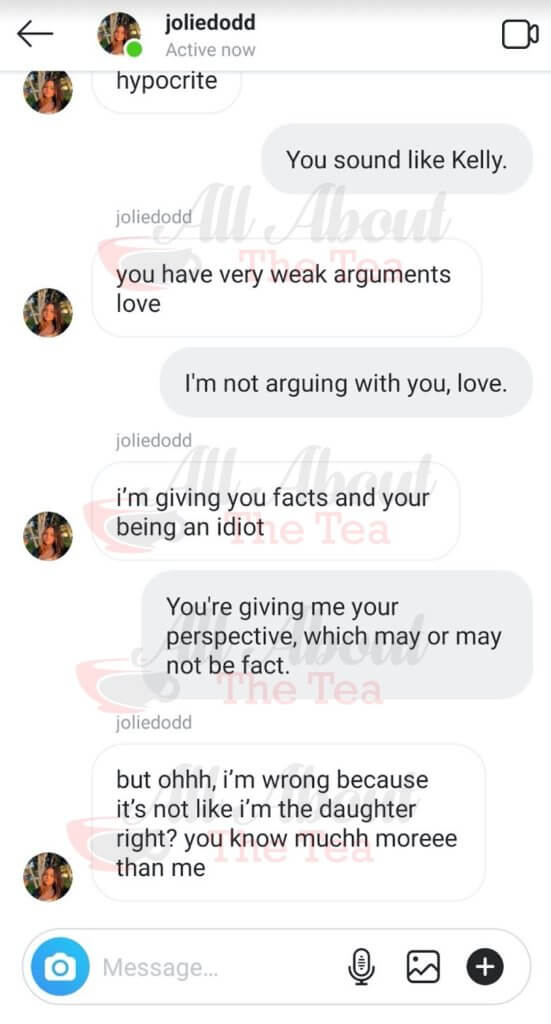 In the following message, Jolie Dodd says her dad called her fat, ugly and worthless. Additionally, she accuses her dad of choosing work over his family. 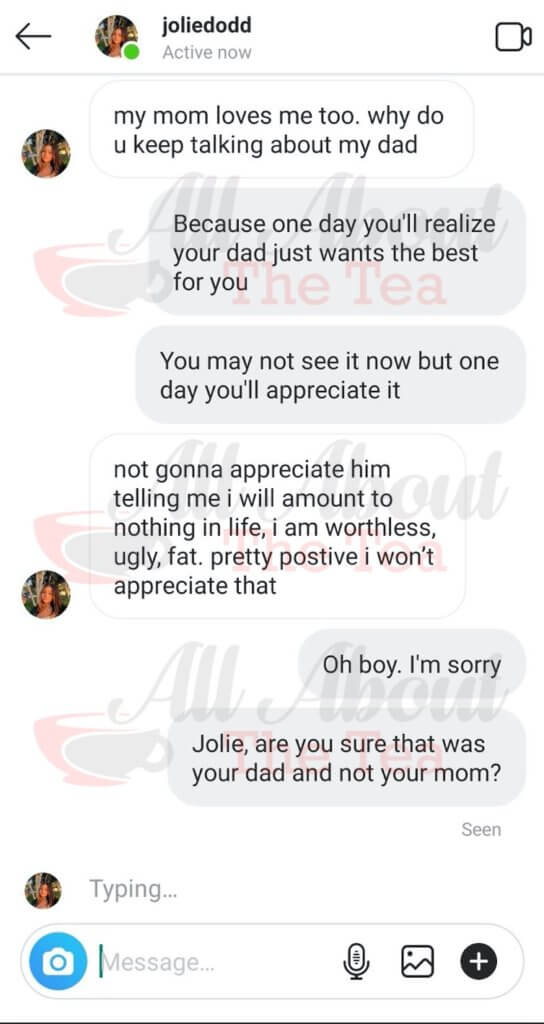 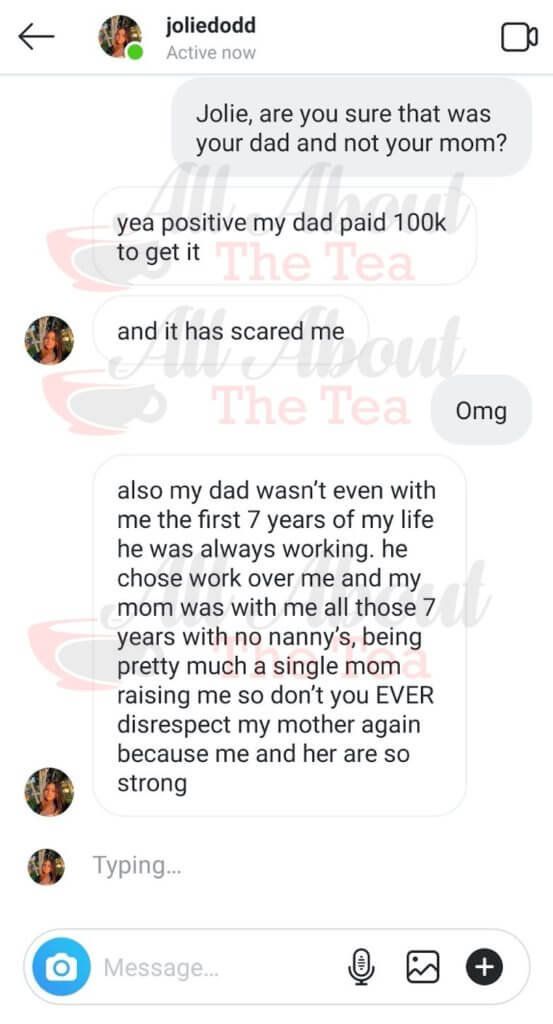 The pre-teen ferociously defended her mother not being by her side during a world pandemic. 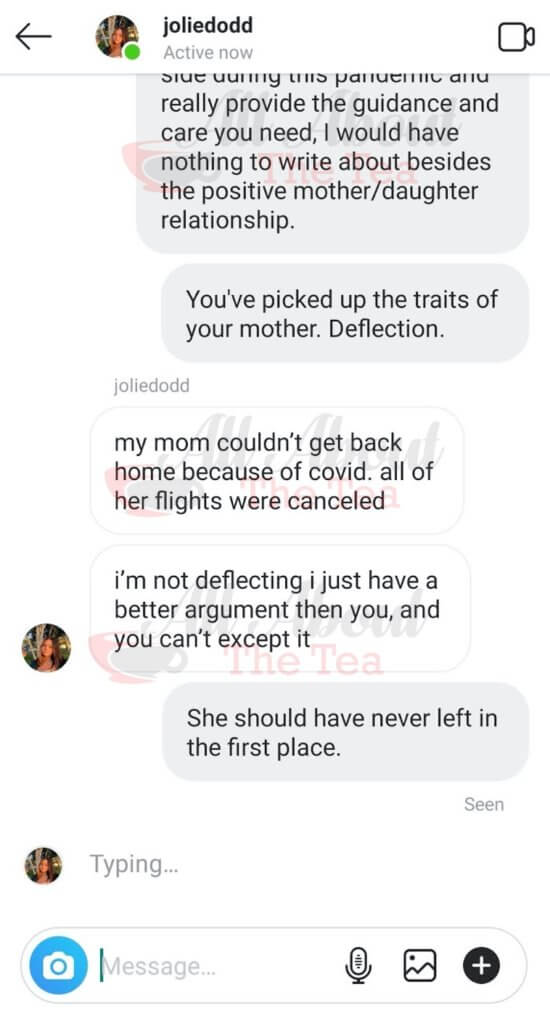 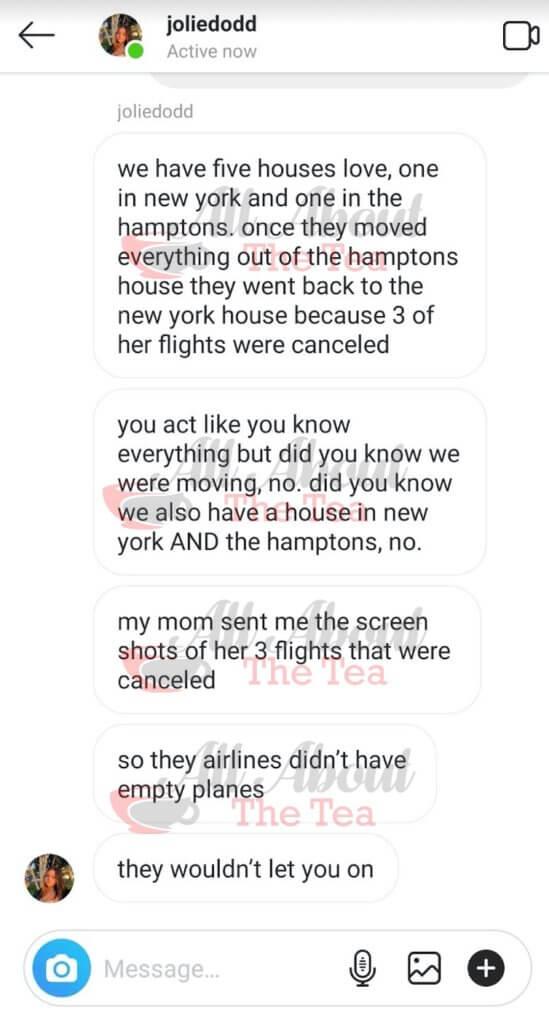 Jolie says she will ask the court to live with her mother. California courts must consider a child’s preference when the child is of sufficient age and ability to voice an intelligent opinion on custody or visitation. If a child is at least 14, he or she will always be allowed to state a custodial preference. Jolie turns 14 next month. 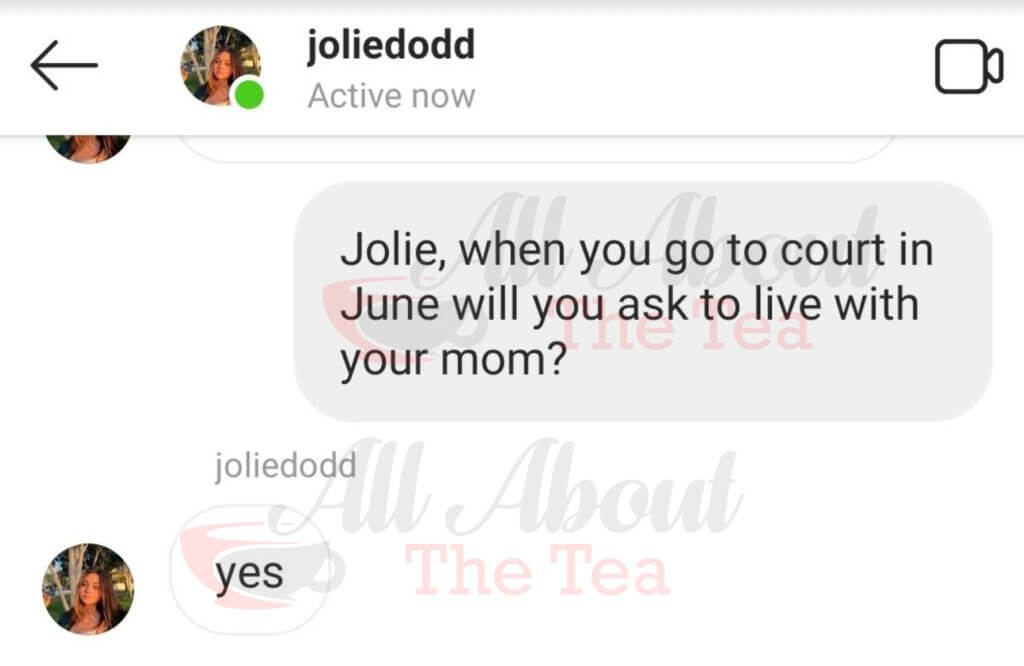 Jolie also revealed that her dad made her get a “730 Evaluation” when she was 5-years-old as part of a previous custody battle with her mom. A “730 Evaluation” is a study of the family, it’s members and their relationship with the intent of restructuring parental rights and responsibilities concerning their children. It is requested by the parents or ordered by a judge when parties cannot decide on the best custody arrangements for their child. 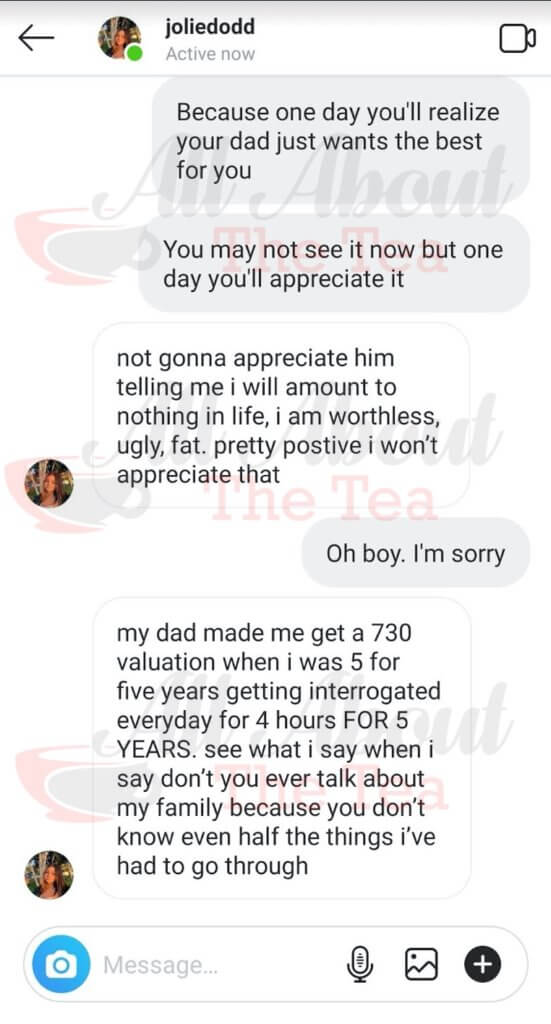 Jolie also took aim at AllAboutTheTEA.com for publishing her family business despite her mother being a reality star. 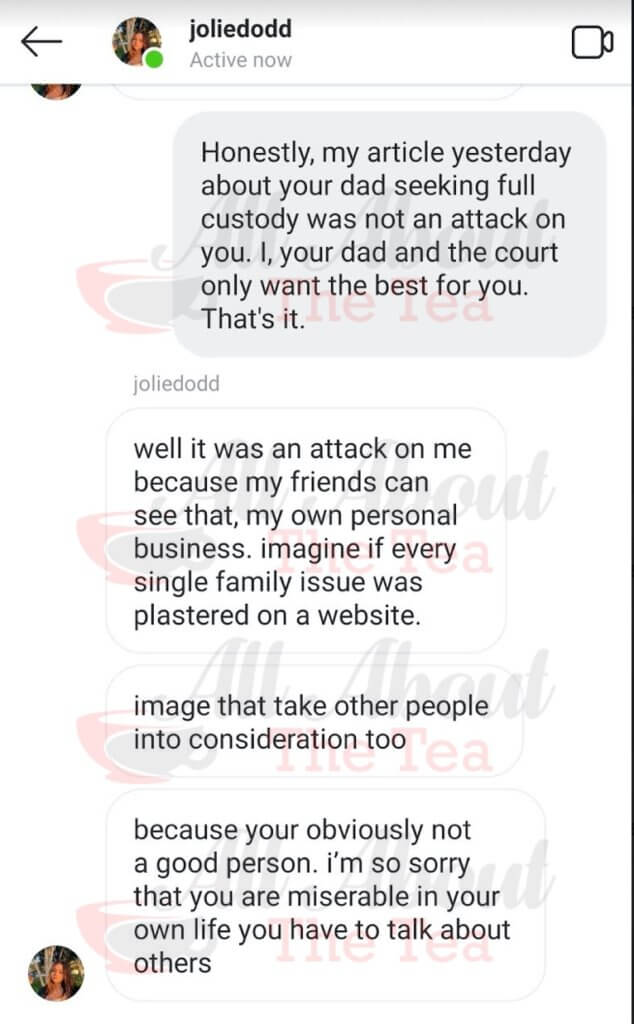 A source tells AllAboutTheTEA.com that Michael believes Kelly Dodd is an unfit mother.

Fans slammed Kelly Dodd in March for traveling to NYC during the expanding international health crisis, leaving her 13-year-old daughter behind and saying Coronavirus was ‘God’s way of thinning the herd.’