Real Housewives of Orange County public enemy number one, Kelly Dodd, believes she’s “the sh*t” despite the hate she gets from “trolls.”

Kelly Dodd’s latest controversial statements is from a meme of Jason Bateman saying, “You know you’re the s**t when people who don’t even know you, hate you.” She captioned the Instagram post, “Pretty much!” 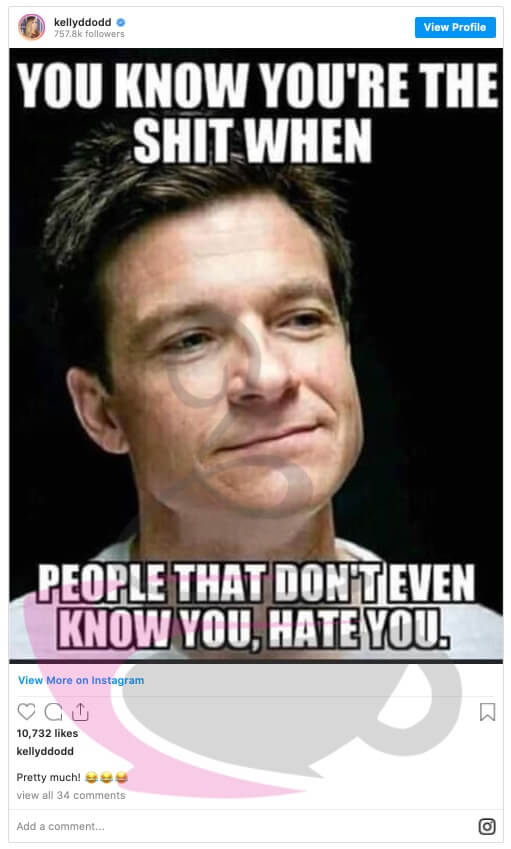 As AllAboutTheTEA.com readers know, Kelly Dodd, 44, was recently dragged by social media for classifying the coronavirus as “God’s way of thinning the herd!”

“Do you know how many people died from the H1N1, the swine flu or SARS?” Kelly added. “It’s 25% get your facts straight you are only hearing numbers not the reality! It’s God’s way of thinning the herd! If you are vulnerable or compromised stay inside. If you don’t protect others by wearing masks and gloves keep your distance and don’t go out if you are ill! It’s common sense!”

As previously reported, Kelly Dodd flew to New York during the coronavirus outbreak to be with her fiancé, Rick Leventhal, and left her 13-year-old daughter, Jolie, behind in California.

Kelly Dodd’s followers were quick to call her out for flying during COVID-19 — then she posted a video of herself getting a COVID swab test. She also claimed she’d survive the virus if she got it.

“If it’s dangerous why are the airlines still flying?” Kelly Dodd wrote here. “You think I want to fly? I had to get back, how is that elitist? People are so judgmental it’s sick!”

Kelly Dodd and Rick Leventhal were spotted all over NYC and in the Hamptons amid the coronavirus breakout. They’re planning to marry this October.

Real Housewives of Orange County fans wasted no time blasting the reality diva for abandoning her kid during a global health crisis.

“Yes being across the country from my child during a pandemic is exactly what I would want to do.” Another called her out.

Others said: “Yay. Head to NYC spread a little covid why don’t you, brains right there…ffs.”

After recieving a public spanking, Kelly Dodd walked back her reckless rant with an apology. Press play below to watch.

Real Housewives of Orange County is currently on hiatus.