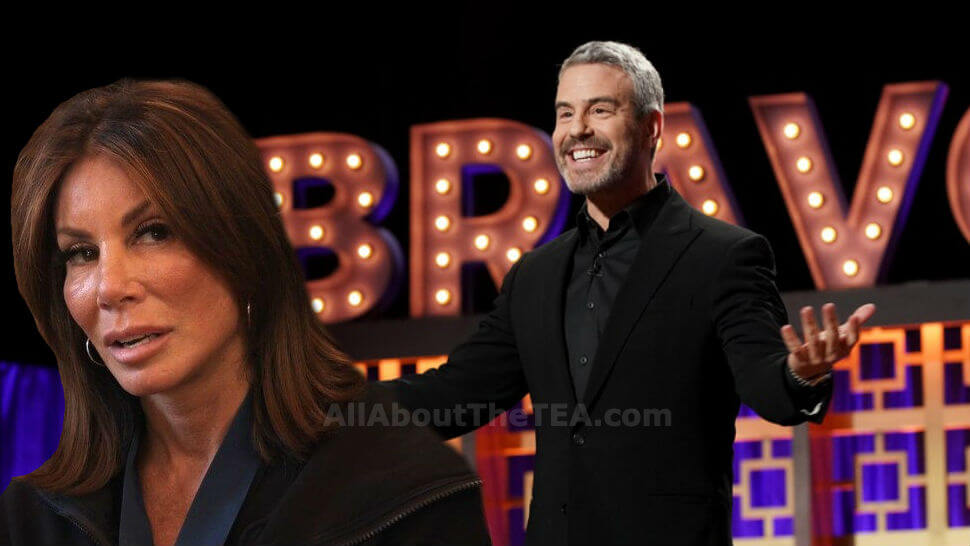 Bravo hosted their first annual BravoCon convention over the weekend that brought together some of your favorite Bravolebs. And while the event was a success on the surface, drama erupted behind the scenes among the ladies of The Real Housewives of New Jersey.

Danielle Staub, 57, was not invited to the all-star event and the snub sent her into complete meltdown mode, AllAboutTheTEA.com can confirm.

“She’s [Danielle] home having a meltdown because she wasn’t invited to BravoCon.” A source tells AllAboutTheTEA.com. “Danielle’s off the rails and lashing out because no one on the cast speaks to her anymore.”

Danielle was triggered by fellow co-star, Margaret Josephs, discussing their on-screen blowout that involved calling each other whores during last Wednesday’s episode.

Danielle fired shots at Margaret Josephs on her Instagram Story, in a lengthy rant along with a screenshot of Margaret talking about Danielle during a BravoCon panel, “This just in from the real “prostitution whore” Margaret Josephs sleeps w married men tells her husband 4 years later… Destroyed 2 families, supports other women who cheat on their husbands, steals a logo, takes $216 from a friend 3 years ago, no attempt or care to pay them back! Sold her soul to the….wait she is the devil.” Danielle posted in a since-deleted rant. 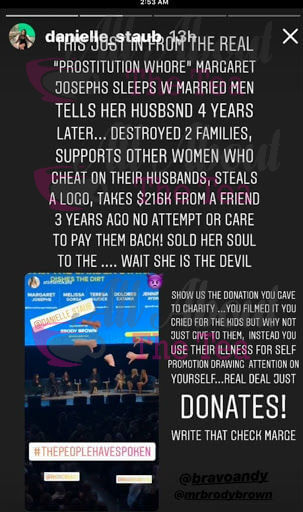 AllAboutTheTEA.com can confirm that Teresa Giudice has ended her friendship with Danielle Staub. Teresa was Danielle’s only friend left on the cast and now that they no longer speak, Danielle doesn’t fit in with the group anymore.

“The fact that they used her images on the big screen, her past life and her story to sensationalize the NJ segment without her being able to speak up, or defend herself, was pretty sh*tty.”

The source continues, “Can some of the wives exist on the show with their own stories? Some don’t have any so they retreat to her story, like a pack of wolves. As much as Danielle caused a lot of her own problems, the way a few of the cast members are leaning on her story, because they don’t have one, behind her back is cowardly.”

What do you think of Danielle Staub’s meltdown and attack on Margaret Josephs? Sound off below!