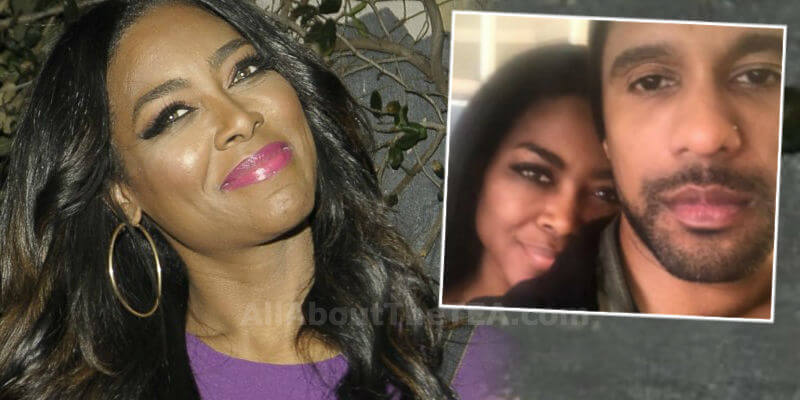 Kenya Moore is finally speaking out after Marc Daly dumped her at the end of September.

The Real Housewives of Atlanta star and the Brooklyn resturantuer announced their split on September 19. As AllAboutTheTEA.com has exposed for months prior to the breakup, the couple’s relationship was in major crisis and their ‘happy marriage’ facade would soon crumble. In this week’s newsstand issue of PEOPLE — Kenya Moore claims divorce papers have not been filed yet and she’s hopeful for a reconciliation.

“I didn’t get married to quit,” Moore says. “I love my husband. I don’t doubt that he loves me. Let me be clear, I took my vows seriously. I believe in for better and for worse and I believe in trying it all before you walk away, especially when we do have a child and we are a family.”
Unfortunately, she “doesn’t get the sense that [Daly] feels the same way.

“I am hopeful, and have always wanted to work on our relationship. But I just don’t know if that’s even a possibility at this point, honestly,” Moore admits. “Marc doesn’t seem to be there. I’d feel more comfortable calling it quits if I knew I’d tried everything and it still didn’t work. And we definitely didn’t do everything we could have done to save our relationship.”

Marc Daly made a statement to People magazine, on September 19, regarding the split.

Kenya Moore followed up with her own break up statement.

The pair had appeared like a united front on The Tamron Hall Show as they sat alongside Brooklyn Doris Daly, with Moore calling Daly “the love of my life” as he recounted how he supported her through her long IVF process.

In regards to their sudden split, Kenya Moore claims

AllAboutTheTEA.com was first to spill the tea about Marc Daly’s secret life and cheating with another woman.

Kenya Moore claims all the cheating rumors are all false.

“I can tell you I’ve heard a lot of rumors about secret families. I can tell you that’s completely made up; there’s zero truth to that,” she says. “In terms of infidelity, I’ve had no proof of that. That’s not our issue.”

She maintains that their issues stem from the struggles of a long distance relationship. Marc Daly lives and works in New York City — while Kenya Moore is raising their baby alone in Atlanta, Georgia.

“The distance had really been taking a toll on us,” says Moore. “Initially when we had the baby, it was great. He was there for every single doctor’s appointment, every ultrasound, every scare, we were 90 percent together. He was a very supportive husband during that time.”
After Brooklyn’s birth, though, that became harder.

“Marc opened up two new businesses and is opening up another,” Moore explains. “It was frustrating for me that he kept opening businesses in New York, but listen — I want him to be successful and that’s how he feeds his family. So I couldn’t be selfish. But if you’re living in two different places, you have to be together during the times you are in the same place; either you’re both in NY and you’re both in Atlanta. And when we’d be in the same place, we weren’t always in the same place. So with the businesses, the distance, and the baby, it just became hard for us to figure it all out.”
Asked why they didn’t just move, Moore says they “each liked where we lived and wanted to split our time.”

“A lot of couples do and they do it successfully,” Moore says. “New York and Atlanta, it gave us a full life. There’s no other city like New York in the world; I loved our life there. And Marc, he loves Atlanta. He has his own friends here, and it’s a family environment where there’s a home and a yard for kids to play, without the daily anxiety of living in a big city. It was the best of both worlds.”

“We communicate in very different ways,” Moore reveals. “I’m seen as tough on the show because I take up for myself … [but] in my relationships at home, I am the opposite. I’m not a fighter. I don’t want to fight at home. I want to be able to talk; I want to be able to rationally discuss things. And I get to the point where, I’ll withdraw if it seems too combative or not healthy.”

“If the communication were better and more open and honest, I think we could solve our problems,” Moore continues.
She went on to tell PEOPLE that she pushed Daly to go to counseling, but that he hasn’t agreed.
That’s something that still leaves Moore frustrated.

“Counseling could be a big proponent in flushing out issues a couple may have. Then after a considerable amount of time and effort, you can make the decision whether you can come to a common ground and you can still work on the relationship or not. And I never got that opportunity,” Moore says. “I’m not saying that opportunity may not exist in the future. But I just don’t have a complete sense of if that’s something that he’s still willing to do.”

According to Kenya Moore, Marc has not seen her since he quit the relationship but he’s supposedly seen his daughter. She claims things are “pretty civil” following their split.

“He had a great time with her,” Moore says. “And he FaceTimes her every day. He’s a great dad to her.”And that’s the most important thing to Moore.

“I’ll always want Marc to be in Brooklyn’s life,” she says. “Brooklyn is a special girl. She’s vibrant and just makes people happy. Having her is a blessing. Look, all this, it’s definitely tough because when I’m with her, I think about what I thought was my fairytale happy ending. I thought Marc was my forever love — that I had met this handsome, smart, funny, successful man who was single and who fell for me as fast as I fell for him and who would be there by my side forever. I thought this was the one and that with Brooklyn, I finally got the family that I wanted. I just don’t know what to say about all that now.”

The Real Housewives of Atlanta season 12 will premiere in November 3, on Bravo at 8:00 pm ET.