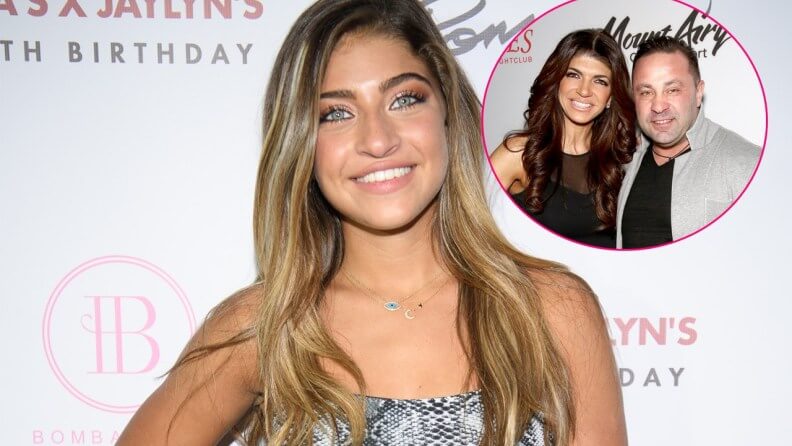 When season 10 of The Real Housewives of New Jersey premieres in a few weeks, Joe Giudice’s crumbling marriage to Teresa Giudice will be front and center amid his deportation battle.

The explosive season 10 trailer revealed a heated phone call between Teresa Giudice and her imprisoned husband, Joe Giudice. During the call, they argue and Joe says that he never wanted to marry the Real Housewives of New Jersey star.

“Alright, like I even wanted to get married? No,” he says. Teresa then turns to her daughter, Gia, 18, and says. “See what I get?”

Press play to watch the full trailer below.

According to a report by PEOPLE, Gia has been her mother and sisters main emotional support system throughout her father’s deportation ordeal.

“Gia has been a rock for her family during these tough times,” a source close to the Giudice family tells PEOPLE of the 18-year-old.

“She’s very mature for her age,” the insider continues, adding that sisters Gabriella, 15, Milania, 14, and Audriana, 10, “really look up to her.”

“With the whole Joe situation, she stays strong for them, while still fighting for her dad,” says the source. “Even now that she’s away for college [at Rutgers University], the girls are all still very close. She’s set a great example for them. She’s the real star.”

Real Housewives of New Jersey fans will see the mother/daughter duo engaged in many heated exchanges in season 10.

“They have been butting heads, as all mothers and daughters often do,” explains the source. “Gia tries to stay out of whatever disagreements her parents are having.”

“She’s used to seeing rumors spread about her mom, and it’s never easy for her, but she does her best to ignore them for the sake of her family,” the source continues. “She doesn’t care what her mom does; she just wants her father home in the long run and will always have a close relationship with him.”

The dad of four has been away from Teresa and their four kids — Gia,18, Gabriella, 15, Milania, 14, and Audriana, 10 — since he began serving his 41-month sentence for mail, wire and bankruptcy fraud in March 2016.

He was ordered removed by an immigration judge on October 10, 2018. He filed an appeal to the decision but was denied on April 11, 2019, by the Executive Office of Immigration — which holds as the highest level crime in the U.S.

A source previously told PEOPLE that Joe Giudice is losing “hope” that he’ll ever return home to be reunited with his family. The conditions he’s been living in under ICE’s custody have also taken an emotional toll on him, according to the family insider.“ These past few months in ICE [custody] have been harder for Joe than prison was. The conditions there are terrible,” the source said.

“He’s so close to freedom, yet so far away. Not being able to see his family, and knowing that he won’t be able to be back home with them, has really broken him.”

“He’s fighting, but he’s really resigned to the fact that he’ll be deported,” the source continued. “And losing that hope has left him bitter, angry, and unhappy. He’s a shell of who he used to be.”

As fans know, Teresa has already moved on from Joe Giudice and announced her plans to divorce her husband once he’s deported. But according to a family source, “Teresa and Joe have had their arguments in the past few months, but Teresa doesn’t want Joe to get deported,” the source told PEOPLE. “She wants him to come home for their family. She loves Joe and it hurts her to see how he is being treated.”