After Bravo dropped the explosive Real Housewives of Beverly Hills Season 9 reunion trailer on Tuesday — Lisa Vanderpump  responded to Kyle Richards’ claim that she faked the lie detector test results that proved her innocence in the #PuppyGate saga.

The British restauranteur took to Twitter to deny the allegations when responding to a fan, “Gosh no….just one guy, who said he worked with police force,” she wrote on July 9. 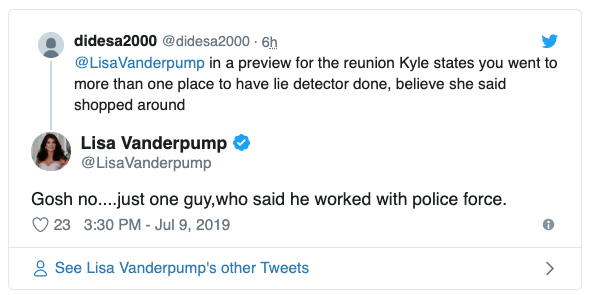 As fans know, #PuppyGate is the scandal that plagued the current season and when the topic came up on the reunion —  Kyle Richards accused Vanderpump of manipulating the lie detector test results that proved her innocence.

“I want to know where she found the lie detector,” says Denise Richards.

“She did a test run first,” adds Kyle, which evokes audible gasps from the group.

As fans know, Lisa Vanderpump did not attend the season 9 reunion but was certainly a major source of fodder for the ladies. Part one of the reunion will center around the women dragging Vanderpump for not attending the reunion.