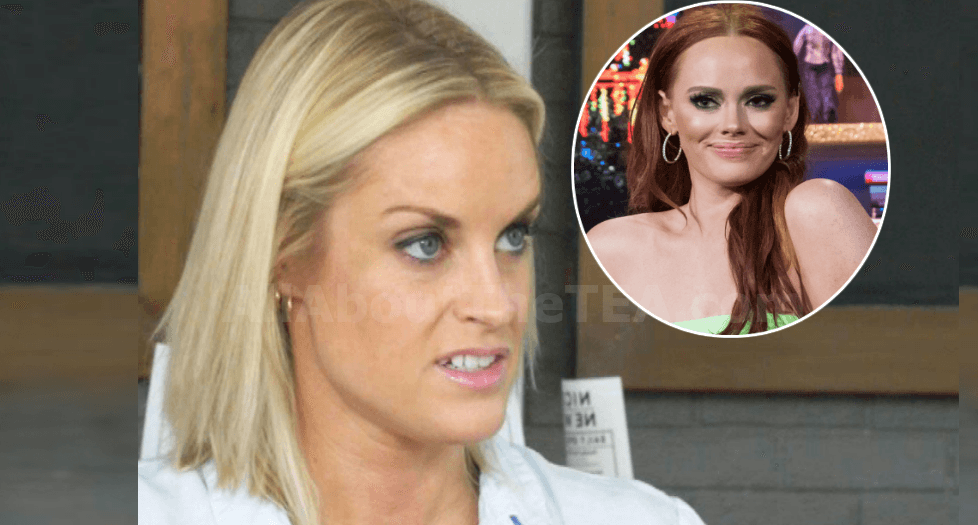 We start this week’s episode of Southern Charm with Patricia Altschul. She’s tired of her son, Whitley Sudler-Smith, populating the kitchen with his hippy dippy vegan, gluten-free food. A southern woman needs some red meat once in a while. So naturally, Patricia has her butler, Michael, take her to McDonald’s, as all genteel women do. Rolling up to the drive-thru in a Bentley, Michael orders a cheeseburger with no tomato. Um, Michael, babe, this is not the place for fresh vegetables. But Michael clarifies that ketchup is a tomato-based condiment and will never touch the tongue of our doyen, Patty.

To make matters more ridiculous, Michael pulls over, extracts a bottle of wine from the trunk of the car, and pours Patricia a crystal glass of vino. She uses a china plate for her ketchup-less burger. She shuns the paper napkin, courtesy of McDonald’s, and tells us her three vices are Taco Bell tacos, Costco hotdogs, and the occasional cheeseburger — sans ketch, of course. Finally, Patricia and I have something in common.

We hop over to Shep Rose’s house where Cameran Eubanks brings him tacos from the dollar menu. (This episode is brought to you by the Council for Fast Food — Charleston Division.) Shep is trying to sell his beach house — the one he bought last season. He wants to buy another beach house, or maybe build one. Cameran urges caution, but Shep thinks Cameran is too conservative. 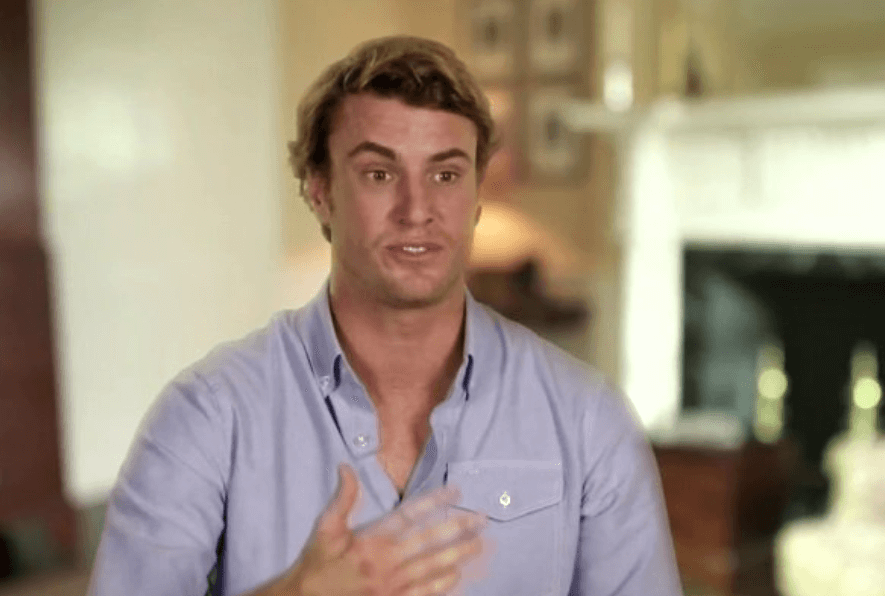 Shep tells about the previous night where Kathryn Dennis iced out Danni Baird and Chelsea Meissner. Cameran says Kathryn is quick to throw friends under the bus. Shep says she sabotages relationships. Danni has been Kathryn’s biggest supporter, and now Kathryn’s dumping all over her one true friend.

Over at Kathryn’s very expensive rental, she unpacks the good china and the real silver. She has memories of her grandmother’s gift of southern hospitality over the years, and while none of that rubbed off on Kathryn, she can set a nice table. And order takeout which she tries to pass off as her own home cooking.

Her new beau, the disgraced state senator, Joe, arrives with flowers. She tells us she wasn’t at first attracted to Joe, but as they spoke, she found they had a lot in common. When he offers to help her cut the flower stems and pulls out her chair at the table, Kathryn is awed by his manners —  and implies that baby daddy, Thomas Ravenel, never acted so gentlemanly. She fesses up to the fact that she didn’t cook dinner. Joe doesn’t need to know all her secrets. He encourages her to keep some of those to herself. 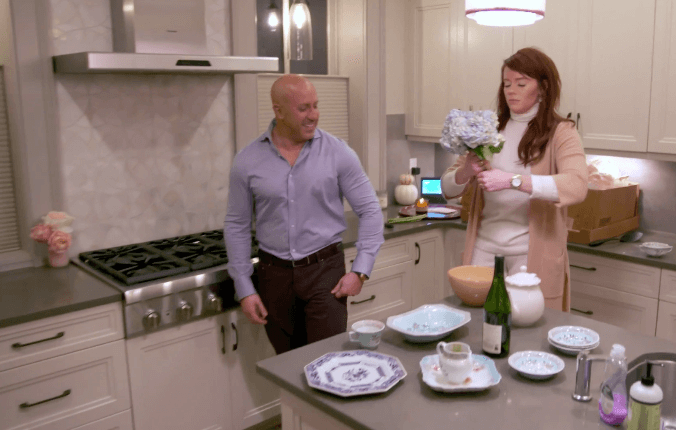 Shep, Craig Conover, and Austen Kroll head over to a manly, outdoor store. They’re planning a guys’ trip in an RV to the Smokey Mountains. Considering how freaked out they get over seeing a real cat in the store, I’m not sure this is a good idea.

Shopping for supplies, Austen says it’s been a hard few weeks post breakup. He’s been missing Madison, but now he’s finally ready for some dude bro time. He gets a phone call from his original brewer. Because it’s so expensive to make, he can only get his hands on three cases of his own beer for the trip.

The men talk about Kathryn’s attitude. Shep apologized for calling her names. Meanwhile, the men are still stunned that Madison shared Austen’s texts with Chelsea. Austen was shit talking his old girlfriend (Chelsea) to Madison. Chelsea made her feelings known at Craig’s party.

Now, Chelsea heads over to Madison’s salon. Madison is working six days a week, and never has time off. Chelsea offers to go into a partnership with Madison, who remains hesitant. Everything she owns is invested in her business, but she’s open to crunching numbers with Chelsea. 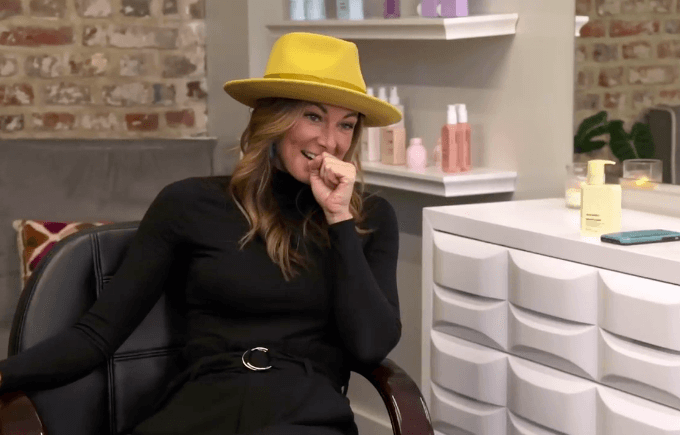 Madison moans over Austen’s lost potential. And she’s tired of having her good name trashed by the likes of Craig and Shep. Shep called Madison a white trash hair stylist. Excuse me, mister. Madison spent her childhood in the country club, thank you. She slams him for being a trust fund brat. Chelsea is tired of his snooty attitude. 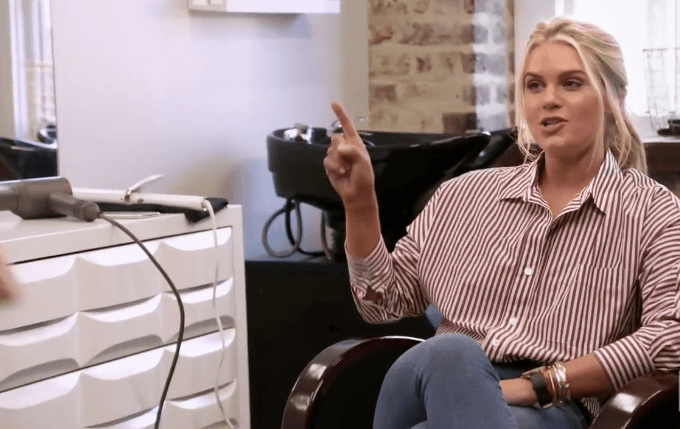 Across town, the guys pack for their trip, and Craig brings along his fur robe. Nate, the RV driver, shows up. Michael the Butler drops off Whitney, like he’s ten and going to camp for the first time. Austen shows up with beer and tries to hand out warm cans of the stuff. Shep has injured his ACL in a mechanical bull riding accident. He’s having a hard time remembering he’s a grown, middle-aged man and not a teenager.

Whitney fondly remembers his time on the road with various bands. He played guitar, but he reminds us he’s classically trained, even though he likens himself to Justin Bieber. Uh huh.

As always, the boys quickly get into the gossip. Shep brings up Kathryn’s behavior during Craig’s party. Shep takes Danni’s side, saying Kathryn should listen to her good friend, while Austen thinks Kathryn has the right to not discuss their previous argument. Shep says that Kathryn iced out Danni, and it was a slap in the face. But Craig points out that the men do it to each other all the time, and they’re fine with it. Side note here. I’ve always known Shep was a misogynist manchild, but his view of Madison and Kathryn this season is really starting to grate on my nerves. Shep says girls are more sensitive and can easily hurt each other’s feelings. He’s not wrong, but placing all the blame for Austen’s failed relationship on Madison is wrong.

We catch up with Eliza Limehouse, of the Limehouse Bridge Limehouses. Naomie Olindo and Danni head out to the Limehouse farm to go horseback riding. They were turned off by her behavior at Patricia’s party a few weeks ago, where Eliza badgered Kathryn and spoke highly of Thomas. But now that the girls are tired of Kathryn’s bad attitude, they’re willing to give Eliza another chance. 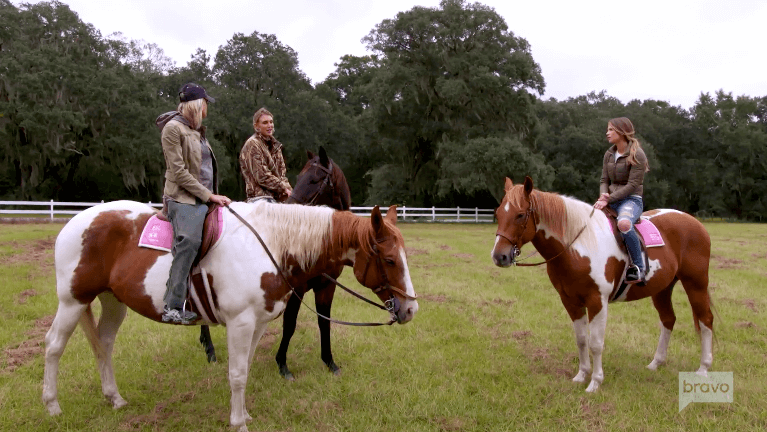 Eliza again reminds us that she was supposed to be on a plane bound to the Bahamas. That plane crashed, killing all aboard. Eliza is still reeling from her close call. And she blames her parents and their public divorce for the backlash she received at Patricia’s party. She thinks everything she does or says is under a microscope because of her embarrassing family situation. Naomie says Eliza was overcompensating for her nervousness that night. 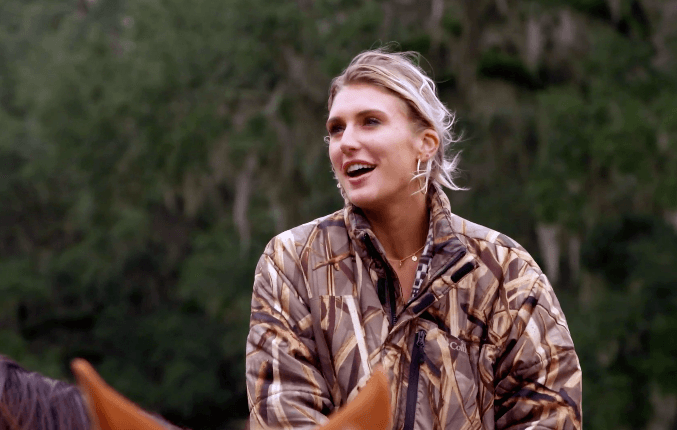 Danni says Kathryn’s attitude isn’t personal. The girl doesn’t trust anyone. Even so, Danni sent the redhead a text, saying Kathryn spit on their friendship. She’s tired of being a doormat, and thinks Kathryn owes her an apology. Eliza says that Kathryn’s personality changed after she hooked up with Thomas. Eliza sees a lot of similarities between her dad and T-Rav. These men are the center of attention, sucking up all the oxygen in the room. The women in their lives feel pushed to the side.

Back in the RV, the men sample Austen’s beer and approve of the formula. But all the booze, sweat, and farts are stinking up the joint. Then Whitney gets stuck in the bathroom and doesn’t know how to flush the toilet. Um… Maybe he really is going away to camp for the first time? 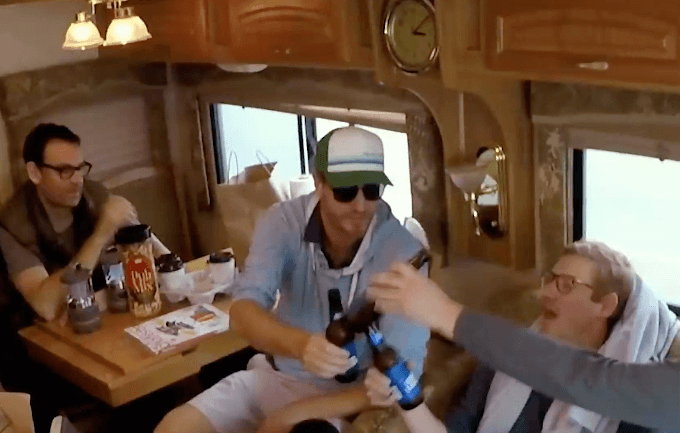 Talk turns back to Madison. Craig thinks Austen’s relationship was built on a foundation of infidelity. Austen disagrees, but has managed to stay away from Mads. For now, at least. The men are horrified that Austen is leaving the door open for ex sex.

She’s been busy packing up baby clothes Palmer has outgrown. As much as she hates the baby phase, she misses it, too. And she even smells Palmer’s old clothes in secret.

Tired of being at home with the baby, Cam is interviewing nannies. A grandmotherly type shows up and Cam asks her a million questions, including if she believes in astrology and what would happen if the baby climbed inside the chimney. The woman tries to put Cameran’s mind to rest, saying she’ll get baby Palmer a helmet for riding in the car. 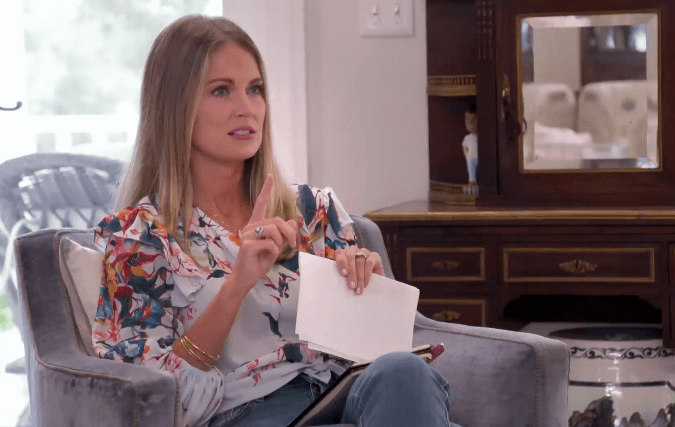 The guys finally arrive at the campsite by running into a tree branch. The eight-hour trip has taken its toll. The men can’t even get out of the RV and need the help of Nate to open the door. Next to a rushing river, the men set up camp in the dark. Craig starts the fire, then decides he and Austen will forage for more wood, while Whitney and Shep hang out at camp.

Shep complains that Craig got the fire wrong, and Whitney sits in his camp chair, criticizing the other men. Craig’s had enough, and tells Whitney to shut his pie hole. Whitney whines about wanting beans and corn. He doesn’t want any dairy or casein in his food, damn it!

Shep tosses the burgers on the grill, causing Craig to meltdown. Let him cook, dude bros. He knows what he’s doing, not Shep. The men drag Craig and his culinary skills. Whitney and Shep almost have seizures when Craig uses too much salt to season the meat. Finally, Craig tells Whitney to shut his fucking mouth. The other men gasp in shock. 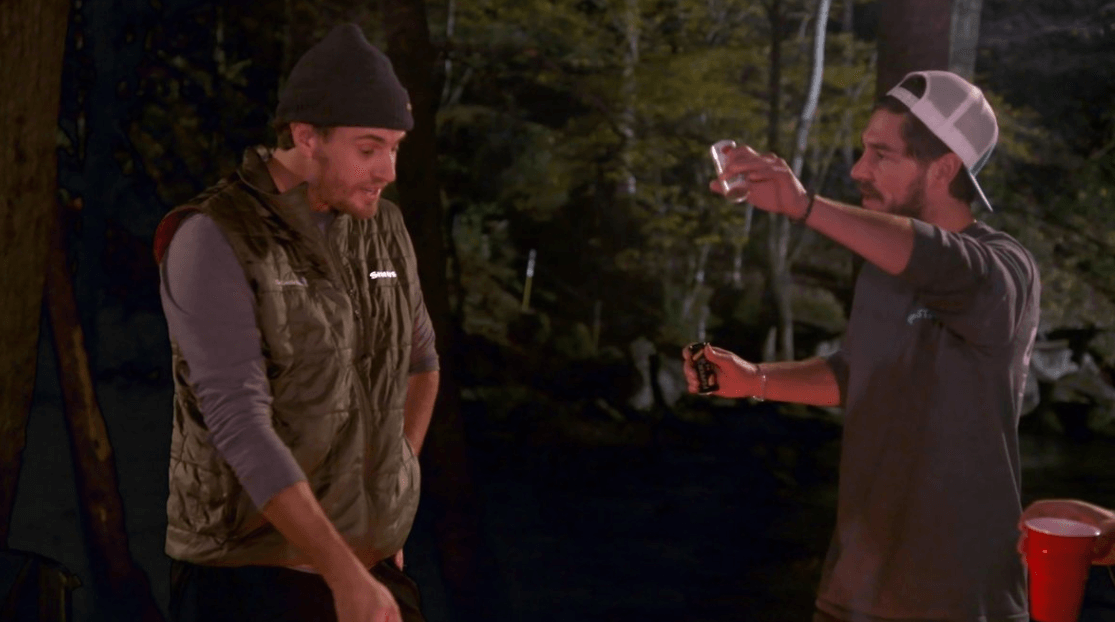 They try to apologize, but Craig is tired of their running commentary. Shep compares Craig to his little brother, and admits he’s a dick to Craig. Finally, Austen tells the guys to lay off. Even he’s had enough of their jibes.

When Craig lobs a weenie at Whitney, Whitney throws it back. And then it’s game on. Craig retaliates by tossing a paper plate. The men are shocked that Craig is feeling some kind of way. Be nice, Craig. Jeez! They were only joking. Shep says men bust each other’s chops. Get used to it. Tired of their goading, Craig heads into the RV to go to bed. To hell with the burgers. Let ’em burn! 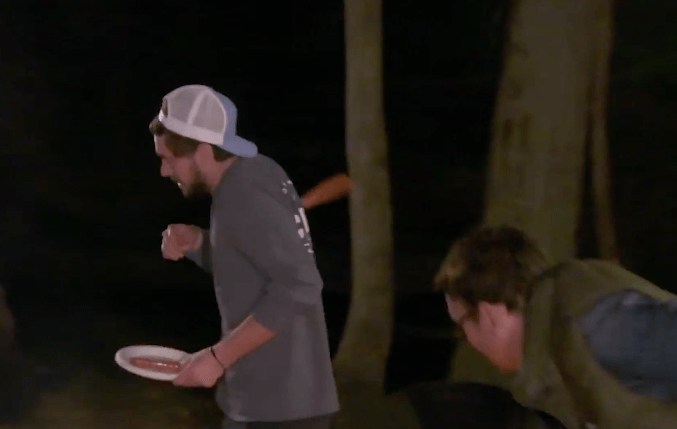 And so ends our episode. So, do you think Craig acted like a baby or was Shep an asshat? And was Danni right to send Kathryn the text?