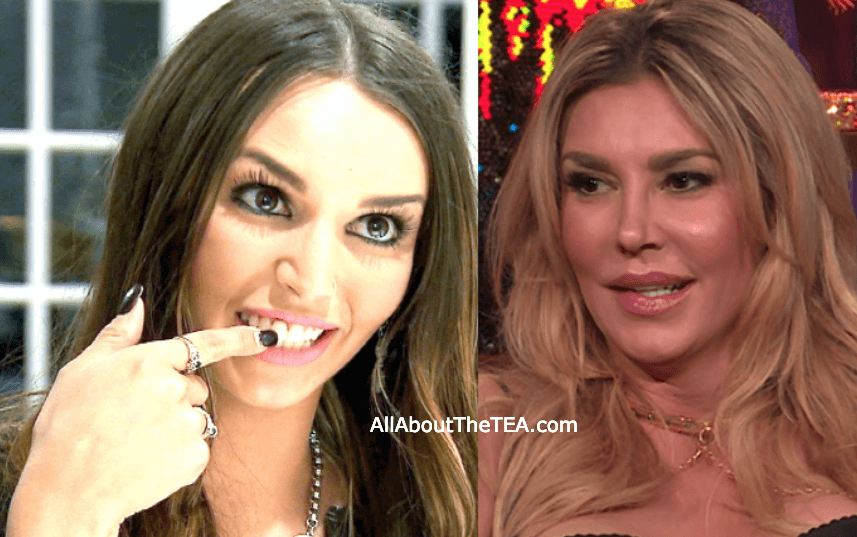 “I don’t hang out with Scheena but we are fine,” Brandi tweeted at Andy Monday during his show. “However if she has no issue with lvp why does she constantly need her podcast producer (mine also!) to edit all the shit she talks about LVP ??”

I don’t hang out with Scheena but we are fine however if she has no issue with lvp why does she constantly need her podcast producer (mine also!) to edit all the shit she talks about LVP ??

Host, Andy Cohen, read the tweet to Scheana, who was shocked by Brandi’s attack since the two had patched things up after their own drama.

“I don’t talk any shit about Lisa on my podcast,” she maintained. “There was I think a comment between Teddi [Mellencamp] and I that it was behind-the-scenes stuff, like fourth-wall breaking, that I was like, ‘We should just keep that out.'”

During a recent appearance on Scheana Marie’s podcast show, Scheananigans — Teddi Mellencamp dished about the current status of her friendship with Lisa Vanderpump following a very dramatic season.

“I haven’t spoken to her in quite some time,” Teddi said at the time. “And I think, without giving too much away, each one of the women has a different relationship with Lisa Vanderpump. And I am somebody that definitely can coexist in a situation. I’m not one of those people that’s like, ‘Oh, because I’m not getting along with them, you can’t either.’ I really don’t care. For me, it’s about my own relationships.”

As fans know, Dorit Kemsley adopted a dog from Lisa Vanderpump’s rescue center, then later claimed the dog (Lucy Apple Juice) was abusive towards her kids and husband — and subsequently gave the pup away to an unidentified woman.Vanderpump’s partner in her dog rescue business, John Sessa spoke out — exposing Dorit as the person who actually took the dog to the kill shelter. However, Teddi, Dorit, Lisa Rinna, Kyle Richards all pointed fingers at Lisa Vanderpump for exposing the dog drama to the press.

Brandi Glanville recently spoke on the Vanderpump dog drama and she’s happy that the restaurateur is being singled out as the villain.

“It’s so crazy, and I’m so happy this is finally happening,” Brandi said last week on her Unfiltered podcast show.

She continued, “Lisa Vanderpump is a manipulative person, and when I was on the show, I did a lot of her dirty work for her,” Brandi said last week. “I finally realized it, and I started calling her on her shit. And I had no backup — zero — and that got me no job.”

“I was let go, but I was told, ‘You’ll always be a Housewife,’ and, ‘We want you back part time,’ and, ‘Make appearances,’ and all that, but I was let go, yes,” she added, before teasing she’ll pop up again on the show around mid-March.