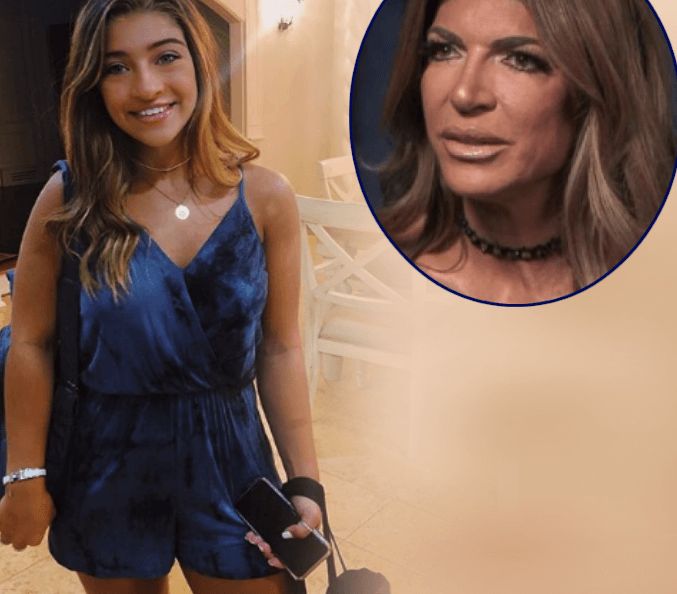 Teresa Giudice is getting mom-shamed again — this time for letting her daughter wear a risqué romper on her first day of 12th grade.

On Tuesday, The Real Housewives of New Jersey star Instagrammed back-to-school photos of her daughters — but the one of her 17-year-old, Gia Giudice, got many of her followers riled up. “last first day of high school.” In the photo, the high school senior is wearing a blue tie-dyed romper. “I’m so excited for you, starting your senior year! I remember your first day of kindergarten like it was yesterday, enjoy every moment this year!” Giudice captioned the photo.

My gorgeous, gracious amazing Gia! I’m so excited for you, starting your senior year! I remember your first day of kindergarten like it was yesterday, enjoy every moment this year! I love you so much!! #mysenior #lastfirstdayofhighschool #myfirstborn #gia #firstdayofschool

Immediately, the mom of four’s followers weighed in — many expressing Gia’s outfit is inappropriate for school.

One fan commented that the 17-year-old’s romper was too revealing.

Another pointed out that Gia’s romper could trigger adolescent boys with raging hormones to become overtly sexual.

“No one is sayin that she doesn’t look good. They are saying it isn’t appropriate for school. Look, guys hormone are raging enough in high school without wearing clothes with spaghetti straps or shorts that show so much leg. Gia is a beautiful young lady and a lot of us think that this outfit isn’t school appropriate.”

My 7th grader….Milania I hope you have the best school year! You’re so amazing & this is your year to shine! #firstdayofschool #7thgrade #mymilania

Many critics deemed the ensemble party wear — not suitable for school.

“Wow public schools let you dress in shorts with flimsy material like that? Yes she’s beautiful and yes 90 degrees plus down South but that party outfit wouldn’t pass the bar and shouldn’t!!”

“Not dressed appropriately for school.”

“She looks like she belongs at an adult slumber party. Why would you let your teenager go to school like that?! Hopefully she ends up being smarter than you and Joe!”

I can’t believe my baby Audriana is going into the 4th grade!! I’m so proud of her, she’s kind, supportive of her friends and dedicated to her school work and dance! Happy 1st day! #backtoschool #1stday #mybaby

An educator pointed out that Gia’s outfit would violate dress code at her school.

“I teach at a public high school and this rompers is against ALL of our dress codes. Shame on publicity hungry Teresa Guidice.”

“That outfit wouldn’t be allowed in my school district.” Another fan echoed the same sentiment.

Controversy follows the felon mom, who was convicted of multiple fraud charges in 2014 and served an 11-month prison sentence.

As fans know, last month, Giudice was blasted for permitting her 9-year-old daughter to wear makeup, while vacationing in the Bahamas.

Also, back in January, she took her then 12-year-old daughter Milania, to a 6ix9ine concert and fans reacted harshly. The controversial rapper, 6ix9ine, has been accused of a horrific sexual crime against a minor, that he has admitted to in court.

Share your thoughts on Teresa Giudice allowing 17-year-old daughter, Gia Giudice, to wear a romper to school. Sound off in the comments!