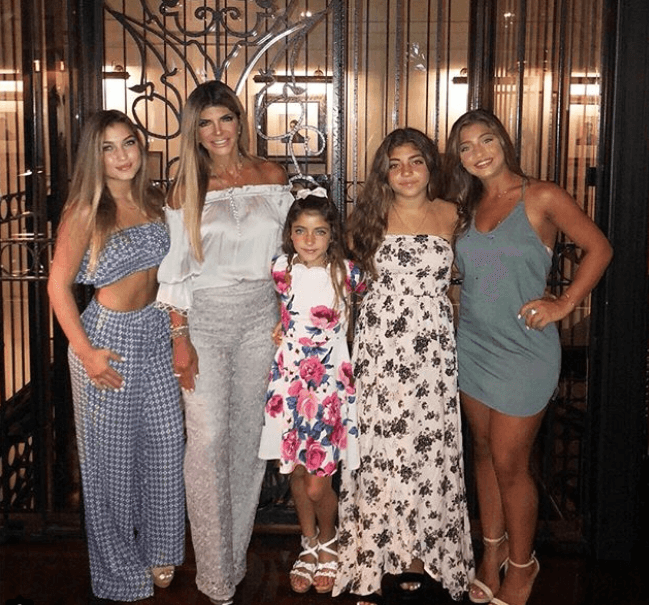 The Real Housewives of New Jersey star was mom-shamed for permitting her 9-year-old daughter to wear makeup, while vacationing in the Bahamas. On Monday, Giudice posted the following photo of her three daughters Audriana, 9, Gia, 17 and Milania, 13, on Instagram.

Giudice’s photo sparked outrage in the comment section of the IG post — one concerned observer responded with: ‘That’s not age-appropriate’

“Are you f***ing kidding me with the makeup and clothes these little girls have on!!” another furious commenter wrote.

“Where is the parental control here!!” While another said.

“Scary that these girls are dressed like grown adult women.”

“Beautiful girls, but no need for makeup or an unbuttoned shirt. That’s not age-appropriate.”

“Wow….bra showing…wtf….these girls are going to turn into pure trash if this continues”

Giudice’s husband, Joe, is currently serving a 3-year prison sentence for tax evasion, conspiracy and bankruptcy fraud, then will be deported to his native Italy.

Despite the negative backlash, the mother of four continues to flaunt her minor daughter’s grown-up looks on social media.

Having the best time with my girls in Paradise in the Bahamas ? #family #daughters #dinnerdates @vigi_miami_boutique

This is not Giudice’s first time being called out over bad parenting. Back in January, she took her then 12-year-old daughter Milania, to a 6ix9ine concert and fans reacted harshly. The controversial rapper, 6ix9ine, has been accused of a horrific sexual crime against a minor, that he has admitted to in court.

Do you agree or disagree with spectators mom-shaming Teresa Giudice? Sound off in the comments!