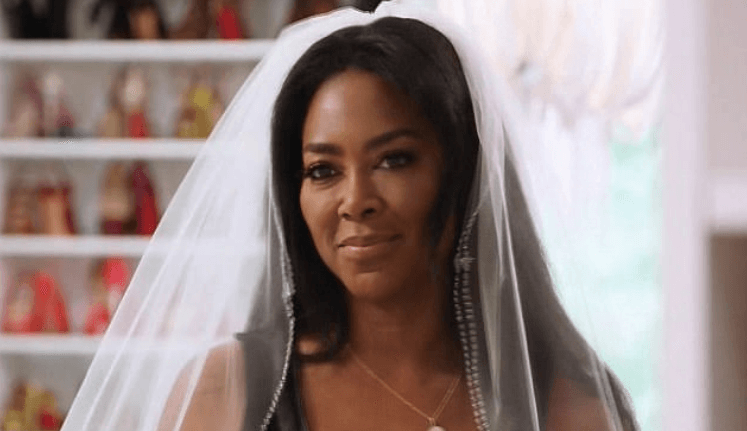 As reported, Kenya Moore’s peach was revoked as a full-time Housewife on The Real Housewives of Atlanta.

Our friends over at Radar Online are shedding more light on the 47 year-old reality star’s dismissal from the hit Bravo reality series.

“Shooting starts in two weeks,” an insider revealed to Radar, “and Kenya will not hold a peach!”

“A final decision hasn’t been made on Kenya, but she is definitely not a full-time housewife,” the insider told Radar.

The former beauty queen’s demotion stems from Moore’s mystery elopement in June 2017 to Marc Daly. The wedding stunt caused major headaches for RHOA producers because Moore did not cooperate with production’s various attempts to build a post-married storyline. As reported, the 46-year-old’s reluctance to build a post-married storyline has costed her $125,000 in RHOA penalties. And despite allegations of a fake marriage, Moore has yet to furnish a marriage certificate to prove she’s actually married.

Then in a last-ditch effort to save her lucrative million dollar job, Moore announced that she was expecting during the Season 10 reunion, however, her baby news failed to secure her spot on the highest rated show in the franchise.

“Execs aren’t even sure if Kenya will be a ‘friend’ on the show,” the source snitched about Moore’s future with the show. “She’s been fired as a fulltime housewife. She just hasn’t delivered anything that people want to watch. So she’s out.”

As reported, Moore’s husband was approached by RHOA producers to film one scene with his wife — he agreed for an outrageous fee of $25,000. Kenya’s husband’s absurd cash demand was rejected by producers, partly because the reality diva has not proven her marriage is legal.

As AllAboutTheTea.com readers know, this isn’t Kenya’s first lie — the RHOA star has a history of faking relationships, and her history of telling tall tales has finally landed her on the unemployment line. Producers want storylines rooted in truth and have replaced Moore with newcomer Eva Marcille, who is getting married to her fiancé, Michael Sterling and a new woman is expected to join the cast.

“Eva’s wedding is a better story.”

Season 11 will start filming the second week in June, and NeNe Leakes, Porsha Williams, Cynthia Bailey and Kandi Burruss will all return for another season without Moore and Sheree Whitfield.

Do you want Kenya Moore on The Real Housewives of Atlanta as a “friend of ” or a full-time Housewife? Sound off in the comments!

Comments
#RHONY Star Ramona Singer Was Involved in a Car Accident in the Hamptons!
#RHONJ Imprisoned Joe Giudice Abandoned By Teresa On His Birthday Amid Marriage Trouble!
To Top