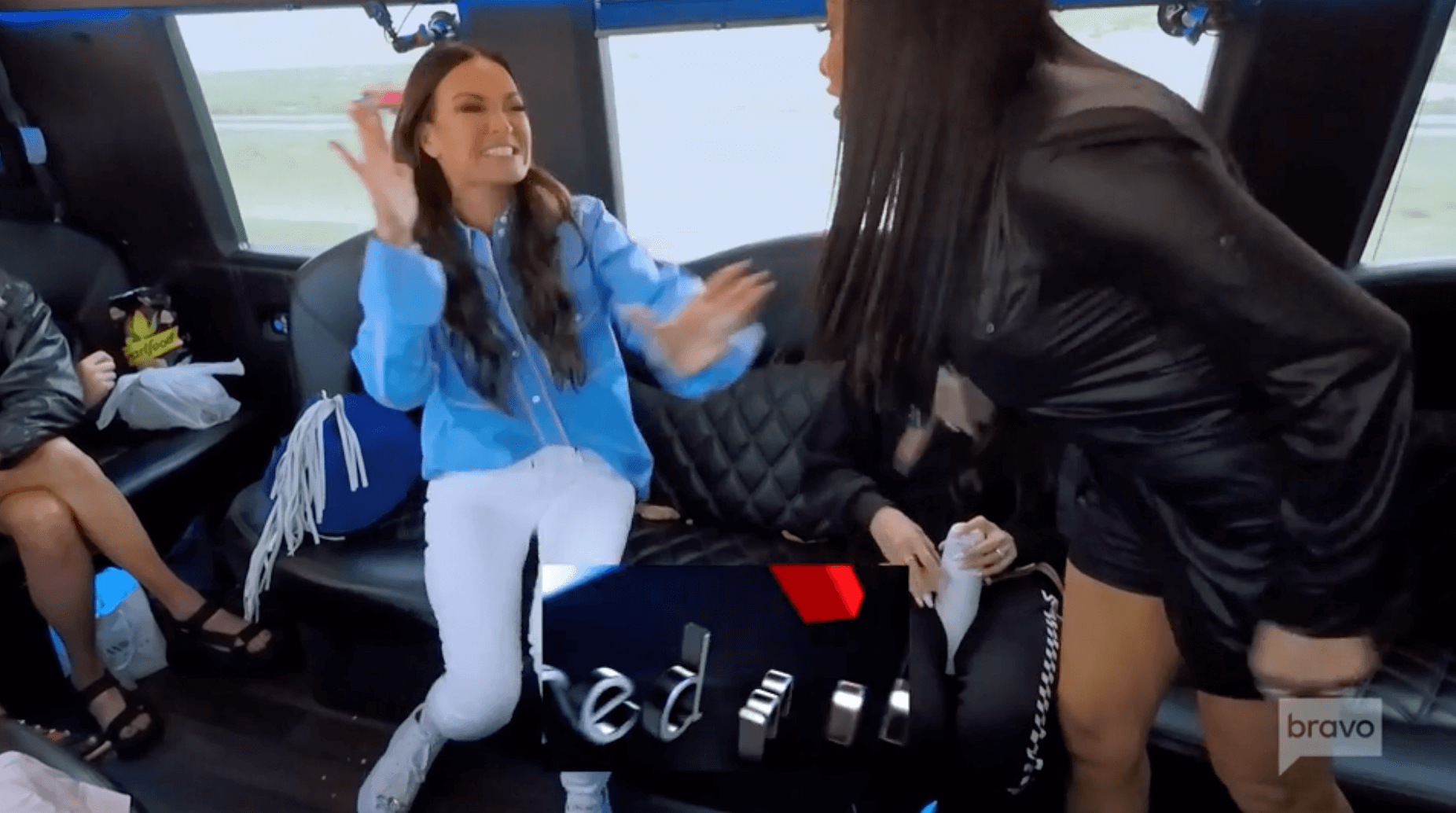 This week The Real Housewives of Salt Lake City starts with Jennie Nguyen’s daughter wanting to make breakfast but afraid of burning down the house, mentioning a prior paper towel fire. Meredith Marks is searching for a venue for Seth Marks’ birthday party. And Big Joe, Mary Cosby’s cousin, is working on her home renovation, but isn’t allowed to mess with “Big Momma’s dishes.” The husbands, Justin Rose, Seth, Duy Nguyen, and John Barlow meet to play golf. YES! The men are working on their plan for Mother’s Day. Their thought is that the losing cart in the golf game pays to send women off for a trip. Win-win. They want their women to quit fighting so that they can spend more time together. Seth is excited to see everyone at his birthday party. He tells the men to bring cleavage to the party.

Heather Gay and Jen Shah meet for a spa day rather than, according to Heather, do the traditional Mormon thing—make a casserole. Jen is wearing her very plain Ramadan wig again. They talk about all the drama. Heather was surprised that Meredith defended Jen but then didn’t send Jen an invite to Seth’s party. Jen thought she and Meredith had worked everything out until the “accusations and allegations.” Jen thinks she’s now the easy scapegoat.

Jen can’t figure out why Mary isn’t called out for bad behavior and also why Meredith and Mary are friends. Heather tells Jen what Mary said to Lisa Barlow in Vail, “See what happens when you mess with my church. You go to jail.” Heather asks if Mary could have had anything to do with Jen going to jail. Heather and Jen can’t figure out how law enforcement knew that Jen was at Beauty Lab on the day of her arrest. Heather seems to think that Mary and Meredith know more than any of the rest of them.

Seth seems excited about his party. His family and friends are there. As the ladies arrive at Seth’s party, Heather is still confused about how Lisa and Meredith greet each other as sappy fake friends after their last interaction. She can’t figure out the hot/cold relationship. Meanwhile, Mary is standing alone, ignoring Jennie and Duy, and then looks around for someone to talk to instead of Jennie.

Meredith pulls Mary aside to talk through the problems with Jennie. And Mary thinks that the problem is that Meredith’s and Lisa’s relationship is strained. Mary says, “Lisa is all about Lisa.” Flashback to Lisa taking digs at Meredith. Then flash to Meredith’s dog, Teddy, having a great time. As the Housewives sing Happy Birthday to Seth. Duy makes a special announcement since he and John lost the golf game and are paying, the men are sending the women on a trip to a villa at Zion. As the women are happy and thankful, Jennie asks, “Are we inviting Jen?” Duy seems a little speechless and says Coach Sharrieff Shah Sr. is one of their guys, so yes. Cue the angst.

Coach and Jen are painting together as their homework for couples’ therapy. Coach doesn’t remember the therapist telling them to paint, just to “express.” But Jen is always extra. Jen has been house hunting—seeing some rather underwhelming (in her opinion) options. Coach tells Jen that the group of ladies is going to Zion on a trip. Jen’s wondering if she’s invited. Coach reassures her that she’s invited.

As the party winds down, Whitney Rose brings Seth a boob cake. Seth has a weird obsession with Whitney’s breasts, even asking Meredith to get the “Whitney augmentation.” Whitney presents the cake to give Seth “a mouthful.” Seth is very excited about the cake.

Heather and Whitney ask Meredith why she didn’t invite Jen to the party. Whitney asks, “Is there more to the story?” Meredith dons her sunglasses and says, “Of course there is.” Whitney thinks Meredith is dodging the question. Meanwhile, Seth is lit and jumps in the pool. Then Whitney jumps in, then Meredith is in. As they move to the hot tub, more people join in. Seth says, “This is the best birthday I have had in my life since I was in the balls at McDonald’s!”

Three days later, everyone is packing as the ladies plan to head to Zion. Another bus trip, whoa boy. Jen is actually packing her own bags. Shock. As they all gather at the van, Kevin the Driver is there again… flashback to the trip to Vail. Same bus, same driver, same seats. Lisa and her humongous diet coke arrive. Once again, Mary and Meredith are not on the bus.

Jen thinks Mary and Meredith aren’t there because she’s there. Jen found out that Meredith hired a private investigator, so Jen is going off about it. She’s directing her anger at Lisa. Jen is trying to hold Lisa accountable for Meredith. Jen is hot about why everyone believes Meredith, but not her. Lisa says she calls out what she sees as “right or wrong.” Then Jen blurts out, “She had an affair. That’s not my fault.” Whoa. Maybe it was common knowledge in this group, but no one seems shocked.

Jen tells Lisa that she needs to choose. “You sign up or you don’t sign up.” Jen keeps going, telling the group that Meredith is playing them, and they are weak AF. It’s hard to tell how long this rant went on. Lisa feels like, with Jen, is that it’s never enough. As Jen’s rants go on and on, Jennie moves further and further away from Lisa. Jen’s talons are out. Jen stands up telling Lisa to STFU. Then Lisa has a meltdown, and Jen gets in her face. Someone from production pulls on Jen, trying to pull her back from Lisa. Poor Kevin just keeps on driving. Next week, do they make it to Zion? This can’t be the healing trip that the men envisioned.