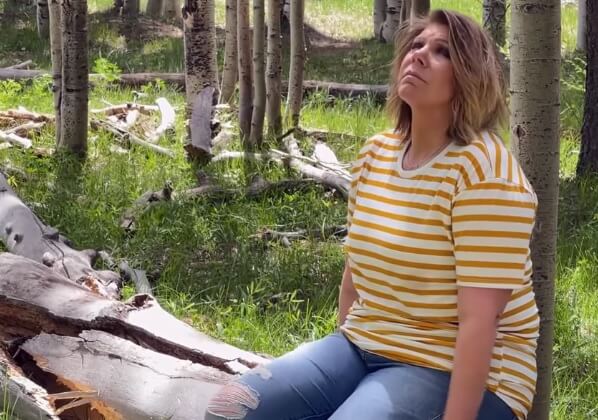 This week on Sister Wives, the Browns spend Thanksgiving (2021) scattered after that awful Covid-rules meeting and second gathering to try to sort out the holidays. Janelle Brown celebrates with Garrison, Gabriel, and Savanah Brown. Christine Brown celebrates in Utah. And Kody Brown, Meri Brown, and Robyn Brown celebrate with Robyn’s children. As smaller family groups gather for Thanksgiving, Kody is seeing it as a loyalty test and purposely dividing the family.

Meri and Robyn sit down, to hash out their misunderstanding from the last interaction. Robyn says one of the other mom’s kids called her to ask HER about the rules instead of their father. Robyn sees now that Meri was poking fun to draw attention to the common belief that Robyn is in charge rather than believing it to be true. Right away, Meri jumps in to call bullsh*t on why she hasn’t been able to come to visit Robyn’s house even though Meri was following the rules.

Robyn tells Meri that she didn’t sign up for monogamy. Robyn’s tired of Kody being underfoot, and Robyn tells her she’s worried about “the kids that aren’t seeing their dad and the wives that aren’t seeing Kody.” Robyn says that her mom calls her “the Brown family scapegoat.” Meri feels like she’s an outsider and says that Kody told me, “We can be friends and that’s all.” Robyn says that Meri is mourning the marriage that she lost.

Meri and Robyn are sad that the family slid into “doing their own thing” rather than being one cohesive unit and deciding things as a family. Where’s Kody’s whiteboard… “Where we go one, we go all.” Kody has lost the plot. They had no plan for adult children, many children spread out around the country, and the pull of the moms to see their distant children. Every family with adult children or married adult children goes through this. Many families face this with alternate Thanksgivings or celebrating at alternate times. Why can’t Brown Family Thanksgiving be another day?

Janelle visits with Christine about the fallout of the last family meeting when Janelle walked off and told Kody to f— off. Christine sees how Janelle is devastated because Janelle’s relationship with Kody has been good. Christine is looking at it more like a balance scale with Kody a few hours a week on one side and her kids, Janelle’s kids, and the distant kids on the other side. Christine and Janelle are always going to choose their children first. The truth is that Meri does the same and Robyn does the same, but they abide by Kody’s other rules, too.

In Robyn’s production interview, she says, “my kids respect their dad.” So, once again, it’s about who is willing to do what it takes to see Kody and who isn’t. Janelle and Christine also understand that Janelle’s children orbit around Christine because she functioned in every way like another mom to them. This is what this show started as and was actually supposed to be about—a large family working together and supporting one another.

Meri is excited to finally go to Robyn’s to visit INSIDE the house and hug the children. The kids are all excited and emotional about seeing Meri and hugging her. The kids tell her that they were watching home videos where their mom was break dancing… cut to footage from 1998. Meri was so pleased that the kids love and miss her. Where’s Kody?

Robyn tells her kids that they aren’t going to be together as a whole family for Thanksgiving and that Janelle and Christine are going to Utah. Robyn tells her children that Janelle’s kids aren’t able to follow the rules Kody laid out, so Janelle is going to her sister’s house in Utah. Robyn is worried that her kids will perceive it as the rest of the family not wanting to be around her children. As Robyn tells Dayton, Aurora, Brianna, Solomon, and Ariella, that Christine is traveling to Utah, also, Aurora thinks that none of them want to follow the rules. Aurora asks, “They’re the ones that are constantly, like, pushing for the family to get together. And when we finally have common ground on like, ‘This is what we need to do,’ they kind just went, ‘Screw it’?”

Robyn tries to explain it, but then can’t quite figure out how to say it without saying that they all feel “sad and rejected.” But she tells the kids that Meri will be there. It’s interesting that there’s no discussion about Mariah Brown and Audrey Kriss visiting or not, following Kody’s rules or not.

Normally Meri makes the turkey for Thanksgiving, but Robyn decided to make the turkey, so Meri couldn’t figure out how it could be Thanksgiving without making a turkey herself, so she did. And she brought the turkey to Robyn’s house. It’s a Rice Krispie Treat turkey with candy stuffing. Kody loves it! Kody is enjoying his peaceful, amicable, non-marriage relationship with Meri. Meri and Robyn work well in Robyn’s kitchen. Kody is obviously skittish about wives sharing a kitchen after what happened decades ago with Meri and Janelle.

Christine brought Gwendlyn, Ysabel, and Truely to Aspyn Thompson and Mitch Thompson’s house for Thanksgiving. Paedon Brown was there. And Mykelti Padron and Tony Padron were as well. Christine enjoyed her Kody-free, problem-free Thanksgiving. Janelle traveled to her sister’s house in Utah with Gabriel, Savanah, and Garrison. Kody says that those at his table are loyal to him and respect him and he’s thankful for that. Kody says it is quiet and easy to have Thanksgiving like this, and then he adds, “If you want an easy life, be a monogamist.”

Next time, Janelle deals with the death of her mother. Kody and Gabriel finally have a conversation/confrontation about what Kody believes for the family and how Gabriel views what’s happening. Robyn and Janelle have a deeper conversation about whether or not these rifts in the family were around pre-Covid (hint, they were) and whether or not plural marriage is working for them (hint, it’s not). Then the next loyalty test happens… The Brown Family Christmas.

Sound off in the comments your thoughts on this episode, particularly, did you think that Robyn’s conversation with her children was staged? There was a Christmas tree in the background during that alleged pre-Thanksgiving conversation. The Christmas tree didn’t seem to be there at the “actual Thanksgiving.” Maybe it was just the camera angles.