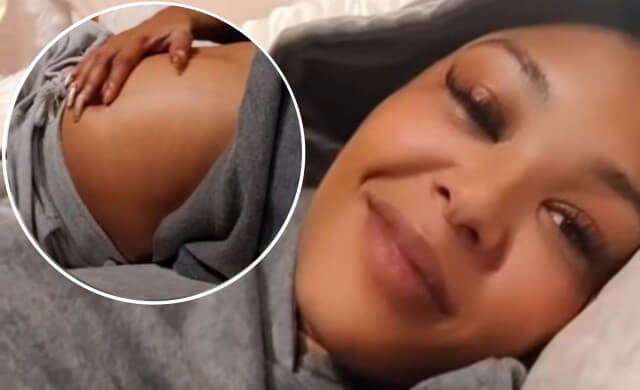 Love and Hip Hop: Hollywood star, Moniece Slaughter, is pregnant. The reality star recently took to Instagram Live to share her happy news with her followers.

Moniece revealed that she was expecting a daughter, whom she plans to name Dior. The VH1 personality did not spill the identity of her unborn child’s father but did clarify that she did not share the same father as her son.

“No, my daughter’s father is not Fizz,” Moniece told her Instagram followers. “I am due two days before her dad’s birthday.”

“I choose not to talk about her dad,” Moniece added. “It is what it is. Kam is excited.”

Moniece shared that her pregnancy had not been problem-free.

“I have endometriosis, hypertension, ovarian cyst,” Moniece revealed. “My daughter is measuring smaller than she should.”

“I have been really stressed and my daughter is measuring smaller than she should for how far along I am,” the expectant mom explained.

“I can’t believe I’m about to be a single mom for the second time,” she added.

“I can’t believe I have a daughter, a mini-me,” the reality star gushed. “This has been my greatest fear and my greatest blessing.”

“I am assuming my daughter is going to be what bridges the gap between generational curses,” the VH1 personality continued. “I’m going to be the mom to her that I never had.”

Moniece shared the story behind her unborn daughter’s name, responding to curious fans.

“Dior is the life that was conceived in the wake of two traumatic losses and I just felt like it was meant to be,” Moniece told her followers. “I know I said I didn’t want any more kids. Dior was unexpected and I have to choose to love her in spite of. All I can do is make it to full term.”

Moniece made headlines in November after she was accused of getting physical with another woman at a party thrown by Cardi B.

The Blast obtained legal documents that confirmed a claim by a 40-year-old woman, who alleged that Moniece attacked her inside the star-studded bash. The woman filed for the order against the reality star in Los Angeles County Court. The reported victim asked the court to require Moniece to keep a distance of 100 yards.

The woman stated in the filing that she was at the rapper’s event when Moniece—“walked into the party and walked over to me attempting to strike me, but I caught her hand and held it until security came.”

“She then came back a second time and threw a drink on me and some friends and then attempted to attack a female that she believed had her hand on my shoulder,” she continued.

The person claimed that she could not disclose the names of witnesses to the alleged attack, because they are “celebrities.”

The woman clarified in the docs that the “strike” was really a “punch,” explaining that Moniece “spotted me then walked over with fist balled throwing a punch but I caught her arm.”

The woman also claimed an ongoing threat, alleging that the VH1 star “threatened that she will violently attack me and any female she sees with me.” The alleged victim added that the reality star had also been “verbally abusing and spreading false allegations and harassing me and my family for the past 2 months every day” on the internet.