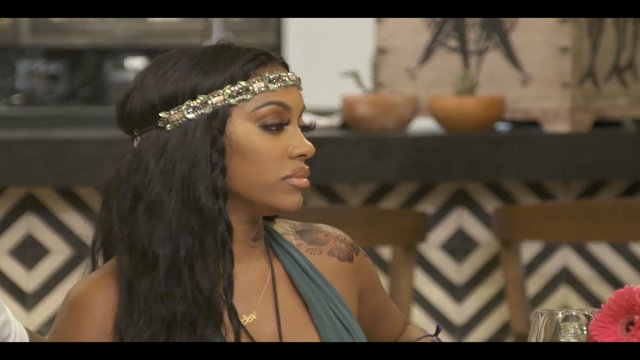 This week on a brand-new episode of Porsha’s Family Matters, Lauren Williams got the entire table together when she demanded everyone stop talking about the Versace robe! Lauren wants to bring the family together and this trip is already off to a bad start. Lauren instructs the crew to look at themselves and Porsha gets up to give a half-hearted apology. Mama Gina isn’t feeling Porsha’s apology and it’s all over Mama Gina’s face! Porsha admits to trying to put the blame on Dennis and the crew finally simmer down. After Londie interrupts Porsha’s speech, Lena attempts to teach everyone about intentional listening and clearing their throat chakra. The group is going around the table listing their intention for the trip and one of the aunties goes off the deep end.

Aunt Darlene starts by saying she’s happy to know who she really is, but then goes on a tirade about how much she dislikes her feet! The entire table is confused but being respectful as Aunt Darlene auditions for some unknown movie, that no one is going to see, LOL. Aunt Darlene admits to wanting to get closer with her daughter Storm, but Storm is clearly over her mother’s drunken performance. Mama Gina suggested that Storm go and console her mother, but Storm seems to be hesitant to be vulnerable. Aunt Liz has had enough and says she doesn’t know why she’s there anymore! She doesn’t know these people and she’s tired of the mess! Porsha explains that Dom is Lauren’s best friend and Aunt Liz wants the family to get closer. The food finally came out and Mama Gina needed to leave the room due to her shellfish allergy.

Storm has the talking stick now and instigates another issue, by claiming that some people at the table have a problem with her. Dennis tries to straighten Storm out, but rules are rules and Storm has the stick. It’s Dennis’s turn and he readily admits that the family is broken. He doesn’t want to put it all on Porsha but let’s be honest; this is all Porsha’s fault! Dennis’s intention for the trip is to bond with Simon, in order to figure out their co-parenting roles. Storm starts yelling at Dennis and it’s clear Storm doesn’t like Dennis. Dennis gets up and leaves, but Mama Gina comes in hot to defend her son! Dennis pulls her back, but Mama Gina is ready to fight! Outside, Mama Gina asks Lauren why she didn’t quiet the Storm, but Lauren clearly lost control of the night.

Storm packs up and leaves and Porsha goes after her mini-me. Simon is there watching the mess go down and still seems to want this life with Porsha. Porsha thinks Dennis is trying to take all the attention, but Dennis is just Porsha’s scapegoat. Lauren the assistant visits Londie and Lauren in their suite, and Lauren’s upset that Dennis is moving rooms. Lauren thinks Dennis really came for Storm, but Londie feels Storm is disrespectful. Apparently, Storm and Londie had issues in the past and don’t seem to be getting any better. Dennis comes into the suite and states he’s changing rooms because Lauren couldn’t even control her session. Lauren admits to being unable to control her brother-in-law. Dennis is staying in Mexico because of Pilar, but he also has a lady friend coming as well.

Simon and Porsha settle into their suite and Simon busts open a fresh cigar to decompress. Porsha wasn’t expecting the issues at dinner, but Simon sure did. Simon believes in letting people present their authentic selves, and Porsha’s confused about where the group goes from here. Simon wants to build this family and tells Porsha he wants to meet Dennis for breakfast. Simon’s only request for Porsha is to pack all of Dennis’s things and make sure he gets them back safely. Producers ask Porsha why she kept Dennis’s things and she gives an excuse claiming to have confiscated the robe for herself. Simon also wants Porsha to tell Mama Gina to mind her business, but we know Porsha’s afraid of Mama Gina!

The next morning, Dennis and Simon are eating breakfast awkwardly as Simon appears irritated as he stirs his coffee. Simon thanks Dennis for meeting with him and thanks Dennis for attending the trip. Dennis wants to bond with Simon for the sake of Pilar and Simon wants Mama Gina to respect Porsha. Dennis admits that Mama Gina wants to fight his battles but wants everyone to be on the same page. Dennis is excited to get to know Simon and even jokes with Simon about potentially giving Dennis his robe back. The men laugh and genuinely seem to enjoy each other’s company. Dennis takes this time to tell Simon that he has a date coming to Mexico. Dennis explained his point of view and Simon doesn’t have an issue with it and offered to inform Porsha of Dennis’s plans. It’s time for meditation and Lauren is getting ready as Lena encourages Lauren.

Everyone seems ready to get their Zen on and Dennis apologized for his actions the night before. Lauren’s feelings are hurt because Porsha isn’t there but continues with the meditation session. As Lauren directs the meditation, Dennis admits to still loving Porsha as we get a montage of the mess that’s already transpired. After the meditation is complete, Dennis suggests Mama Gina come next time. The changes are hard on Mama Gina and Dennis feels meditation will help his mama come to terms with their new family dynamic. As the day continues, Porsha is working and Mama Gina is relaxing as Dennis gets his sleep on. Londie and Lauren are talking, and Londie reveals to Lauren that Dennis has a date coming. Lauren wants to warn Porsha because they know how Porsha is and this won’t be pretty.

The crew is heading to the bus and getting ready for their next adventure. Dennis is salty because Lauren told Dennis his “work” can’t come to the Cenote. Aunt Liz wants to know when they’ll meet the women in Simon’s life but doesn’t give a clear-cut answer. At the Cenote, the guide gives instructions on what to expect. Before the crew goes into the beautiful waters, Lena conducts a short meditation. Londie goes first and releases any anger while working on her patience. Aunt Darlene wants to let go of the years that she wasn’t present for Storm. Aunt Darlene was busy with business and asks Storm for a second chance to make things right. Aunt Darlene asks Storm for a real hug and with some pressure from the group, Storm gives in. As Storm approached her mother, the two barely touched before Aunt Darlene has a full emotional breakdown!

Screaming and crying, Aunt Darlene thanks Jesus, and everyone is confused about what to do. Lena is waving some tool in Aunt Darlene’s face as everyone tries to console Aunt Darlene. As we move on, Aunt Liz released the hurt that Black people have experienced over the years. Aunt Liz gives us a look into what it was like growing up during the Civil Rights Movement and the horrible images she would see in her dreams. Aunt Liz wants to find out who Elizabeth is, without the haunting of this country’s actions. Mama Gina wants to release the negative part of her that doesn’t allow her to forgive. Mama Gina asks for forgiveness if she made anyone uncomfortable. Dennis states that he’s proud of everyone and will let go of things that aren’t important. Dennis will be more intentional about putting himself and Pilar first. Porsha wants to talk more with Mama Gina but admits she’s not ready to face Mama Gina, yet.

Lauren feels she needs to forgive Porsha for their working relationship and reveals she stopped working for Porsha because she felt undervalued. Of course, Porsha doesn’t feel that way, but we all know Lauren did the most for Porsha! Lauren wants to use the water to help release and cleanse the negativity from everyone’s life. The crew gets into the water and is having an amazing time. It’s time for the rooftop dinner and everyone seems to be in a better mood than the night prior. Dennis is missing in action and Mama Gina tells the group Dennis had other plans. Porsha has her antennas up as Lauren pulls Porsha to the side. Lauren gives Porsha the bad news that Dennis brought a date. At the table, Mama Gina tells the table about Dennis’s date but doesn’t offer too much information.

Mama Gina tells the table it’s the woman’s birthday today and he took her out. Porsha calls Mama Gina toxic and that now Dennis is toxic as well. Porsha’s still upset about Mama Gina accusing her of cheating, but Lauren can see right through Porsha’s antics. Porsha texts Mama Gina at the table and Mama Gina is loving seeing Porsha squirm. Porsha isn’t waiting on Dennis or his date to eat, and the energy immediately changes. Lauren thanks Lena for being there since it’s her last night in Mexico. Aunt Liz isn’t comfortable with Lena’s teachings because she’s afraid Lauren will have open wounds without a way to fully heal. Lauren has a life coach coming and wants everyone to be open.

Storm opens up about a past, toxic relationship and gives us a rundown of why she’s so standoffish. Londie asks Storm about her aggression from last night and Storm starts going off. Londie refuses to apologize, and things go off the rails quickly. Porsha continues taking Storm’s side and Simon attempts to be the voice of reason. Storm admits to not being open to getting to know Londie, and no one is listening to each other. Tomorrow, the crew has walking meditation with ATVs — with mess surely included, LOL. Be sure to come back next week for a brand-new episode of Porsha’s Family Matters.