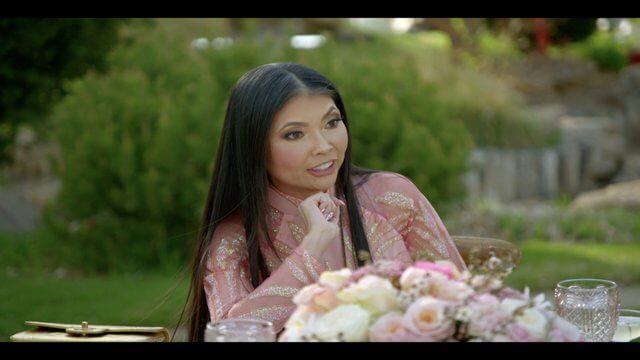 This week on The Real Housewives of Salt Lake City, Lisa Barlow sits down with Jen Shah following Jen’s arrest and release. Whitney Rose talks to Lisa about Mary Cosby. Then the group sits down together for an explosive meal where Meredith Marks is fuming that Jennie Nguyen invited her to a gathering where Jen is present. Poor Jennie wants to just have a nice talk-it-out meal together.

Meredith is planning a party where she hopes no one talks about anything happening in the friend group. Brooks Marks is working on another design and shows his mom, a blazer with his logo (name tape) across the front. Um, ok. Jennie shows up at Meredith’s house with the requisite blazer. Meredith asks Jennie about having more children, and Jennie tells Meredith that Duy Nguyen proposed a sister-wife. This again? Lisa arrives, the alcohol flows, and next thing you know, Jennie is being laced up in a sexy corset and a blond wig from Meredith’s closet.

Two days later, Jen is shown driving her own car. Looks like First Assistant Stuart might be busy?? Jen calls Heather Gay and says that Lisa finally agreed to meet up. Jen says that she and Lisa used to talk 3.2 hours a day before her arrest. What. the. what? Jen runs a business (now denying she runs a business) and Lisa runs a business. Both are wives and moms. How in the world do they have three hours a day to talk to each other? And about what? And Lisa is now saying that she doesn’t know about any of Jen’s alleged business dealings? I wonder how many times per day, Lisa says to Jen, “I love that.”?

Lisa stumbles over trying to say that she thinks Jen is innocent. Jen is very direct that she wanted Lisa to be there for her. But Lisa had to “think through things” because her feelings were hurt. Lisa takes the conversation back to the Fresh Wolf photoshoot and how Jen attacked her. Then Jen says that doesn’t compare to what she’s been through. Then they argue about who hurts more with one-upmanship and fake tears. Then Lisa rolls her eyes when Jen shares that Heather picked up the phone in her time of need.

Heather’s brother, Tyler, is staying in her only-pink-sheet house. He came from Switzerland for a visit. They talk about a letter that Tyler wrote to Heather in which he says that he made a similar choice after Heather left Mormonism. Tyler said that Heather leaving sparked him to look into the reasons why she left. They both feel duped by some of the circumstances of Joseph Smith’s life, such as marrying a 14-year-old, not being taught to them. Heather says that what they were taught is, “you’re either a faithful member, or you’re against the church.”

Tyler admits he’s still feeling trauma and anger and sometimes thrilled to be out and that he saved his children. Tyler feels like he is a bad parent for raising his children in a cult. Tyler tells Heather that he was sad that he wrote a letter to her, and Heather didn’t call him. Heather was tormented by the thought that she might affect someone else’s faith. Heather says in her production interview, “It’s really hard to be a role model and a traitor at the same time.”

Heather didn’t want to push anyone to leave the church. She just knew that she couldn’t be herself and also be Mormon. Tyler tells her, “You saved my family. You haven’t ruined anything.”

Jen’s family is shown saying prayers for the last day of Ramadan. Coach Sharrieff Shah Sr. pulls Jen aside to talk. Coach wants to downsize their Shah-mazing rental into something more affordable so that they can fight for Jen’s freedom. Jen needs to let him lead, but she won’t. She thinks they need to be able to house their extended family. In Jen’s production interview, she says, “I employ the vast majority of my family. It’s probably upwards of $50K per month.” The legal fees are likely to be more than $1 million, maybe $2 million she says. Coach is supportive of her innocence and doing what it takes to prove it, thinking they should “conserve”.

Lisa and Whitney meet at a crater for paddleboard yoga. Whitney is looking around as if she’s trying to figure out if Lisa is going to drown her right on the spot. Lisa takes off her yoga pants to wear denim shorts. Those denim shorts have to be heavy when wet. Lisa wants to talk about the ending to the Vail trip. Lisa explains what happened in the room with Mary. Then Whitney tells Lisa that she called Cameron. Whitney says that the rumor is that “Mary and Robert [Cosby Sr.] are predators.” In her production interview, Whitney doesn’t want to be specific about what she heard. Lisa reveals what Mary said in her room in Vail, “See what happens when you mess with my church. You go to jail.”

At Jennie’s Pho luncheon at the International Peace Gardens, the setting is beautiful. In true Housewives style, Jennie wants the group to learn more about her culture, and then that’s not what’s gonna happen. Lisa goes right in asking about “another wife thing.” Jennie wants to send Duy to therapy. Mid-conversation, Meredith is upset that Jen was invited when she was invited after her statement in Vail. Awkward. They toast to peace, but even without Mary, the tension rules the moment. As they look at their place settings, Heather is upset at being seated next to Mary. Mary arrives late wearing a blond wig. Then immediately Lisa shows the picture of dominatrix Jennie in a blond wig. And Mary just said, she likes Jennie’s “slanted eyes.” Good heavens. Heather and Mary faux make-up at the Pho lunch. They joke about how “the peace garden works!” Then Mary and Whitney are sparring like the middle school lunch table about fakeness, who’s fake, who’s the fakest fake.

As they joke about how fab Jen looked at her arrest, Jen says, “I thought I was going to Vail, not jail.” Jen is revealing too much about her arrest and alleged wrongdoing to the group, and Mary’s not believing that Jen didn’t know anything about what was going on.

Jennie and Lisa tell Jen that everyone was talking about her. Everyone talks over each other and tries to defend that they were bombarded by calls and texts, and Mary says, “Jen, I did not talk about you.” The other ladies seem stunned because Mary did say terrible things about Jen on the Vail trip, even going as far as to say that she “never saw nothing good in her.” Mary went on to say, “because I knew what she was capable of.” Jen says in her production interview that the women are fighting over “who said the worst thing” about her. And just like that, there goes the peace garden.

In her production interview, Mary says, “Do I hope she’s innocent? Yeah. Do I think Jen is innocent? No.” Then Lisa and Mary spar next. The whole group is worked up again about Mary’s rendition of what happened in Vail. Mary and Meredith walked off after Jennie calls Mary a liar. Then Jen storms off. Oddly enough, then Jen and Mary are walking arm-in-arm.

Next time, Jen’s mom is going to liquidate her retirement to give Jen $1 million dollars? Meredith and Mary meet to figure out where they stand with the other ladies. And Jennie is going to ask Mary why Mary talked about “slanted eyes.”