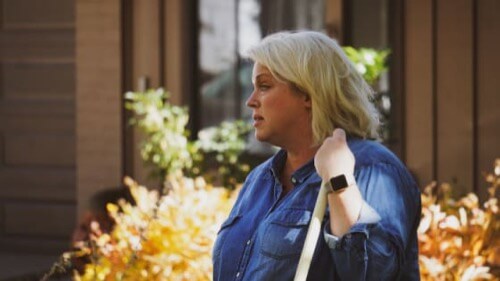 This week the tensions mount even more on Sister Wives as Kody Brown and Christine Brown deal with the implosion of their marriage and fallout from Kody not being at Ysabel Brown’s out-of-state scoliosis surgery.

Christine is upset that Ysabel had to wait so long for the surgery, but if some media reports are accurate, the Browns had to purchase health insurance for her and then wait months for it to be in effect and for a “deposit” of about $50,000. Christine admits during this episode that she had to apply for health insurance coverage. Christine held an online fundraiser to pay for part of the surgery as well. During the surgery and recovery, Christine and her younger daughters are staying with Christine’s sister, Wendy, and Wendy’s husband, K.C.

Is anyone else feeling bad for Kody that Christine told him not to come because she didn’t want him there, and then blames him for not being there? Christine is pretending about so many things but then is angry at Kody. In Meri Brown, Janelle Brown, and Robyn Brown’s production interviews, they express how they wish that Ysabel could be surrounded by more of her family right now. Christine says that “We decided not to do the traditional rod surgery.” We?

Meanwhile, back in Flagstaff, Kody is outside Janelle’s house checking on Janelle after her return from Maddie Brush’s house. Janelle was out-of-state helping with little Evangalynn Brush’s surgery and recovery. Kody wants to figure out, with Janelle, how they can come up with a plan so that he can come back into her home. Janelle knows that Garrison Brown and Gabriel Brown are the hot buttons with Kody, refusing to abide by his Covid rules for the family. Garrison was pre-approved for a home loan but doesn’t have enough for a down payment yet, so Janelle is going to let him stay. Janelle has prioritized “launching” her kids into the world in a stable way. Kody is more of a “he’s an adult and should figure it out” kind of parent.

Janelle tells Kody that her children are the “center of her world.” In polygamy, early on in their marriage, Janelle learned not to center her world around Kody. In individual interviews, Robyn and Meri say that Kody and the children are equally important. Christine says that her kids are more important than Kody. Kody is talking honestly with Janelle about how he feels in plural marriage, that he doesn’t matter. As he talks to Janelle about Christine, he’s frustrated that things have been getting worse for years. Kody feels constant pressure to make her happy.

But then he says to Janelle, “You and I don’t have a crappy relationship and yet I am still being marginalized.” Kody is upset that Janelle is taking risks with their relationship, mainly with regards to their sons not complying with the “family covid rules.” Janelle is caught in the middle of Kody giving ultimatums and her sons doing the same. Kody sees her answer — that she misses him but doesn’t know what to do with the boy—as “stonewalling.”

Couldn’t they all save some money by moving the compliant family members into one home? Then the non-compliant could live in a second home? Meri has a huge house and travels. Couldn’t Gabriel and Garrison stay with her or with Christine so that Janelle and Savanah Brown could be around Kody? Where is their family therapist? She could get this sorted. In his production interview, Kody says that Janelle wants him to compromise the safety of the entire family because she won’t enforce his rules with her children. Kody walks off. Kody is struggling that he’s not the head of his entire family, only some households.

The doctor comes in to see Christine with a good report about Ysabel’s surgery. Is anyone else wondering why the doctor is in a suit, not scrubs, and no mask? He said he had to “release” a few more places in her spine than he initially thought. That sounds brutal. There should not be cameras filming Ysabel in the recovery room. Sigh. The great parenting choices continue, right? Christine did credit Kody for calling and being a big cheerleader.

Meri is missing her family. Janelle is trying to keep in touch with Meri. Janelle and Christine are keeping in touch frequently. Kody thought that polygamy wouldn’t ever result in true loneliness. Meri is alone and talking about being friend-zoned by Kody. Meri is discouraged that Kody seems done with her, but she’s determined to stay. Meri says, “I would rather that we have a lot more interaction with each other.” She feels unconditional love from Solomon Brown and Ariella Mae Brown, so she’s going to do what she can to keep that bond. Kody says, “I’ve got four wives who, during Covid, have chosen not to interact with each other. They’re mad about it. But they’re not even calling each other on the phone.” He goes on to say, “Covid has revealed us. And we are sad, sorry, lonely, little people.”

Ysabel is released from the hospital, still in pain, with a full bag of medications. Aspyn Thompson and Mitch Thompson and Hunter Brown visit New Jersey for support. Christine is drawing attention to the fact that the three of them took all the Covid risks to be there for Ysabel… much shade to Kody.

Back in Flagstaff, Christine gathers, socially distanced, with Kody and the moms on her porch. Janelle offers to take some medication shifts, even offering to sleep in the yard in a tent. Ysabel comes out to see her dad and the moms. She shows off her scar. Then Christine goes on to tell stories about how many times Ysabel asked for Kody, and Christine dishes out disappointment and shame… all around. Kody was appreciative that Christine was carrying the burden.

Next time, Christine confronts Kody about not allowing Ysabel into Robyn’s house, but he lets a nanny into the house. Wait. What? There’s a nanny coming and going (or maybe she lives there)? When the show first started, about 11 years ago before Robyn, Kody, Janelle, and Meri worked outside the home, and Christine took care of 13 children. Alone. So, again, there is a nanny? Quite a few of these sister-wife resentments make a little more sense now, right?

It should be interesting (or futile) to once again have Kody and his wives get together for a meeting about the “rules for family social exposure.” Robyn gets defensive that these are not her rules, but will the rest of the family believe her?