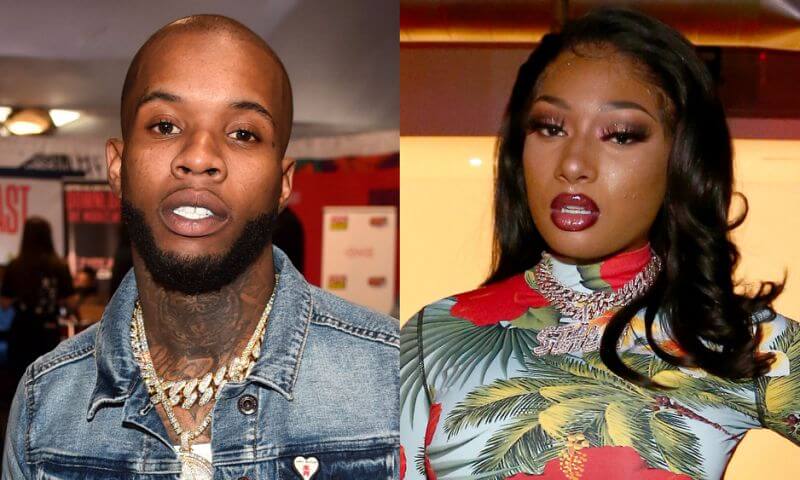 Tory Lanez fired gunshots on the ground near Megan Thee Stallion’s feet while yelling “Dance bitch, dance!” injuring the rapper, according to the testimony of a detective on the case. TMZ reports that Los Angeles Police Department Detective, Ryan Stogner, took the stand on Tuesday during a preliminary hearing about the incident.

He testified that Megan told him that Tory was drunk during the episode, which occurred in July 2020. He explained that the incident was sparked by a conflict between the two performers after a party in the Hollywood Hills, around 4:30 am. He said that Tory was standing on the step board of an SUV when Tory fired the shots at Megan, who was outside the vehicle. Megan reportedly “immediately felt pain to her feet, observed blood, fell to the ground, and then crawled to an adjacent driveway of a residence.”

The detective added that Megan disclosed that Tory apologized and begged her not to report the episode. He supposedly offered to buy her silence, because he was on probation at the time. Detective Stogner clarified that Megan initially claimed that her injury occurred when she stepped on broken glass. The artist later reportedly confessed that she was nervous amid a tense political climate, and was afraid that cops might shoot Tory if he admitted to having a gun in the car. Stogner confirmed that Megan had communicated her concern.

A recorded phone call played in the courtroom revealed Tory speaking to a woman from jail, who was also present when the incident went down. Tory apologized for something he did while intoxicated, during the conversation. Tory’s attorney had to step in to calm his client down after he angrily shouted “How you gonna tell me what I apologized for?”

Megan claimed that she sustained injuries as a direct result of Tory shooting at her feet. He denied her narrative and pleaded not guilty to both charges.

The judge decided to move forward with a trial, which is scheduled to begin on January 13. Tory is facing one count of assault with a semiautomatic firearm causing great bodily injury, and one count of carrying a concealed, unregistered weapon.

“Tory Lanez’s defense lawyer Shawn Holley questioned Stogner on dispute that led up to the shooting. She said “argument in the car escalated” when it was revealed Tory & Megan had been in some type of intimate relationship,” she tweeted.

“Holley said the other woman in the car, Megan’s former assistant/friend who “had a romantic interest in Tory,” became jealous and claimed Megan “back-doored” her, the reporter wrote on Twitter.

Dillon dished that there might be body cam footage to back up Tory’s story.

“Holley suggested Tory later told police, ‘I was just trying to protect my girl.’ She asked Det. Stogner if he knew about that statement, citing police bodycam footage,” she wrote.