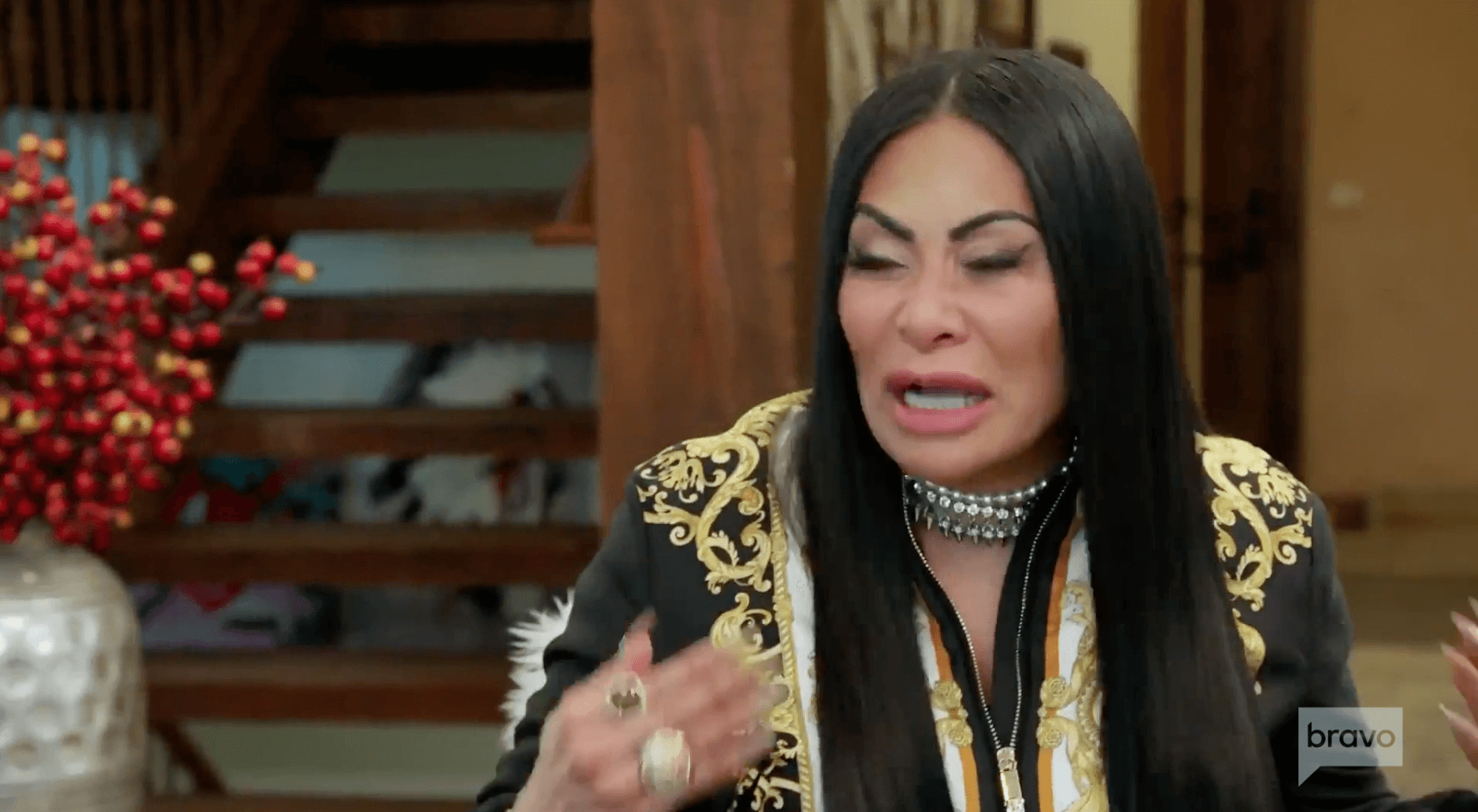 The Real Housewives of Salt Lake City continues with some fractured friendships from the trip to Vail. This episode promises the return of the Shah-mazing Jen Shah. As Lisa Barlow debriefs from the Vail trip with John Barlow and Heather Gay debriefs with her daughter, Ashley Gay, and Mary Cosby says to her husband, Robert Cosby Sr., that maybe her friends lumping her in with Jen was “a brown girl thing,” and Whitney Rose debriefs with Justin Rose [in their product-placement t-shirts], and Jennie Nguyen debriefs with Duy Nguyen, friendships are still in turmoil while Meredith Marks seems unbothered. Jen texts Lisa for the first time since her arrest, using a new phone number and wanting to meet for lunch or coffee.

Heather gets a call from Jen and accepts an invitation to meet her in an hour for lunch. Jen says, “This is what I asked God to show me. Who are my real friends?” Heather was the only one of Jen’s friends to pick up the phone “with no questions asked.” Jen says to Heather, “I need a friend right now.” And Heather reaches across the table, grabs Jen’s hand, and says, “I am your friend.” Heather is doing what she wanted people to do for her when she got divorced, show up and not ask too many questions.

Jen tells Heather the account of her arrest when the cars pull up around her, and she thought she was being kidnapped. She is telling the story of being arrested and being handcuffed to the chair as if she is telling the story of finding a one-of-a-kind Birkin bag. Jen says she didn’t think she needed an attorney. She says, “I didn’t do anything.” They took Jen to a federal building. The police had been at her house, and Jen was upset about that situation.

Jen says that they held her son, Omar Shah, “at gunpoint.” Then Jen says that AR-15s were pointed at her son and the other boys in the house. Jen says that it makes her sick to think what could have happened if one of the boys made the wrong move in that moment. Jen says that her family from South Central, Los Angeles, are here to get away from violence, but the police come to Park City, Utah. Jen goes on to say, “It’s really unfair what the government can do to you without having any real proof or anything.”

Heather asks about Stu Chains, Stuart Smith, Jen’s first personal assistant. Jen saw Stuart when they were being detained. Jen says with regard to Stuart, we are not partners. Jen says, “Stuart had his own businesses he was running. He had his own things he was doing. That has nothing to do with me.” There is the first attempt to throw Stuart under the bus. Heather asks Jen if Stuart knew, and Jen says, “I don’t know. You know, I would say no, but then I’m like, am I being naïve?” Heather says in her production interview that she doesn’t understand why Jen is distancing herself from Stuart.

Then Heather tells Jen about the reactions of her friends as news and speculation were revealed on the bus trip to Vail. Heather mentions that Lisa was talking to all of her attorneys. Jen is upset that Lisa would believe the internet over talking to her directly. Heather tells Jen that Meredith is done with Jen after everything that has happened “up to this point.” Jen says she is expecting a big apology from Lisa and Meredith when she is proven innocent.

Whitney [in another company shirt] is talking to Justin about her photoshoot for her rebrand. Justin makes a comment in front of their daughter that this is a hobby business. He wants Whitney to be accountable for the money she took from their savings. Justin wants to know the numbers. Whitney applied for a million-dollar line of credit where Justin needs to co-sign, but if they aren’t approved, she needs another $250,000 from Justin. Their daughter stares at them over her Chipotle bowl. Justin is worried about their future. Justin thinks that Whitney is undermining his plan to provide for the kids right now and their future. Whitney says, “I’m really bad with money.”

Mary asks an organizer come to her home to help with her closet(s). First, they look at Mary’s bedroom and then her closet in her room packed with more clothing on bowed hanging rods. This is where Meredith could bond with Mary. Meredith could have that situation fixed in no time! Mary says she has bonded with things instead of people. Then Mary tells the organizer, “The more things I have, the bigger my heart is.”

Lisa meets Meredith at a stable to ride horses. Lisa tells Meredith that Jen reached out to her. Meredith is still upset that Lisa formed a friendship with Jen after Jen started attacking Meredith, her family, and her business. Lisa says that Jen treated her differently when they were in public than private and depending on whether Jen needed her or not. Lisa is upset about what Whitney and Heather did and said in Vail, that Lisa brought Cameron to the fund-raising event to meet Meredith and stir things up about Mary.

Jennie and her daughter, Karlyn Nguyen, enjoy some mother-daughter bonding at a restaurant while sampling food and planning the menu for Jennie’s Vietnamese pho party. Jennie wants to host a meal to bring the ladies together to “talk things out” in a traditional Vietnamese way. Karlyn, the mini food critic, is sampling everything. She is adorable.

Jen and Coach Sharrieff Shah Sr. sit in the kitchen, eating Popeye’s chicken. Jen asks Coach about his work for a hot minute, then goes on to talk about how no one is answering her calls except Heather. Jen has an outburst over no one supporting her. In the past, when she feels slighted, she starts plotting attacks and revenge. Coach’s lunch is interrupted by Jen telling Coach, “I am innocent. I did not do any of those things.” Then she goes on to say, “I knew nothing of this. I didn’t do anything.” And Coach says, “I believe you.” Then she tells him that the retainer is about a million and a half dollars. The poor man can’t even enjoy his chicken and biscuits.

Jen feels betrayed that they have helped Coach’s family for years and haven’t heard from anybody. Coach tries to reassure her that even though she hasn’t heard from his family, people love her. Coach says, “Our faith will not falter. And I will not leave you. Period.” Is anyone wondering if the husbands reached out to support Coach?

Whitney is hosting a photo shoot for her rebranding. Heather and Jennie show up to support her. Then Whitney admits in her production interview that she spent $20,000 on the photoshoot. Jennie is confused that all of the labeling/branding is Iris + Beau, not Wild Rose, and there is no product, just roses, and a puppy. The discussion turns to Jennie inviting everyone to a pho night and Jennie wants to invite Jen. Then Heather reveals that she had lunch with Jen. And Jennie asks, “Do you believe her?” Heather takes a long pause and says, “Um, I hope and pray she’s innocent for her, for her family, and for all of us.” Whitney turns the conversation to Lisa and Mary, and Whitney reveals she got Cameron’s phone number from Angie Harrington. And Whitney called Cameron and the two of them talked for three hours.

Whitney says that rather than talk about it without Lisa, she’s going to go directly to Lisa. Whitney says it’s not in her best interest to “take Mary down alone.” Heather is going to need a few more swigs from that bottle.

Next time, Lisa sits down with Jen. Whitney talks to Lisa about Mary. Lisa reveals what Mary said in her room in Vail, “See what happens when you mess with my church. You go to jail.” Then the group sits down together for an explosive meal where Meredith is steaming that Jennie invited her to a gathering where Jen is present.