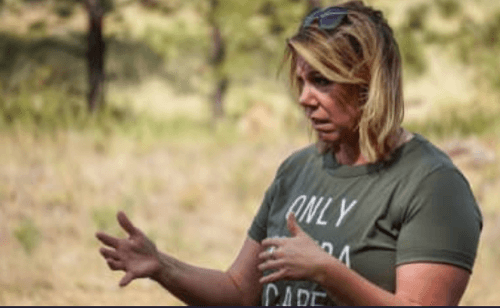 This week on Sister Wives, Meri Brown and Janelle Brown talk through some old, unresolved issues from the past. Fallout continues from Christine Brown’s conversation with Kody Brown. Building the infrastructure for utilities is finally underway on Coyote Pass. When Kody is content to let Solomon Brown roam, Janelle channels her inner “what would Robyn Brown do?” And the wives scatter—Meri to Utah, Janelle to North Carolina, and Christine to New Jersey.

Christine is taking Ysabel Brown, Gwendlyn Brown, and Truely Brown to New Jersey for Ysabel’s scoliosis surgery. Kody doesn’t think it’s safe to go during a pandemic and then risk exposure to other family members. Christine is worried about what Ysabel will do without her dad. She says that Ysabel really relies on Kody when she’s in pain, however, in the last few episodes, Kody says that he wasn’t aware the pain was “that bad.”

Janelle is in North Carolina to help Maddie Brush and Caleb Brush with Axel Brush while little Evangalynn Brush has surgery to correct her limb differences. And Meri is in Utah at her Lizzie’s Heritage Inn for the 150th anniversary of the B&B. Then Audrey Kriss announces that it’s a one-year countdown until she is married to Meri and Kody’s daughter, Mariah Brown. Meri is posting online a bake-along to make their famous family recipe for banana bread. Is anyone distracted by Mariah and Audrey’s dirty-looking hair in the kitchen?

Meri and Janelle go for a walk to talk about some of their past issues. Ironic that Meri shows up to this conversation wearing a t-shirt that says “only kinda care” to talk to Janelle. They talk about the 2019 five-adult table conversation over what they had lost (before the pandemic). Meri says that because of one conversation in 2019, she thinks Janelle is open to a conversation in 2021. This is a perfect example of why their family therapist couldn’t seem to make progress with them—no effort over long periods of time.

Meri says that Janelle talked to Kody and Christine about Meri not moving onto the lot with the pond. And Janelle did. And rightly so. When Meri was the only internal route through their house in Lehi, Utah, between Christine and Janelle, Meri would not let the kids go through her part of the house. Janelle’s kids had to go outside to get to their siblings at Christine’s side of the home. As Meri is talking about this, Janelle looks as if she is wondering what kind of trap is being set. Again, rightly so.

Janelle tells Meri very directly, “I really did have a concern about anybody, especially you, but anybody building by the pond because if I want to be out there at 5 am, I don’t want anyone to be like, you can’t be out there at 5 am.” Janelle is clear with Meri that she didn’t like the situation in Lehi, always sending the kids outside to get to Christine’s and vice versa. Meri immediately defends her stance that she needed her personal space when she was gone working so much. Janelle, again, very directly says to Meri that it felt like a “control thing.” Janelle is worried about Meri restricting access to the pond and retaliating (like the slamming doors of Lehi.) Legit concerns, Janelle.

Meri, arms crossed, feels attacked. And in Kody’s production interview, he says he has struggled for decades because his wives really don’t want relationships with each other. Janelle said what she wanted. Meri put up a wall. Stalemate. This was an attempt at a good conversation, but it’s so much discussion about a pond that’s dry half the time and may be full of that weird prairie dog plague. Remember when the realtor told the kids not to even play in the dirt? Kody is super-tuned into the Covid plague, but strips down to jump into the prairie dog plague pond at the property? Fighting over a runoff area seems odd.

Meri seems to be trying more than normal, but it’s still tough. Janelle thinks they could have 50 more years together, and they need to “move forward in a meaningful way.” They are both determined to be stuck with each other and to try to figure out it.

Kody and Janelle go to the property with Solomon to see what’s happening with construction on the water lines and the cistern, the tank that holds water that’s delivered to homes. Kody calls it a 20,000-gallon “polygamist cistern.” Kody says, there will be five water tanks, “one for each house.” And Janelle says, “There’s five houses?” Kody is still pushing for a house for himself, a rental, or a guest house. Janelle tries to talk Kody out of dropping Solomon down into the cistern pit, but Kody just wants Solomon to be a little boy and investigate. Kody and Janelle are so excited to see the infrastructure building begin.

Christine and her younger daughters are in New Jersey for Ysabel’s scoliosis surgery. The best-case surgical result would be that a 50-degree curve becomes a 10-degree curve or less. Ysabel is hurt that Kody isn’t placing his love for her above his fear of the pandemic.

Next time, Ysabel is post-surgery and wants her dad. Kody continues his crisis over Covid rules, family separations, and the continued realization that he is not the head of the family and has not been for a long time. Kody says, “Covid has revealed us. And we are a sad, sorry, lonely, little people.”