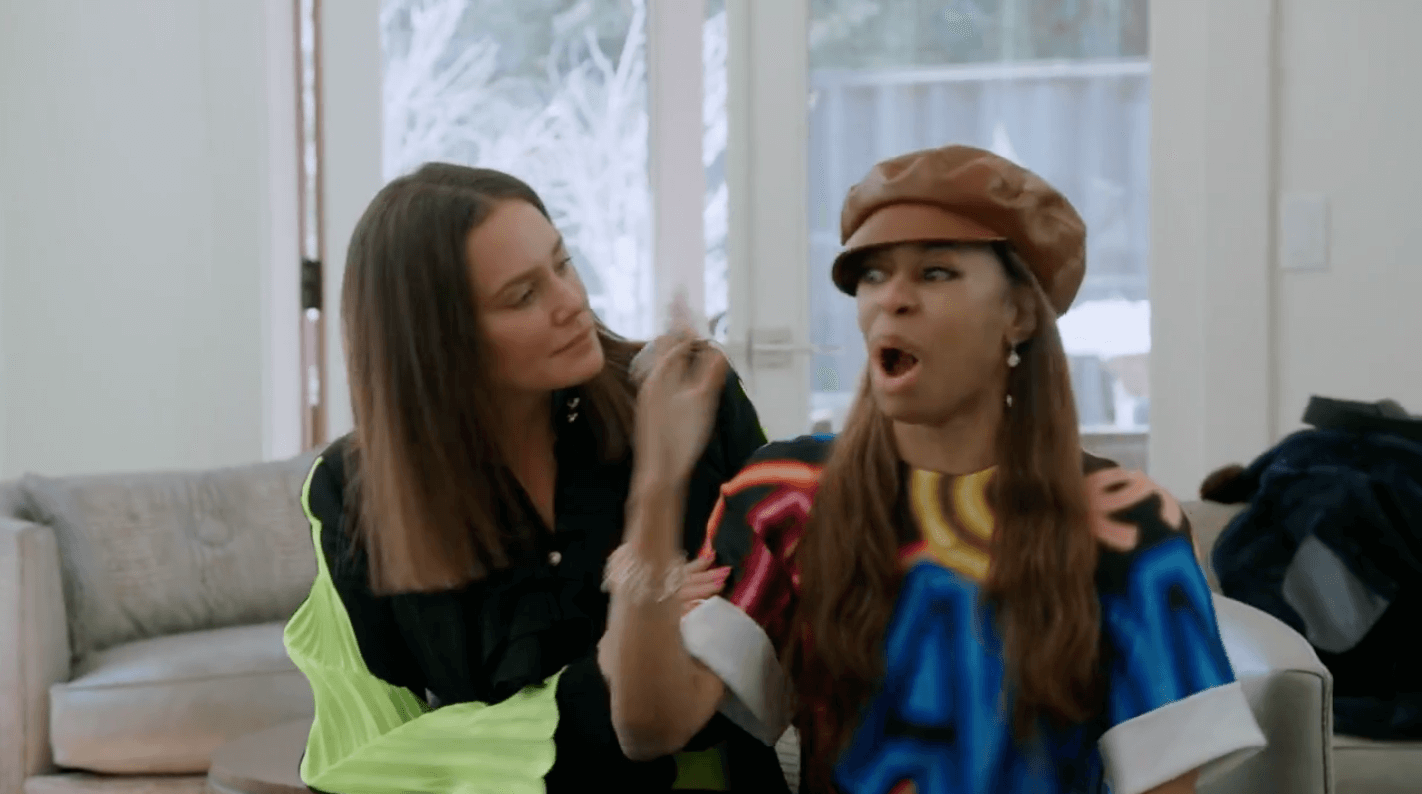 The Real Housewives of Salt Lake City season continues with the ladies in Vail, still reeling from Jen Shah’s arrest and facing bubbling accusations about Mary Cosby’s church. As the ladies—dressed up in their Swedish outfits and several shots into the evening—sit down to discuss Mary, the discussion from last week continues (without Mary.) Heather Gay draws a parallel about the group turning a blind eye to the red flags with Jen, and Heather doesn’t want to be blindsided again by another friend. In the last episode, Meredith Marks tells the ladies that she talked to Mary earlier that day. Meredith told her that Mary said it was common in all faiths for people to have negative things to say.

A former member of the church, Cameron, is shown in a prior meeting with Lisa. Cameron tells Lisa about how the church members were coerced into giving. Cameron says, “When Robert [Cosby Sr.] and Mary want money, they call church meetings together and they’ll beat you down until they get what they want.” Then Lisa asks, is that why you mortgaged your house? And Cameron says, “yes.” Lisa asks what Cameron was told they were giving for, and Cameron says, “surgeries.” Cameron called them “heave offerings.”

Lisa tells the women in Vail, that there were a lot of manipulative tactics used and that Cameron “felt duped.” Heather is wondering why Lisa feels the need to share right at that moment. Lisa has known this information for a long time. Then Jennie Nguyen tries to ask a question but gets overrun by Lisa and Meredith going back-and-forth. Lisa says she absolutely believes Cameron. Meredith jumps in to defend her friend, Mary. The women tell Meredith that there is quite a bit of first-account evidence of what is allegedly happening in Mary’s church.

Lisa leaves to “go to bed” but heads toward Mary’s room. Then Meredith goes off! She’s heard a lot worse about Jen. Meredith is angry with these women for not supporting her, her family, and her business when Jen was on the attack. Meredith thinks that these rumors about Mary are “minutia” in comparison to what her family endured with respect to Jen. Meredith’s family has been through a lot, but it’s not the equivalent of someone allegedly losing their home.

Meanwhile, in Mary’s room, Lisa is directly confronting Mary. Lisa tells her about the group conversation. Mary asks Lisa to take sides. Then Lisa says, “Okay. I’m going to ask you this directly. Do people at your church think you’re God?” Mary says, “Noooooo. Absolutely not.” Then Lisa throws Whitney under the bus, saying that “Whitney told me that. She just said it upstairs.” Then Mary is upset that Lisa is friends with Cameron and believes him. Mary says these are lies. Simple enough. Property ownership, property sales, foreclosures, bankruptcies are all public records, right? At this point in the Housewives franchise, there should just be a “receipt” portal for upload.

Then Lisa says that Jen said (at the Fresh Wolf photoshoot), that Mary is a cult leader. According to Jen, congregants are on food stamps. Someone committed suicide. Mary says that “Jen lives a lie” and dismisses what Jen says as being lies.

The next morning, Mary has a gift of some Louis Vuitton boots for Jennie. They squashed their beef the prior night under glam lights and mirrors. Jennie says, “You didn’t have to buy me anything.” Mary says, “They were already boughten, baby.” Mary pulled them out of her closet and says in her production interview that giving them to Jennie would just lighten up her luggage. Mary is so weird.

Heather stops by Whitney’s room before she heads out to visit her sister. Whitney is stunned and hurt that Lisa and Heather were laughing in Mary’s room after all that was said after Mary went to her room. Heather said that she was asleep, and then Mary and Lisa barged into Heather’s room to bring her a Louis Vuitton gift. Shoes for all! Shoes for all! Did Lisa and Heather get used shoes from Mary’s closet, too? Whitney was hurt that Lisa threw her under the bus with Jen. And who’s going to tell Meredith that Lisa is now Mary’s best friend?

Heather meets with her sister, Nancy, and her sister’s husband of 21 years, Mike. Nancy was ostracized from their family when she chose to marry a man outside the Mormon faith and when she left the church. Heather seems sincere about making amends for her self-righteous, judgmental past since their father passed. It’s mentioned that Nancy has had multiple sclerosis for quite some time. Heather is sad and Nancy is mad at what time they lost. Both realize that they were in their own worlds, jealous of each other. They both plan to figure it out.

Meredith booked a jet for the ride home, so everyone is back at the Vail house, packing. Lisa and Jennie check on Meredith. Meredith “deeply, deeply regrets” saying anything to Whitney about Cameron. And then, the large group gathering happens before leaving Vail. Meredith starts out with therapy talk, resolving things, and then apologizing to Mary for telling Whitney about Cameron. Whitney reminds everyone that Lisa brought Cameron to the event. Cameron told Meredith. Meredith told Whitney. Lisa comes in hot that Whitney is making it seem that Lisa was plotting to get this story out.

As Mary sits down with the group after the prior evening, and Heather recounts the middle-of-the-night-bed-jumping, she says that Mary gave her a gift. And Mary says, “That isn’t anyone’s business.” Then they discover that everyone received a gift except for Whitney. Dollar amounts flash onscreen for what gifts were given. Again, Mary says it’s nobody’s business whether or when she gives a gift. At least we know that Heather got a bag and not recycled shoes. Whitney’s hurt.

Whitney says, “It wasn’t me just singling you out, Mary. We’re trying to piece together…” and then Heather tries to jump in. Mary goes off on Heather for making any comparison at all between Mary and Jen and what the allegations are about each. When Mary calls out Heather for drinking too much, Heather says in her production interview that Mary has been horrible to a lot of people, and no one wants to deal with “her crazy.”

Heather walks off because no one is saying what they think about Mary because they are afraid of her. Heather can’t wrap her head around Lisa talking about Mary and then acting like besties with Mary. Then Whitney walks off to find Heather. Whitney and Heather make plans to leave and book a flight, not fly home on the private jet. Neither can deal with Lisa’s two-faced behavior nor Mary. Whitney says that no one is “copping up to what they really say and do and think and feel.” Then Meredith denies being two-faced.

When Jennie tries to bring up the alleged stories, Mary goes into full preacher mode—standing, pointing, cadence, the whole thing. Mary goes on a rant, calls Heather chubby, and is upset that anyone would compare her to Jen. Then she calls Jen a thug and heartless and makes some reference to “Mexican people who make all these drugs?” Again. Weird.

Meredith would have been better off staying in that Vail bathtub alone for a week instead of inviting these women along. As Meredith, Lisa, Mary, and Jennie head to the private jet, Heather and Whitney are booking a commercial flight home.

The preview of what’s to come in future episodes shows Jen with the group (minus Mary and Meredith). It appears that Jen physically attacks Lisa. They do have some fun times, but more drama is on the way when Mary sits down with Jen, Mary sits down with Meredith, and Lisa turns on Meredith. Then Jen has one of her super-fits, wondering where her friends are, while she sits with Coach Sharrieff Shah Sr. All of this makes cater-gate and bringing on a sister wife seem so lame. From the looks of it, the husbands won’t be meeting up for drinks any time soon.