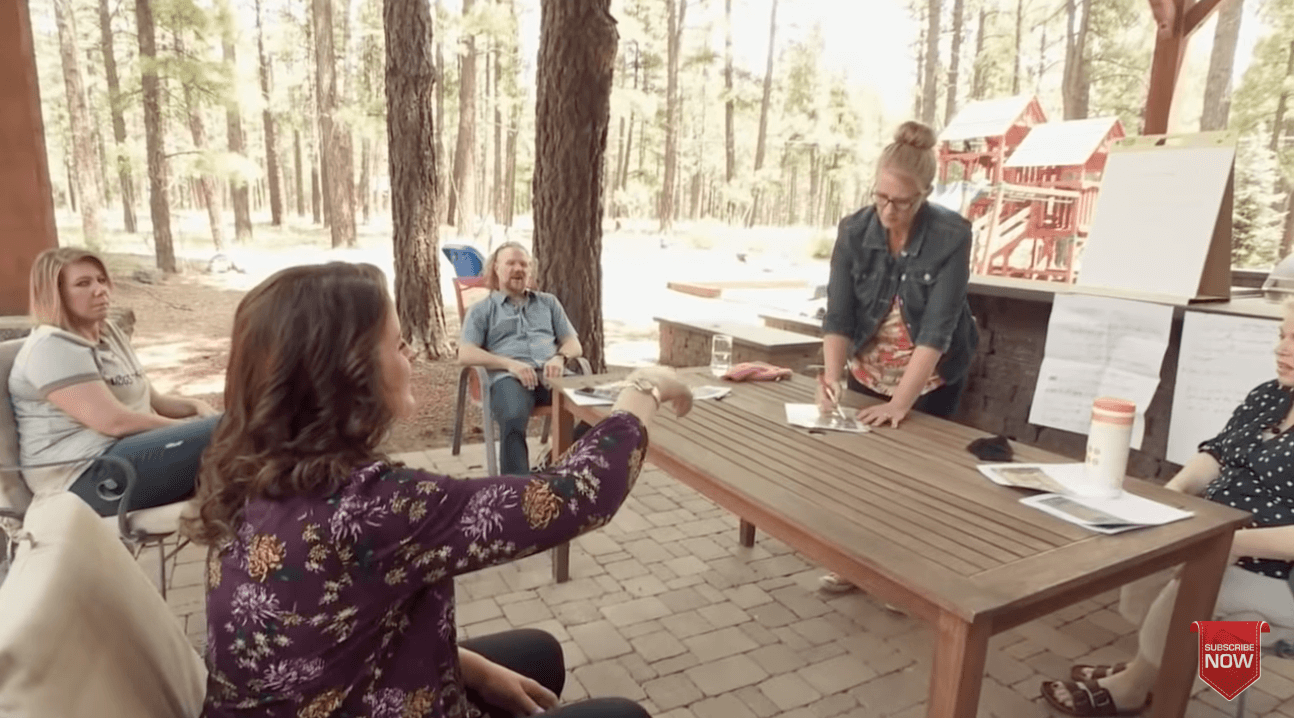 This episode on Sister Wives has many tears and much heartbreak. Even after a successfully distant family gathering at the firepits, conflict continues about family Covid restrictions, Ysabel Brown’s surgery, and subdivision of the property among the wives.

As the wives gather at Meri Brown’s home to discuss the lots on the Coyote Pass property, they are attempting to finalize who owns which section. Has anyone thought that perhaps the property is already divided and deeded in a particular way? Kody Brown and four wives likely wouldn’t have purchased a big parcel as a group of five, would they? Remember with Kody’s one-big-house plan when he said that they had a challenge of how to build a house that looked like a multiple dwelling with too many kitchens? Some limitations and restrictions for parcels must already exist? Something about this seems off.

Christine Brown is already faking it. Janelle Brown has the “safe conversation rules.” It already sounds like SO MUCH FUN! And Kody calls it “a goat rodeo.” One major consideration is the inheritance of the lots. So, if each wife has a property and that property goes to their biological children or adopted children, where does Kody’s property go?

Janelle wants either lot 4 or lot 5 to grow crops in greenhouses. Robyn Brown doesn’t want to go next in choosing. Neither does Christine. And Kody says, “I struggle to understand the abyss of women’s minds.” Shocker. Robyn doesn’t want trees and doesn’t want the pond, so she’s ok with lot 4 or lot 5. Meri says she wants lot 2 because it’s small. Christine is good with lot 3, although she has said for a while, she wants the hill and the view of lot 4. At this point, Christine is just phoning-it-in. As the women try to laugh and lighten the mood, Kody is solemn.

Kody makes it sound like he’s stuck with lot 1, even though it was his idea to have his own lot with a family gathering place and the pond. One thing this family never seems to figure out is that Kody’s mood is the pivotal piece to every conversation. Someone needs to take his temperature, determine where his head is, and then have the “Kody is ready for conversation rules.” Kody is now claiming that lot 1 isn’t a sellable asset if he wants out. The wives are so happy now that the lots are decided. And Kody is still pouting. And he says in his production interview that he’s concerned some wives have their fingers crossed behind their backs.

Everyone gathers in person with masks for an announcement about the property, but that’s a ruse by Christine for another announcement. Christine unveils the TV screen with Mykelti Padron and Tony Padron. The special announcement is that they are having a baby, due at the end of March. All the moms are excited. They don’t know if it’s a boy or girl yet and they have chosen names—either Avalon or Antonio.

Kody meets Christine at the lot she chose. Kody is trying to gauge her level of buy-in. Kody opens the pickup truck bed to help her see the view from her deck. And Kody wants to talk again about Utah. He says he was giddy about moving to Utah when they talked alone a while ago, but then, Christine felt betrayed when Kody didn’t support her with his other wives. Kody apologizes for not supporting her. But Christine isn’t feeling it and doesn’t believe he’s sorry. Kody doesn’t want to tally the votes for or against the move and talk to Christine about it, so he’s intentionally vague about which wife or wives want to stay or go (and none want to go).

Christine wants to know if the move to Utah is still on the table. And Kody says, no it’s not really. Kody doesn’t want Christine to feel trapped by the decisions of the rest of the family. Kody admits to her, “I don’t know how to work this out.” Christine is shutting down and won’t talk about it. But she does admit she’s not ready to build her home yet in Flagstaff.

Kody is trying to prod more, but Christine breaks down and tells Kody that he’s not safe and it’s not a safe conversation. She walks off crying. Kody can’t figure out what he said that was unsafe. He doesn’t understand or know that Christine doesn’t even think that Kody is her friend right now.

The next day, Kody and the wives gather at Christine’s house to discuss Ysabel’s surgery. They gather outside with social distancing to go over the plan. Christine attempts to explain the surgery to the moms. When it’s over, Ysabel will be taller and she’s looking forward to being without pain. The plan is for her to be in intensive care, then to stay in New Jersey for a minimum of five days. They will be gone for a month and then two weeks of quarantine before and after, so about eight weeks without Kody seeing his and Christine’s youngest daughters. Kody is upset that Christine and the girls are traveling so much. Kody admits to not knowing about the extent of Ysabel’s pain.

Kody says goodbye to Ysabel. He says he’s sorry he can’t go. She says, it’s ok to him, but in her production interview, she says it’s not ok. Ysabel wants him to be there and is upset that he won’t drop everything for her. Ysabel says, “I think his priorities are a little screwed up.” Kody doesn’t want her to be bitter in the future.

Kody is signing release forms and paperwork for the surgery. Robyn talks about how Kody is struggling because some wives (Christine and Janelle) won’t follow his rules, so he can’t see them as much while still doing what he believes he should do to protect the rest of the family. Robyn says that she is sticking to Kody’s rules, and that’s why she’s the wife who is seeing him the most.

Kody is struggling with distance and lack of respect. He breaks down over the awkwardness and pain of the floundering relationship with Christine and the regret he feels over Ysabel, Covid, and the disparity of behavior during Covid. Kody sees this turmoil as an indicator that the family is not functional. He’s sad.

Next time, Meri and Janelle revisit some wounds from the past, but it doesn’t go well when Janelle tells Meri that they don’t talk about things because Meri gets angry.