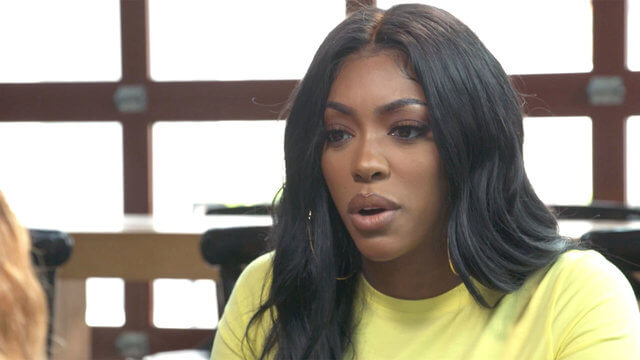 On a brand-new episode of Porsha’s Family Matters, we’re thrown back into this mess that Porsha calls “Real Love.” *eye roll* Porsha meets Lauren at a local Kale restaurant. Firm on not participating in birthday shots, Lauren and Porsha prepare for their upcoming cookout. Lauren informs Porsha that she told Dennis he can bring a date if he comes Sunday. Porsha instantly has an issue with Dennis bringing someone to the cookout. Lauren blurts out that Dennis thinks Porsha’s still in love with him. Of course, Porsha isn’t admitting to anything and continues to explain how much she loves Simon. Sensing her sister’s anxiety rising, Lauren thinks everyone should go on a retreat. Porsha makes a statement about a man named Nate, and the two get into a brief argument.

Apparently, Lauren’s been in an on-and-off-again relationship with this man Nate, and Lauren instantly breaks down when Porsha pushes further. Porsha consoles her sister and Lauren doesn’t want to talk about it anymore. On the other side of town, Dennis and his mom are taking Pilar out on a shopping spree. While Pilar’s looking for toys, Dennis tells his mom about social media overreacting to Porsha’s birthday post. Dennis admits to trolling Porsha and his mom asks Dennis if Porsha really loves Dennis. Dennis’s mother never liked Porsha, and we’re reminded of the many clashes the ladies experienced over the years. Dennis’s mom makes it clear that Porsha isn’t going to control things and Pilar begins to cry as her dad checks out at the register.

It’s the day of Porsha’s Birthday BBQ, and the guests are arriving as the finishing touches are being applied. Ms. Darlene compliments the others on their attire while feeling a bit out of place. Simon comes in all mysterious and begins the round to introduce himself to her family. Lauren goes upstairs to help Porsha get dressed and to give Porsha a gift. Lauren is now focusing on yoga and meditation and has gifted Porsha with free sessions to unlock her feminine power. Lena, who is Porsha’s new Spiritual Counselor, seems pleased with the chance to go on a retreat. Londi also is going through a rough time and Lauren wants to give them all a safe space to express themselves. One of the aunties asks Simon if he’s going to keep this wife, and Porsha comes down in the nick of time to save her man.

In some corny attire, Porsha is faking the funk as she takes pictures with the family. Clearly nervous, Porsha wants everything to go right but everyone’s still getting to know this man. Everyone grabs their food buffet style and Lauren checks in with Londie. Lauren gives Londi the update on her and Dennis’s meeting and acknowledges that she’s not afraid of Porsha. Lauren tells Londi about giving Dennis permission to bring a date. Londi calls Lauren messy, but Lauren doesn’t care. At the dinner table, the aunties begin grilling Simon and Porsha gives us a rundown of her family members. Ms. Diane asks a question that prompts Porsha to admit to becoming Simon’s fourth wife. Grandma gasps and said, “Oh my Lord!” Welp! There’s no hiding this awkwardness!

Simon explains the difference in where he is now, versus where his mind was in his previous relationships. The family seems to accept his answers and suddenly Dennis and Mama Gina arrive. Porsha awkwardly giggles and greets Dennis with a hug. Simon is watching her every move but remaining cool for appearances. Dennis hands Pilar off to Porsha and gives Simon a hug before Simon hugs Dennis’s mom. After the greetings, Ms. Ester calls out Dennis and makes a comment about potentially meeting his new girlfriend. Playing it off, Dennis would rather have Pilar as a date any day. Storm compliments Porsha and Simon’s relationship and Lauren begins to feel bad for Dennis. Grandma begins to talk about how much she loves Porsha and Ms. Diane starts crying and complimenting the blended family that Porsha’s attempting. With a lot of emotions flying around, Dennis needs a break from the madness.

Mama Gina makes a speech and states that they should remember who’s important, which is Pilar. Not trying to put anyone down, Porsha’s grandma brings up Dennis’s infidelity and compared Dennis to a playboy. Mama Gina didn’t like that comment and goes in to defend her son. Thinking grandma was out of line, Mama Gina believes Simon being married is worst than anything Dennis ever did. Breaking the tension, Dennis gets on the mic, thanks everyone for coming over, and gives a toast. Porsha’s at work on Dish Nation while Lauren’s finishing up on their upcoming retreat. As Porsha packs, Lauren wants to know what she wants to interpret this weekend, and producers ask if this is Porsha’s first time being out alone with Dennis since their breakup. Porsha wants to impress Dennis but doesn’t want to get caught lurking. She covers her feelings with co-parenting responsibilities, but we all see the truth.

Walking seductively into the restaurant, Porsha hesitates when Dennis doesn’t initially get up to greet her with a hug. After Porsha forces a hug from Dennis, Dennis begins the conversation talking about P.J. Porsha’s upset Dennis hadn’t asked about her and Simon, but Dennis has other things he wants to talk about. Giving her the business about how he feels about Simon and their relationship, Porsha attempts to silence and change Dennis’s timeline. Explaining the situation about Christmas and the engagement ring, Porsha finally brings up her hurt surrounding Dennis’s infidelity. Explaining how she’s lost trust in Dennis, Dennis seems to be surprised at Porsha’s emotions. Porsha brings up the comment Dennis made to Lauren, and Dennis isn’t backing down! Dennis admits to still loving Porsha and she’s gaslighting him! Porsha continues changing the conversation, but we all know this isn’t over with. The check comes and Dennis asks about his Versace robe.

Porsha sees this as a setback, now that she knows Dennis is on a mission to get her back. While waiting for their rides outside, the two continue to flirt as a woman ping on Dennis’s phone. Of course, Porsha notices and immediately calls Simon when she gets in the car. Porsha sugarcoats the dinner and refuses to acknowledge the bomb Dennis dropped on her. Simon’s confident the two can get through anything, but Porsha negated to tell Simon about what Dennis just revealed. The next day, Lauren meets with her Spiritual Counselor and wants to plan the epic retreat for the women she loves. Lauren wants to show off her healing capabilities and wants to genuinely help people. Porsha, Storm, and another aunty arrive to learn about their upcoming practice. Lena asks what the ladies’ intentions are at the moment, and the group shares some deep wants. When it’s Porsha’s turn, she manages to cry, and the Shaman tells Porsha she has a big heart. *eye roll*

Lena begins the meditation practice and calls on the ancestors, and immediately the aunty has an issue with it. Bringing up demons in her confessional, it’s annoying that older women can’t try something new without bringing the devil into it. During the meditation, this old lady actually started singing, thinking she was saving everyone in the process, SMH. Lauren wants to bring Mama Gina, but Porsha is still upset at how his mom acted at the BBQ. Porsha tells Lauren she’ll sleep on it, so maybe there’s hope. Wanting to clear the air, Porsha sets up a meeting with Mama Gina to talk. Breaking the ice with a familiar shirt Mama Gina bought Porsha once upon a time, it’s clear Mama Gina isn’t here for Porsha’s antics. After some small talk, things get heated when Porsha brings up Pilar. After the food arrives, Mama Gina inquires about Porsha’s grandmother’s attitude.

Mama Gina feels like the conversation was brought up to defend Dennis, but Porsha isn’t focused on Dennis’s pain. Explaining to Ms. Gina that she’s deflecting, Porsha doesn’t have the patience for Mama Gina’s energy. Demanding an apology after Porsha uses a curse word, Mama Gina seems to calm down after Porsha changes her tone. Porsha asks Mama Gina not to talk to her grandmother like that again, but Mama Gina states she felt grandma was rude! Mama Gina calls Porsha a cheater and reveals Ms. Diane revealed to her — that Porsha cheated on Dennis! Whew, wee! Looks like some fresh tea is brewing. Continuing to push for a cordial relationship, Porsha invites Mama Gina to the family retreat, and Mama Gina agrees to go. This craziness is just getting started, and make sure to come back next week, on a new Porsha’s Family Matters!