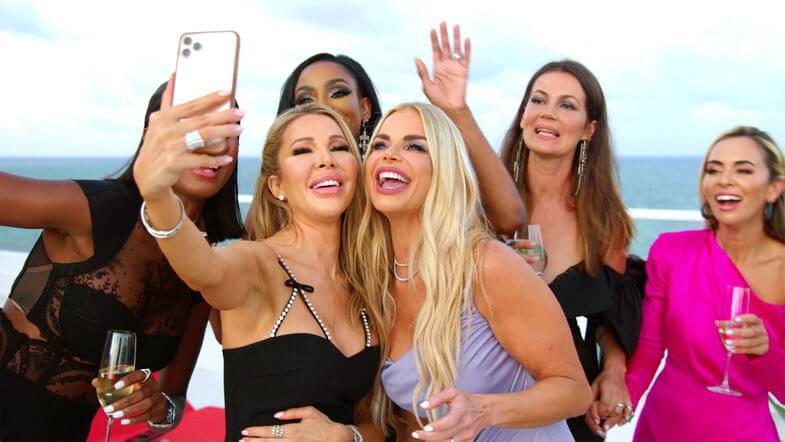 The Real Housewives of Miami is returning to the airwaves after nearly a decade—and it looks like the Florida ladies are in for a bumpy ride.

The Season 4 trailer for the Peacock show dropped on Tuesday—and features both new and familiar faces. Alexia Echevarria, Lisa Hochstein, and Larsa Pippen will return to the cast and be joined by newbies, Guerdy Abraira, Dr. Nicole Martin and Julia Lemigova. Adriana De Moura and Marysol Patton will return as “friends” alongside newcomer, Kiki Barth.

A press release states that the new season is “set against the backdrop of one of the most exciting and diverse cities in the world, The Real Housewives of Miami will take viewers on a wild ride of red-hot fun and friendship – with of course, no drama to spare. After a year of unprecedented times in a pandemic, the Miami social scene is burning up.”

The trailer teases a dramatic dinner party during which Adriana, 56, labels Larsa, 47, a Kim Kardashian wannabe.

“You left this group of women, come back with a butt as big as Kim Kardashian’s, trying to become the new Kim Kardashian, which you’re never going to be,” Adriana yells at her co-star.

Larsa was an original RHOM cast member but exited the show after Season 1. Larsa and Kim were once fast friends but cut ties in 2020 after a falling out. Some fans guessed that Larsa’s romantic history with Khloe Kardashian’s intermittent boyfriend, Tristan Thompson, led to the bestie breakup, but Larsa pinned the blame on Kim’s estranged husband, Kanye West.

“He talks so much about me being this and that and this and that,” Larsa commented about the musician during a podcast appearance, a year ago. “I just feel like Kanye was in a place where he really didn’t trust anyone with Kim.”

The trailer also features Larsa’s co-stars shading her claim that she rakes in $10k a day on her risqué OnlyFans account.

Marysol, 54, asks her fellow cast members who in the group they trust the least, in the Peacock preview. Nicole nudges Marysol to go first, who responds—“I think I trust Nicole the least.”

“Marysol, you are bored in your life!” the anesthesiologist replies.

Julia, 49, the first LGBTQIA+ “Housewife” is married to tennis great, Martina Navratilova, who also makes an appearance in the trailer.

The preview reveals that Alexia, 54, lost her mother to COVID-19 on the same day that she was scheduled to wed her fiancé, Todd Nepola.

“I was on the road to marry the man of my dreams when I had to stop everything as my mother became ill,” Alexia wrote via Instagram in August. “What was supposed to be the happiest day of my life today has turned out to be the saddest.”

The funeral was seemingly filmed for the series, as several of the ladies were seen in the trailer wearing black.

Lisa, 39, experiences a “startling revelation” about her husband’s loyalty, according to the press release. Viewers will see Nicole navigate a tense relationship with her father for the sake of her son, Greyson.

“The Real Housewives of Miami” premieres Thursday, December 16, on Peacock.