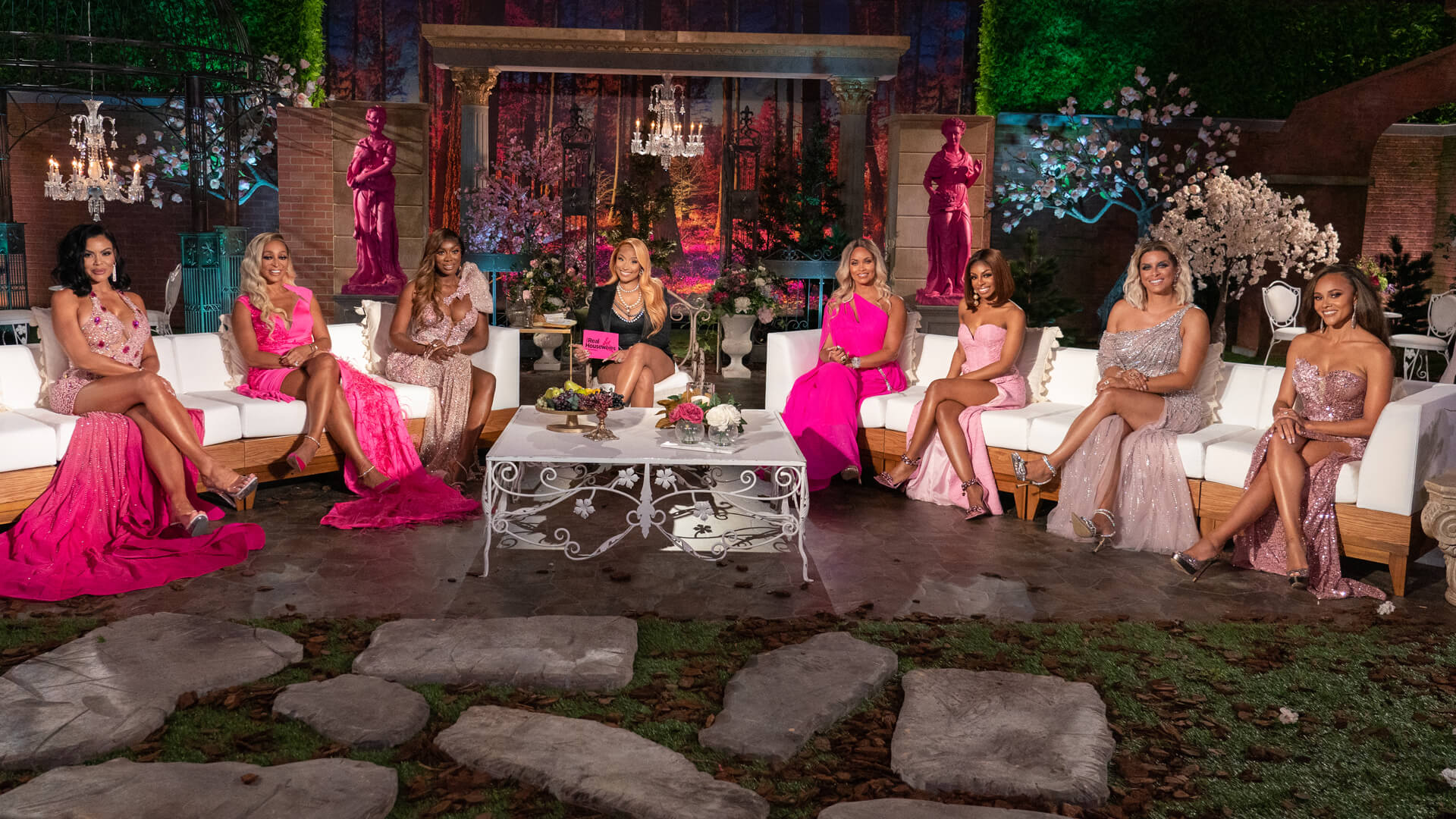 Ending off season six with a bang, Nicki Minaj has decided to ask the ladies a few questions of her own. Starting off, Nicki had a question and shade for Ashley Darby. It’s no doubt that Ashley played sidekick to Gizelle Bryant’s shenanigans, but Nicki is going straight for the jugular! Ashley plays it off nicely, but I can tell Nicki’s boldness threw her off. Ashley claims she received different stories during the show, but a flashback reminds us that Ashley and Gizelle kept coming at Wendy. Wendy didn’t think Ashley was malicious, but Gizelle is the reason for all her anger. Nicki checks Candiace Dillard-Bassett when she attempts to shade Ashley, and Robyn comes in for Ashley’s defense. Switching over to Robyn Dixon, Nicki wants to know if she’s received more sex from Juan this season.

Using the kids being home as an excuse, Robyn admits to being creative in the bedroom and Juan is happy with her doing her thing. Nicki does bring up the sentence where Robyn said, “Are we mad at Ashley,” and Robyn provides a lackluster excuse of a reason. Wendy Osefo chimes in and goes back in forth with Robyn and won’t give Robyn the room to speak. Many viewers wonder whether the green-eyed bandits are really scissor sisters, but the two women laugh it off as gossip. The two did admit to sharing a bed together during their trip to Andy’s baby shower and Ashley jokes about being jealous. The conversation of Juan and Michael comes up and Ashley thinks they have a friendly attraction, but Robyn is cool with the fact that Michael has a crush on Juan. Ashley believes Nicki is changing the context of the situation, but we all know it’s strange LOL.

Nicki gives Juan props for being so mature when it comes to Michael’s flirtation and Robyn reveals Juan has other friends in the LGBTQ+ community. Guess that’s why he doesn’t pay Michael’s advances any mind. Gizelle received props for the scenes she shot with her daughters and how awesome she is as a mother. Nicki also points out that Gizelle’s looks have changed a bit and wonders why Ray Huger’s comment rubbed her the wrong way. Nicki was able to uncover that Gizelle was hurt and felt insecure at the time. Gizelle’s comment on Karen Huger’s age was discussed and Gizelle’s defense is she didn’t know her real age for a long time.

The group admits Karen looked older in season one than she does today, and Karen includes us in on her beauty secrets. Still hot on Gizelle’s tail, Nicki inquires about why Gizelle and Jamal Bryant didn’t try again before the cameras started rolling. Gizelle claims she felt more financially secured being on the show and gives us a rundown of how she helped Jamal build his church into what it is today. During the break, Wendy got caught trying to read the cards and Wendy was unapologetic. Karen believes she proved her point to Gizelle when she shaded her during Wendy’s Nude Interlube. Switching gears, Nicki loved the scenes with Mia Thornton and her mother and Nicki dives deep into Mia’s emotional state. Preaching healing and honesty, Nicki wants them to communicate and lets Mia know she’s rooting for her.

Speaking of Mia’s plastic surgery, Nicki wants to know if the surgery increases the climax or if she’s just into freaky stuff. Mia answered as politically correct as possible and Nicki wants to know if the women would pick their same men if they had one-hundred million in the bank. Ashley listed the things she loves about Michael and Karen stated she wouldn’t be able to live without Ray. Mia doesn’t stand by her steak and strip club comments and apologize for her insensitive comments. Mia thinks chicken wings are what makes a strip club and the group laugh at her stupidity. Candiace keeps shading Mia, but Nicki checked her one more time, and Candiace fell back. Nicki wanted to know if Mia feels good when other men find her attractive, and Wendy and Mia get into another war of words.

Nicki doesn’t understand Wendy’s candle line business and the many changes that happened during the season. Wendy snapped at Gizelle when she tried to chime in, and Wendy dismisses the idea that Eddie Osefo was following some big booty models. Nicki wonders if Wendy got her butt done because of the many models her husband followed. Wendy, of course, won’t give life to those accusations and plays it off without breaking a sweat. Nicki comes to Candiace about Ms. Dorothy trying to destroy her marriage. Candiace reveals she cursed her mama out and Nicki is upset that Ms. Dorothy humiliated Chris Bassett like that. Ms. Dorothy admits to just saying stuff for TV and Nicki pushes boundaries to Candiace. Gizelle admits they’ve all said the same thing to Candiace, but they can’t make her check her mother.

Nicki does like the song “Drive Back” and asks how successful she thought the song would be. Mia says it was a negative two and Karen gives Candiace a five. Candiace lets Nicki knows she is on the R&B Billboard charts and Nicki quizzes Candiace on her music sales. Candiace had to pull up the numbers on her phone and Nicki isn’t sold. Candiace shows us a snippet of her new video and the ladies seem to like it. Candiace thinks her vocal abilities are her greatest strength, and Nicki wants to hear Candiace sing acapella. Candiace clams up so tight! It’s clear sis is nervous to sing and doesn’t want to embarrass herself on TV… again. Andy is loving this stuff backstage and Candiace asks for a snap from those on set. Candiace actually sings acapella and doesn’t do too bad for the middle range. The group gives Candiace applause and Mia runs to use the bathroom. During the break, Chris voiced his frustration at Nicki’s line of questioning and Andy reassures him that everything is great! Everyone gives Candiace her props and everyone toast with Nicki and Andy to another wonderful season of The Real Housewives of Potomac!