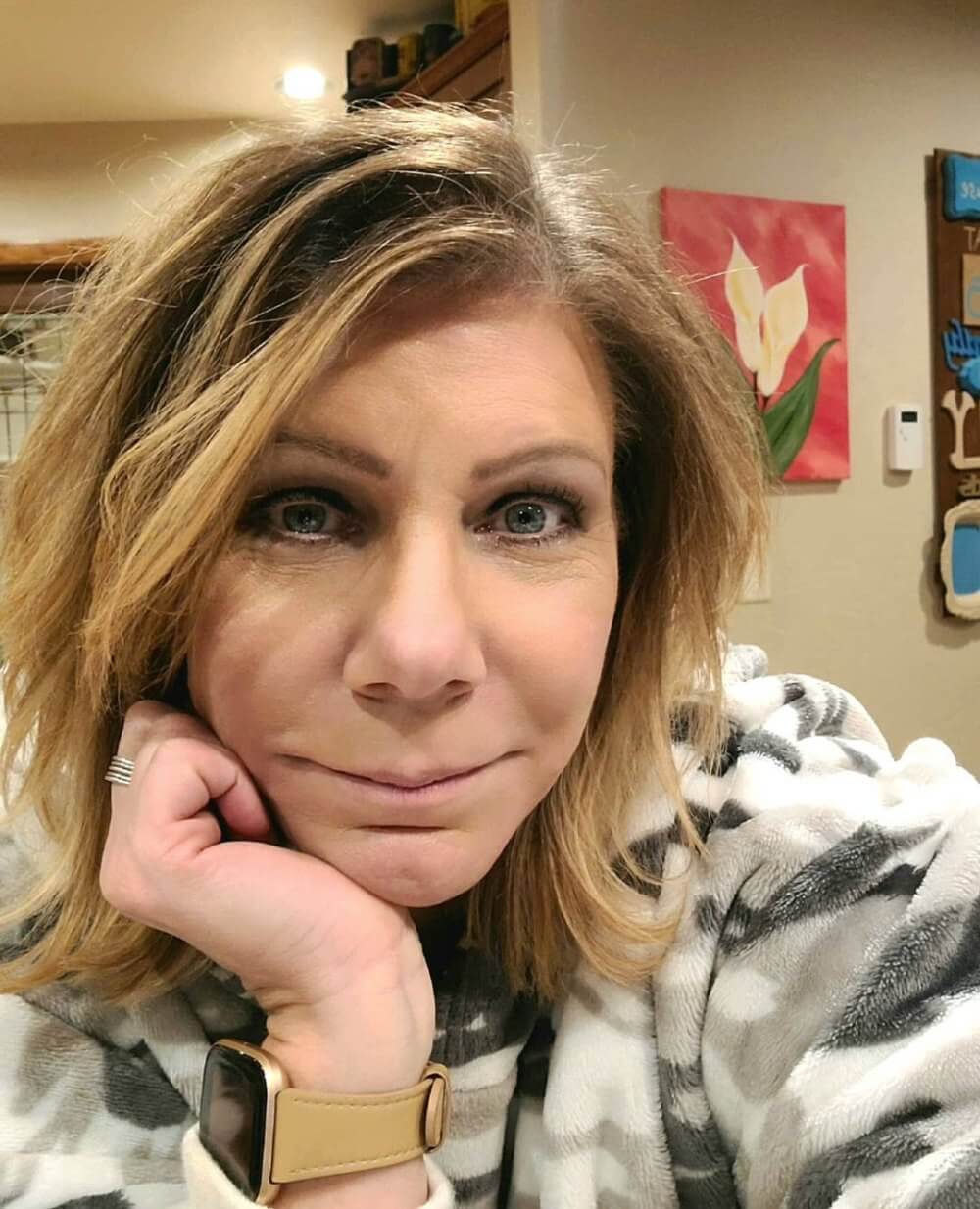 This week’s episode of Sister Wives filmed in November of 2020, Kody Brown is still simmering in a dumpster fire mostly of his own making. Meri Brown is still making unwanted overtures to reignite her marriage to Kody. Janelle Brown and Christine Brown are both, in Kody’s words, “princesses giving ultimatums.” Covid roars on, but no one seems to be making any effort to get together outside and distanced. They have no overall family rules about Covid exposure and protecting their pod(s). And Robyn Brown states her frustration with all the talk about where-are-we-moving-next.

Kody Brown is working out in Janelle’s garage, and Janelle reminds him that Hunter Brown is leaving the next day for school, so she wants to have a cookout on the Coyote Pass property. It’s been five months of no gatherings. Kody’s idea is to have a fire pit for each of the three wives with children at the party, and Meri can float around, socially distanced. Is it just me, or does Kody always slight Meri? She doesn’t even get her own fire pit? Then each mom will decide about masks or no masks. Kody thinks it will be good to get together, but also stressful to keep everyone adhered to the rules. That seems like his everyday life, Covid or not, right?

Meri is so excited that Kody is coming over to talk to her that she doesn’t even care why. Meri defends why she stays with Kody, despite his treatment of her. She says, “Because it’s my family. Because I have a confirmation from God that this is where I am meant to be. This is a very conscious choice that I am making.” Kody first brings up moving back to Utah. Kody finally owns up to Meri that he encouraged Christine to approach the family by telling her that HE wanted to move back to Utah, also.

Kody then admits in his production interview that he thought about the move to Utah more between the time when Christine talked about it with him alone and when she brought it up to the group of wives. But Kody didn’t warn Christine that he had a change of heart. Kody let Christine walk away from that day feeling completely unsupported and rejected. Meri is realizing now why Christine was so upset. Kody wasn’t honest with Christine about moving before the meeting, so Christine was blindsided. Meri says, “Nobody likes it when Kody Brown goes jack wagon.”

Kody is trying to convince Meri that he wants to stay in Flagstaff, but then describes it as “sort of stuck here.” Kody says that maybe it’s a midlife crisis, but in plural marriage, it feels like other people are in charge of your life. He must not have any long-term memory of why the family uprooted and moved to Flagstaff. Moving was HIS idea. Moving seems to always be his idea. Each wife is shown in production interviews talking about the family being run by committee. Sometimes you win. Sometimes you lose, but you go with decisions out of a commitment to the family.

Meri tells Kody that her gut instinct is “oh hell no” to moving back to Utah. In making sure that his wives are sure about staying in Flagstaff, he realizes that everyone except Christine is sure. Meri can relate to Christine’s dark place in her marriage to Kody. Meri thinks it’s less about the city or state where they live and more about how they are all more comfortable now living separate and doing what they want to do independent of the rest of the family. Meri wants the wives to have a balance of being together and being separate. Meri is agreeing with what Janelle was saying all last season, that the wives/households got selfish.

So now, rather than listen to how the wives and children feel separated and can’t figure it out, Kody starts to churn on the idea that maybe each wife should go live where they want, even if that’s out-of-state. So rather than lead the family back together, he’s looking for a way to appease the wives, but they don’t necessarily want that arrangement either. Kody seeks friend-zoned-Meri’s advice, but he won’t likely listen to her, either. He doesn’t seem to communicate well with his wives or children. Remember months ago when Mariah Brown and Audrey Kriss moved from Chicago to Flagstaff, quarantined for about 10 days, and then moved to Parawan to the B&B, and he never visited them? Is he connecting with his children during the pandemic, or has he completely lost focus? Janelle does say that he calls the kids.

Gabriel Brown is glad to be back on the college campus again. Does anyone wonder if Dayton Brown is still attending college at home? Janelle tries to talk to Gabe about seeing his girlfriend, the increased exposure on campus, and how Gabe might want to stay at his apartment more, not coming into Janelle’s home for a few weeks to lessen the family’s Covid exposure. Gabe is frustrated that he’s trying to stay isolated, but that he doesn’t see Kody making an effort to figure out how they can all be a family again. Gabe and Garrison Brown are angry that they have done what’s asked of them, Covid cases are down, and they still don’t see their dad. And Gabe says, “Theoretically, the only way to actually be able see dad is to get Covid.”

Gabe goes on to say, “If I end up getting it and then I recover, if that doesn’t change the game, then this was never about Covid at all in the first place.” Gabe is wanting more than, “I can’t see anyone. Sorry. Bye.” that he’s getting from Kody. Gabe asks the million-dollar question, “Is it Robyn or is it dad?” Janelle thinks it’s Kody who is making the Covid rules that keep them apart.

Kody and Robyn are discussing whether or not Solomon Brown and Ariella Mae Brown can come to the multi-firepit-gathering at Coyote Pass. Robyn is hesitant. Robyn thinks it might be really hard for Solomon, Ariella, and Truely Brown to see each other but keep distant. Kody sees this as shining a spotlight on the lack of trust in the family. Kody doesn’t trust the other wives (and children) to protect Solomon (who had RSV as a little boy) and Truely (who had kidney failure as a little girl). Meri has been quarantining, so Meri could help with the little kids. Robyn is worried that the other wives might perceive favoritism to Meri for “conforming” to Kody’s rules.

Kody wants the wives and adult children to stay home, not travel, and not go out, and then they can all gather. But Janelle and Christine are not willing to enforce it with their children. Robyn thinks that each wife should be able to choose, and some chose freedom over being together as a family. Robyn seems to want Kody to differentiate Covid rules for the family from their family culture.

Kody is building fire pits with Garrison, Gabe, and Hunter. Janelle reminds her group to remain distant so that they can do this again. Christine rolls up with her daughters. And Robyn is hopeful that they can all respect Kody’s rules and do it again, also. Meri is excited to see everyone, and air hugs the little kids. Christine, right away notices that there are three fire pits, three tables, and four wives. Christine announces that Ysabel Brown is scheduled for surgery in about six weeks. Ysabel wants to get a tattoo to cover her scar, and even though Kody is opposed to tattoos, Christine says yes.

This fire pit situation is confusing. Kody was fairly distant from Janelle’s boys while building it. Then Kody is standing right behind Gwendlyn Brown and Christine’s kids while talking about the surgery. Then he takes his hotdogs to go back to sit at Janelle’s table. Christine admits in her production interview that she and her kids and Janelle and her kids have hung out. It seems like Kody really is correct not to trust that Janelle and Christine have been following his rules.

Robyn is frustrated that no one seems to be helping her keep Ariella and Solomon distanced from Truely. Kody’s chopping wood, eating, and not paying attention. Solomon is crying because he’s in trouble for being too close to Truely while Kody gets within a foot’s distance of Meri to hand her a smore. Then the can of worms opens about what’s required to gather at Christmas. Kody is asking for a two-week quarantine from everyone.

Janelle and Christine want to shut down any conversation about how serious or not serious Covid is. Kody is hurt that he wants to do the right thing, but he’s been marginalized to the point where he’s not the head of his household in a couple of homes. Then Kody is hugging Ariella. News outlets are reporting that Kody actually did contract Covid at some point between filming in November 2020 and a video posted in November of 2021. It’s not clear if this season of the show will capture any infections in the family.

Next time on Sister Wives, Ysabel prepares to have surgery without her dad, but doesn’t understand why her dad won’t be there for her. The wives, yet again, meet to discuss dividing the lots on Coyote Pass. And Christine still appears to think there’s an option to move to Utah as a family. This season of Sister Wives will likely have more of Christine’s heartbreak with each episode.