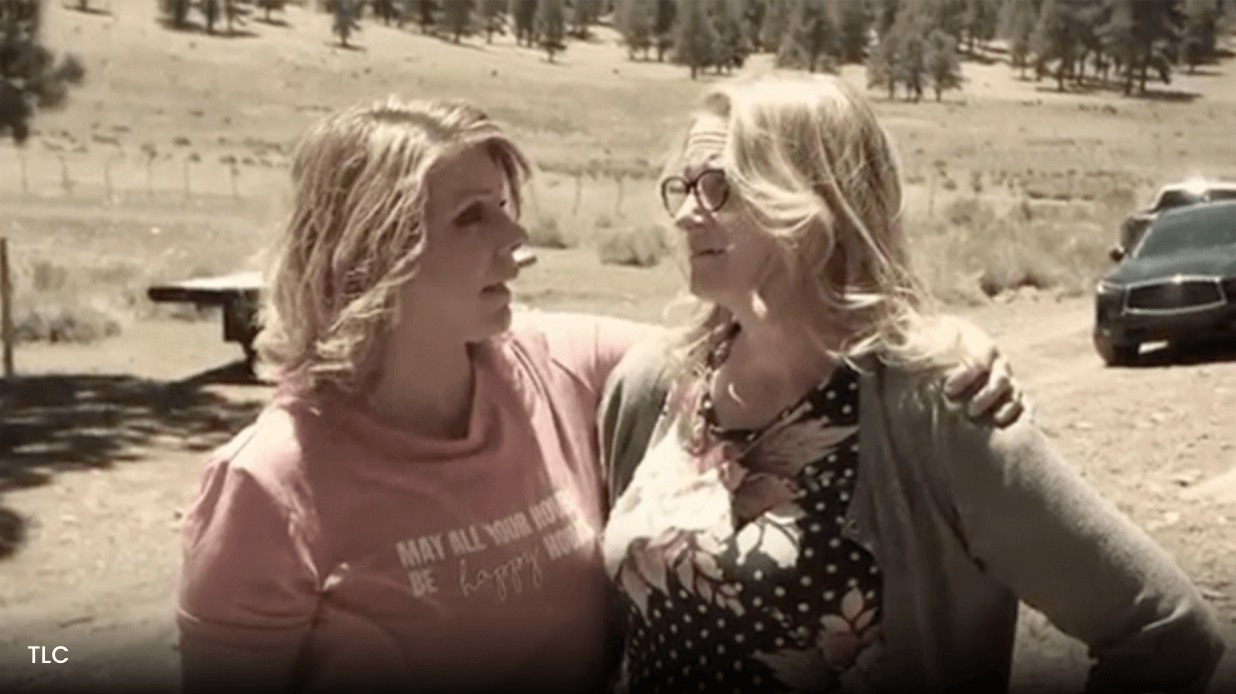 Season 16 of Sister Wives picks up as Kody Brown and his wives continue their “season of discontent” on the Coyote Pass property. We’re treated to a replay of last season’s cliffhanger, where Christine Brown proposes that they stop any plans to build and plan to move back to Utah. Janelle Brown says, “There’s nothing for me in Utah. Nothing.” Janelle feels whiplash from Christine’s announcement. Meri Brown doesn’t want to move back to a state that kicked her out.

As the finale of the season aired in April of 2021, Christine is surprised when Kody doesn’t advocate to move back. He seems to want to move back to Utah (to St. George), but he wanted them to do it years ago before they all decided to move to Flagstaff, Arizona. Kody doesn’t see it as realistic now to move to Utah after all they have invested in Flagstaff. Christine is upset, and Meri takes her hand to walk away to talk. Christine says, “Meri, I can’t do marriage with Kody anymore.” Meri tries to encourage Christine to not give up. Meri has been long-suffering, but Christine doesn’t want that. Last season ended with Christine saying that she doesn’t want what Meri has. “What I have here is not what I want right now.”

Christine appreciates what Meri is saying, but she also says, “Her relationship with Kody isn’t certainly one that I would want.” Robyn Brown understands that Christine is upset. Kody changes the subject and pushes his wives to figure out the property boundaries. For Christine, it’s not just about leaving, it’s about how hard it will be to stay. Robyn and Meri want to decide the property lines so that they can visualize what happens next. Christine is upset about so many aspects of her marriage — feeling unsupported, limited physical contact, and certainly Kody’s Covid restrictions that have caused his absence in her home.

Two weeks later, Kody travels wife-to-wife to figure out how everyone feels about moving or staying. As Kody is at Janelle’s house, they bond over gardening. Janelle says if someone wants to leave, they should deed their land to her and go. Kody says in his solo interview that he’s had three of the four wives threaten to leave him over a significant part of their marriages to him. Janelle really doesn’t want to vote again as a family about moving. They voted to go to Flagstaff, and she doesn’t want any second vote to move again. So, Janelle is a firm “no.”

All of the adults converge in Christine’s backyard to discuss Covid protocols for the family again. Janelle wants to know when they can be ok to gather again. Kody is blaming the mothers for not following his rules. Robyn wants to know why they would talk about Christmas right now (at the end of summer). Janelle says that Hunter Brown wants to come visit Robyn’s kids, but Robyn says Hunter has never asked to come over to sit outside and visit.

Kody goes Robyn’s house to ask her what she thinks about moving back to Utah. It’s weird that they meet in the backyard given that he lives with her almost 100 percent now. Robyn is frustrated that it’s even a discussion again. Robyn doesn’t want to be part of a transient family. Robyn wants to make it work in Flagstaff. Robyn says that even with the law change, the decriminalization of polygamy in Utah, people will treat them badly. Robyn doesn’t want to live in fear and have her children subjected to what she endured as a child of polygamist parents. Robyn thinks it’s unfair to the younger children. Robyn encourages Kody to find a better way to deal with Christine than saying to her, “majority rules.”

Kody asks the surveyor, Mike, to meet him at the property. The ladies go to the property again to talk about dividing the land so that they can “buy in” to the vision. Kody has a surprise (not a good idea, Kody), but he seems to enlist the help of the surveyor. Meri’s onto his plan right away to enlist Mike as a persuasive ally. The surprise is that Kody wants to divide the property into five lots instead of four so that he can have his own lot. Kody wants the lot with the pond to be his.

Meri doesn’t understand why it matters who owns the pond (Lot 1). Meri… rewind to when you had the top floor (and the indoor path) between Janelle’s rooms and Christine’s rooms in Lehi. Remember when you made the kids go outside instead of through your part of the house? THAT is why no one wants you to be in charge of the pond access. Robyn’s ok with Kody having a house for family gatherings. Janelle seems ok with it, but Christine says, “It’s stupid.”

Janelle wants to have greenhouses, so Kody wants Janelle on Lot 4 (4 acres without trees). Kody would put Robyn on Lot 5 (4 acres without trees). Kody wants Christine and Meri to be on Lots 2 and 3. Both lots are 2 acres with trees. Meri is concerned that where Christine originally wanted to build is not where Kody wants her to build. Christine’s original lot is now where Janelle’s greenhouses would be. Christine is trying to deal with all of the changes, but she wants the houses to be more of a priority rather than the greenhouses being the priority. Christine also envisioned that their houses would be close, like the cul-de-sac in Las Vegas.

The wives want to walk the property, look, measure, and try to visualize what changes Kody wants. Kody wishes that the family hadn’t “evolved toward anarchy.” He wants the wives to just decide. He doesn’t like being controlled, and he tries to not be controlling. But Kody is frustrated that every time a decision is made, he encounters resistance at every turn.

Mike, the surveyor, is concerned about where they can build due to the rocks. When Christine says that she likes Lot 3, Kody thinks that it’s a good sign. Christine says in her production interview, she is not excited about it. Christine is pretending. Kody is trying to divide the land equitably by value, not by size. Each wife will own their own lot.

This season on Sister Wives — Kody has more conflict with his wives over Covid protocols, land, building on the property, and whether or not they want to be a family. Robyn is defensive that the other ladies think that she’s making the rules, but the Covid rules are Kody’s rules. Kody says, “I don’t have a head wife in this family.” Christine doesn’t want to live on a property with her dysfunctional marriage, watching a more functional marriage outside her window. Christine and Kody recently split up, so this season will likely feature “the great unraveling” of their marriage.