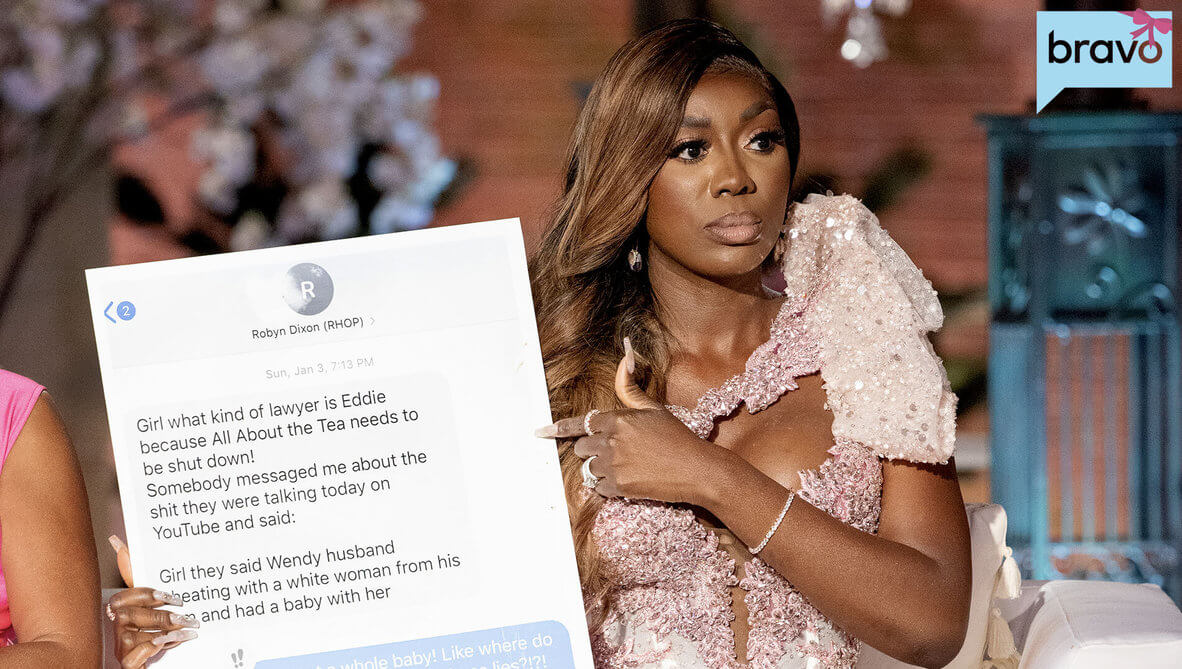 This week, on part three of The Real Housewives of Potomac reunion; we start with Wendy Osefo asking Gizelle Bryant if her tummy tuck kept Jamal Bryant! Gizelle states she had a tummy tuck after having twins, but Wendy isn’t trying to hear none of that! Mia Thornton attempts to shade Wendy, by asking if her kids were the reason, she got her butt done. We all saw that Wendy was flat as a board, so the plastic surgery definitely gave her a little more oomph, LOL. Andy questions Wendy and her fury on Gizelle and Robyn Dixon, although Ashley Darby brought the rumor to the group. Wendy wonders why Robyn didn’t stick up for Wendy (since they’re friends) and Robyn gaslights Wendy and says she thought there was a new rumor about Eddie Osefo. Robyn attempts to finish her point, but before she can Wendy pulls out a giant receipt of texts from Robyn!

On January 3rd, Robyn had texted Wendy about the rumors and therefore knew what Wendy was referring to during the Whiskey tasting event. Andy reads the giant receipt and Wendy continues waving her evidence around like it’s gold. A viewer asks Gizelle why she didn’t pull Wendy to the side, to discuss the changes in her personality; and Gizelle states she planned on it but the dinner at Williamsburg went completely left! Wendy was defensive because the group was already questioning her substance and adding rumors about her husband didn’t help. Mia asks Wendy why she’s so upset if the rumors are false, and Wendy continues to defend her sweetie. Gizelle gets another question from a viewer, that questions why Wendy’s kids weren’t exempt from the false rumors about their father. Gizelle makes no sense as she says she thinks the kids would want to hear the ladies’ side smh.

Ashley agrees with a fan in saying everyone’s life is up for conversation and Wendy thinks Gizelle acted calculated. Wendy’s upset that Gizelle didn’t reveal the blogs talk about her as well and Wendy pulls her phone records to prove her point. Andy doesn’t give Wendy’s receipts any life and admits these receipts are a fall from Monique Samuels binder times. Ashley apologized to Wendy and admitted she didn’t mean to question Wendy’s femininity. Wendy accepts Ashley’s apology, but the same can’t be said for Gizelle. After the break it’s Robyn’s turn to be in the hot-seat as we’re reminded of the slump, she experienced this year. A flashback shows Robyn not being business-driven and having communication issues with Juan Dixon. Robyn never thought she could be depressed, and the season made a huge difference in her mood. Juan got some heat for calling Robyn unattractive and Andy is so upset that Robyn dismissed Macy’s.

Robyn was able to pay off her taxes with her hat money and was able to finish the new house! Robyn hopes to get married next year and Gizelle’s the only one who believes that Robyn is getting married, eventually. Andy questions Michael Darby’s hesitation in whether Juan and Robyn will get married. A flashback shows the bromance between Juan and Michael and the group laugh at their friendship. Robyn reveals after their last argument, that Juan drove back and apologized for leaving. Robyn gives us some insight into their relationship but admits Juan can get heated sometimes but he ultimately wants what’s best for their relationship. The ladies give Robyn some pointers in which positions produce a baby girl, and Andy goes check on Nicki Minaj as the women take a restroom break.

Nicki is very excited and looks gorgeous! Andy lets Nicki know she’s going to do her own thing and inquiries about which housewife should be nervous. Nicki tells Andy that she’s going after Ashley and her breastmilk, and she’ll also discuss Candiace’s music career. The husbands make their way to the couch and are all smiles before the shade starts. Andy checks in with Ray and whether he and Karen are still in the honeymoon phase. Eddie admits to being mistaken as Idris Elba and Chris Bassett is representing Candiace on his chest. Juan and Michael couldn’t make it, and Ms. Dorothy calls during the middle of the reunion. Andy takes the phone and questions Ms. Dorothy on her behavior. Ms. Dorothy claims she was just being chatty, but she does plan on apologizing to Chris.

The guys were able to keep the group on fun terms, as we take a look back at the couple’s trip. Andy checks in with Gordon and asks how his experience has been on the show. Gordon states it’s been pretty good, and he tried to have a good time. Gordon admits to being the same at home when he has some drinks in him LOL. Ashley didn’t appreciate Gordon’s antics and refuses to see the comparison between Michael and Gordon. Ashley claims Michael’s never been overtly sexual, but Andy brings up the comment Michael made about sucking Juan’s d***. Ashley laughs it off and claims Michael was only joking. Karen and Gizelle come to Michael’s defense a little, but Karen states Gordon actually made the effort to get to know her. Gordon apologized to Ashley for hurting her feelings and Ashley appreciated it.

Robyn came to Juan’s defense as to why Juan never shows up to the group. Robyn states Juan isn’t able to have the flexibility he desires, especially being a Black man in a White dominant industry. Chris Bassett set the record straight that he doesn’t manage Candiace’s career, but he only manages Candiace and her schooling. Chris is a glorified secretary and wants to have a conversation with Ms. Dorothy about their many issues. Candiace doesn’t know how her family dynamic will be moving forward, and it seems there will be more turmoil next season. Candiace admits to being like her mom but she’s able to set aside personality traits that she doesn’t want to pick up. Andy reviews the tweet from Mia where she claimed Chris Bassett wanted to toss her salad. Mia admitted to throwing out a jab and the group gets on Mia for saying something so derogatory.

Wendy thinks it’s strange that Mia cared whether Eddie looked her in the eyes are not. Mia tells Wendy she’s insecure and a battle of words ensues. Wendy is on ten at this reunion and it’s hilarious to watch! Eddie thinks the group didn’t take his kids into consideration, and no one apologized to Eddie personally. Switching gears, Andy recaps Karen’s vow renewal and candle expansion this year. We saw Karen become an ambassador for Surrey county and attempt to keep these women in line. Karen is very active as an ambassador and reveals she recently brought Wi-Fi to the rural community. Ray wanted Karen to reveal her expansion because he doesn’t feel like Karen markets herself, as much as she should be. Ray just wants his wife to be successful and happy, and I ain’t mad at that! Chris wants to know why Ray is praised for holding down Karen, but he’s being looked at as a bum. Karen reiterates that everyone should mind their business, and Gizelle thinks it’s a difference because Ray was the breadwinner for twenty-plus years.

Chris is upset because the group makes it seem like he came from nothing and has never been anything. Chris recapped that when they first got together, he paid rent at two places until he and Candiace got married. Karen’s happy to have put Surrey county on the map and Andy continues taking more questions from the viewers and Robyn and Ashley explain why their men don’t wear their rings. Ashley reveals that Michael is angrier with Candiace, but out of respect, he takes his concerns up with Chris. The husbands wrap up their time on the couch and everyone takes a quick break before the big reveal! Once back on the couch, Andy makes a comment about needing tequila, and lord and behold Ms. Nicki Minaj makes her appearance! The women are ecstatic, and Nicki looks beautiful! Once Andy passes the baton to Nicki, all bets are off as she gets started with Ashley. Wanting clarification, Nicki asks if Ashley went down to Williamsburg to get more camera time. Ashley attempts to clear her name but Nicki ain’t here for any excuses! This is going to be good! Come back next week, for the finale of The Real Housewives of Potomac reunion!