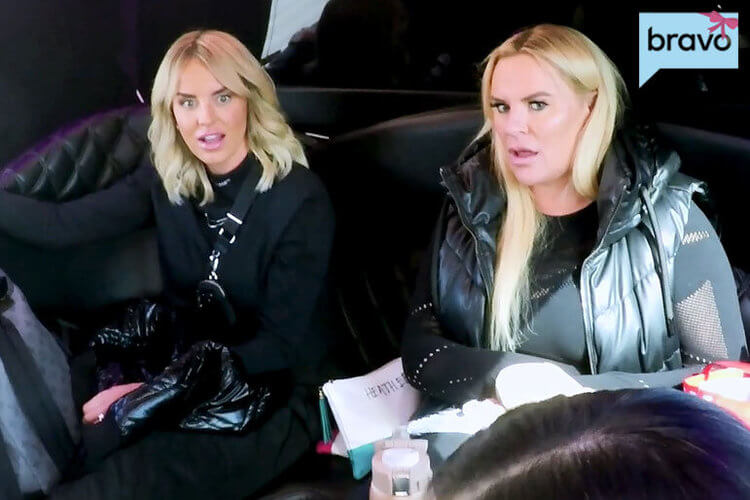 Last week on The Real Housewives of Salt Lake City, Jen Shah received a phone call, says “Hey baby…,” and a few minutes after Jen left, the police show up where the ladies are boarding a bus for the trip to Vail. The police officers ask production about Jen. Then the police roll out to go find Jen with a description of the truck she’s in. Lisa Barlow calls Stuart Smith and we were left wondering what happened next.

In the promos for this season, Whitney Rose, Heather Gay, Lisa, and Jennie Nguyen are shown traveling on the bus reading real-time news on their phones about Jen’s arrest. The federal agents caught up with Jen at her former Shah Chalet. Various news sources reported that Shah was arrested, along with her first assistant, Stuart, in an alleged scheme to commit wire fraud and money laundering. Lisa thinks that someone tipped off the federal agents that Jen was at that location to board the bus with the group.

This episode picks up with the women on the bus, still in the parking lot, attempting to figure out what just happened and why. Lisa calls her husband and then says she’s going to call her attorneys. Jennie thinks that they should just go on with the trip, so Jennie picks up a bag left behind by Jen and they started eating her snacks, passing around Jen’s lollipops as the van leaves the parking lot.

Meredith Marks arrives at her vacation rental in Vail. She’s greeted by the V.P. of Marketing of Cuvée, Christa, to a tour of the home. It’s a beautiful 10,000 square foot eight-bedroom home. They meet Crystal, the “experience curator” for the trip. Meanwhile, Lisa, Jennie, Heather, and Whitney are still reeling from being surrounded by police cars as they prepared to leave. Lisa is asking over and over, “How would they know?”

Lisa seems to be trying to figure out who sold out Jen. Lisa says that only a few people knew the plan that day, but that’s not really accurate. No doubt the whole Shah Squad knew, the camera crew, the production crew, not to mention the ability for law enforcement to track cell phone signals. Jennie thinks that there was a warrant, and that’s why law enforcement came in the way they did.

Lisa’s phone rings, and it’s her husband, John Barlow. Lisa tells John that she talked to Tony K. and Ryan, and they told her “not to talk to any law enforcement without either one of them there.” She tells John that no matter what, they don’t want to be involved in this. And then she acts like no one can hear her when she tells John, “I think Meredith might know something.”

The women discuss that they don’t really understand what it is that Jen does in her businesses. These are four highly successful women who run highly-profitable businesses, and the money Jen made never made sense to them. Lisa says Jen’s “ambiguous” about her business and goes on to say that it’s a “grey kind of business.” Whitney calls it “lead nurturing.” But Whitney says in her production interview that it doesn’t add up how much money Jen makes versus the average person in that kind of job.

When they make a pit stop along the route, Whitney says to Heather, “Lisa’s acting guilty of something. She’s called all her attorneys.” Footage is shown of Lisa talking to six different attorneys. Whitney thinks Lisa’s behavior is suspicious.

The bus travels on to Vail, and the women hope that this is something minor and Jen shows up later on the trip. Whitney starts to read the press reports of Jen’s arrest and that the charges are for money laundering and fraud. Lisa and Heather start crying over Stuart’s arrest (Jen’s first assistant) and how they feel badly for the families involved. Then they read that Jen was arrested. Jennie keeps pressing and asking if any of them knew about it. Whitney says that she thought Jen just had a sugar daddy. Then Whitney confesses in her production interview that she had a sugar daddy. Whoa.

Then Lisa reads that the charges filed could mean up to 30 years in prison. Jennie wants them to calm down and collect facts while Whitney, Heather, and Lisa are freaking out, reading more and more online about it. Whitney explains how businesses can buy “sales leads” and select certain demographics. Heather says in her production interview what she thought about Jen’s business. “I didn’t know it was illegal, I thought it was unsavory.” Now Jennie is suspicious about how much Whitney knows about buying sales leads and targeting buyers.

Footage is shown of federal and local agents executing a search warrant on Jen’s rental house in Park City. The police tell Bravo’s production team that they can reach out to Mr. Shah [Coach Sharrieff Shah Sr.] with any questions.

Lisa calls Meredith from the bus. As Lisa retells what happened, Meredith says, “Honestly, I’m not surprised by this.” Jennie wants to know what Meredith knows. Meredith has an odd reaction that she knew things were off, she tried to tell the other ladies, and she was right, chuckling about it as she talked to the ladies on Facetime. Then after hanging up with Meredith, Lisa says, “It sounds like she knows more than us.”

Back in Salt Lake City, Jen is shown being released from jail. The ladies on the bus are theorizing how things “went down” based on their TV crime show knowledge.

Mary Cosby arrives at the Vail house, and the house is so large, they can’t find each other. Meredith is in the bathtub. Right away they talk about Jen. Mary says she heard about it from Robert Cosby Sr. Then Mary saw it on the news. Meredith relays what she heard from Lisa at the scene. Lisa told Meredith that Jen was tipped off by that phone call, and soon, the “FBI, Homeland Security, and a full S.W.A.T. team came to arrest her.” They discuss how they thought that Jen’s businesses were suspicious, but maybe it didn’t rise to that level.

Meredith says to Mary that she and her family and her business have been “traumatized and terrorized” for a year by Jen, and she just sat back and waited quietly. Meredith says, “I don’t point fingers when I don’t have the facts.”

As the ladies on the bus arrive in Vail, Heather walks in and yells, “It’s the feds.” And Heather says, “Too soon. Too soon.” The women wander around and they find Meredith in the tub still. Why is Mary bouncing on her bed like a toddler? As everyone unpacks and checks in with their spouses and gets ready to gather, Chef Jay prepared dinner. No one has heard from Jen yet.

Meredith starts off the conversation by asking, “What does everybody think?” Whitney said that a friend sent her a tidbit that the feds were tracking Jen’s phone and arrested her on the side of the road. Heather thought Jen might have left their group to go turn herself in, but the rest of the ladies think Jen was running.

Meredith thinks that the investigations could have been going on for many years. One of the articles mentioned that the charges are linked back to events as far back as 2012. Mary thinks Jen is reaping what she sows, but she feels sad for Jen’s family. Meredith tells the ladies that in September Jen called her, trying to get into Meredith’s store. The manager let Jen in. And while Jen was there, a green clutch bag went missing. Meredith asks her manager to text Jen about the bag, and someone agreed to bring the unpaid merchandise back in the morning. Meredith says the name, but it’s beeped out. Meredith was upset that Jen’s employee wasn’t fired. Footage is shown, and it doesn’t look like Stuart. Any guesses which of Jen’s assistants it might be?

Meredith goes on to say that one of her friends told her that she’s “red-flagged in the system of Louis Vuitton because she pays in cash.” Heather says that she ordered an uber for Jen a few days prior, and Jen got in the uber, but then about half a mile away, got out at an intersection. Lisa is pretty cagey about what she knows. Lisa implies that Jen met up with someone at 11 pm on a weeknight. Lisa won’t admit to knowing anything.

Next week, the Vail trip continues with dog sled racing, drama with Mary and Whitney, accusations about Mary’s church, and Jen is shown in a lawyer’s office. Meredith reveals that she had hired a private investigator. So, what do you think about this week’s episode? Sound off in the comments.