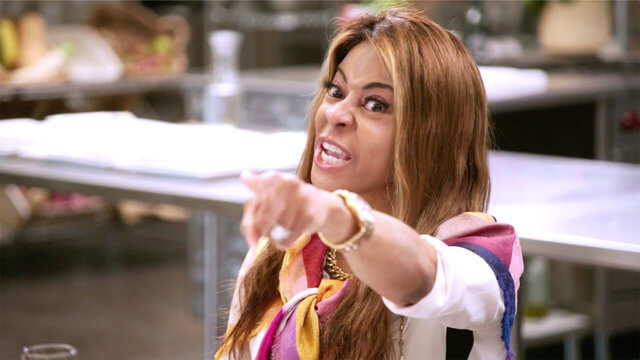 This week on The Real Housewives of Salt Lake City, as more middle school arguments and taking sides continues between Mary Cosby and Jennie Nguyen, then Mary and Whitney Rose, and everyone against Lisa Barlow, there is finally something more adult happening than Whitney on the pole. Meredith and Whitney have invited the girls to go on a trip to Vail. This is the first glimpse of the Jen Shah hunt by federal agents. Will we find out tonight who tipped off Jen to flee the bus to Vail? And how many of the Shah Squad are caught up in the alleged wrongdoings?

The show opens with Jen playing basketball with her son. Whitney and Justin Rose try out the pole (in their family room?) while they are both sober. Lisa is playing a video game with her son. Mary invites the ladies to an Italian cooking class at the Park City Culinary [Art?] Institute, asking each to wear Italian streetwear. Mary isn’t going to invite Jennie. And Mary is irritated that Whitney never answered her Facetime invitation.

Meredith Marks invites Jennie to come to her house to have a manicure and pedicure day. Meredith breeches the topic of the incident that happened between Mary and Jennie at snow tubing. Jennie says that Mary never apologized. Meredith gives Jennie some advice on how to understand Mary better and how guarded Mary can be.

Heather Gay’s daughter, Ashley Gay, opens up about leaving the Mormon church at a lunch with Heather’s niece, Caroline, and Caroline’s husband, Dean. They toast to “burning in Hell” and “outer darkness.” Heather describes the Mormon faith’s levels of the afterlife. Heather confesses she always felt she was morally superior because she was Mormon. And once she was honest with her kids about her own faith, it started the discussion with her children. She talked about the guilt and shame of leaving the church. Ashley feels happier and more like herself not being in church.

In her continuation of the Apology Tour, Jen is attempting to make amends to those she hurt in the past. This week, she is with her first assistant, Stuart Smith, to make new memories by snowshoeing and spending some quality time together. Jen says she envies what Stuart has, being with his children every day. This is confusing. Stuart seems to be with Jen every day.

Jen goes on to self-congratulate herself for sacrificing time with her own children to build businesses that are successful and employ so many. More details to come about that in the court transcripts, no doubt! Jen and Stuart talk about how they will always be there for each other. That’s ironic given some of the press leaks about Stuart possibly testifying against Jen.

At the Park City Culinary Institute, Mary thanks the staff for their preparations, but then criticizes and fusses about the table settings. Stuart drops off Jen from the back of a scooter. That was silly. She’s wearing an Italian flag over her fur. Meredith is in all black. No shock there. Mary tries to say some words in Italian, but it’s not good. Mary told Jen and Meredith that because Whitney didn’t pick up the phone, she texted Whitney to wear mafia streetwear. When Heather and Whitney are driving together to the event, Whitney realizes that she received a different invitation and was set up by Mary. Whitney says she couldn’t answer the call because she was driving a carpool. Why did Lisa walk in, hug Whitney, and say “Mafia gangster” as if she knew about Mary’s setup?

Does anyone else want to fast-forward through Mary’s fake Italian voice? While the ladies are cooking, Jennie is making Vietnamese yogurt with her son, Triton Nguyen, and daughter, Karlin Nguyen. Jennie says that Mary looks great on the outside but is pretty “shi**ty” on the inside. The ladies start by making pasta.

They sit to eat their Caprese salads, and the conversation gets heated about Whitney driving carpool and not sending Mary her name “in Italy.” Then the conversation turns to Lisa’s Fresh Wolf event where Whitney and Meredith were invited, but the others were not. Lisa keeps saying that Jack Barlow and Henry Barlow made the guest list.

Then the topic of Whitney sending gifts to Jen’s former designer assistant. Whitney shut down that topic quickly by saying that there were no gifts sent, but Jen’s former assistant may have purchased something. And then Whitney turns to Lisa to try to figure out why Lisa stirred the pot like that with Jen. Lisa gets worked up and says, “I am done.” While everyone is fired up, Mary wants to do “a cheers.”

Then after Mary says that everyone should do more listening, Mary goes after Whitney. Things get more fired up when Mary calls Whitney “a little girl” and says that’s a compliment. Then after more words between them, Mary says, “You can go… little girl!” Whitney is hurt. Mary thinks Whitney is too busy for her (running a business, taking care of a husband and children.) Meredith talks to Whitney in another room and Whitney confides in Meredith that Mary sends her terrible and mean texts. Whitney doesn’t understand why Mary is coming after her. Then Meredith shares the conversation she had with Cameron at Lisa’s event. Meredith says she was rattled at the exchange.

As the group gets ready to go to Vail, Meredith is already in Colorado for a memorial for her father. Jen’s 2nd Assistant, Murilo, is packing for Jen. Coach Shah walks into her closet and wants nothing to do with packing. Mary is traveling separately to meet the group. Everyone else is showing up to the party bus to travel to Vail. Jen and her luggage show up. Jen gets a phone call and asks Whitney to remove her microphone. As Lisa shows up, Jen says to Heather, “I have some bad news. I just got a phone call and Sheriff Sr. is in the hospital and he has internal bleeding, so I need to go.”

Just a few minutes after Jen left, the police show up where the ladies are boarding a bus for the trip. The police officers ask production about Jen. Then the police roll out to go find Jen. Lisa calls Stuart… to be continued.

In the promos for this season, Whitney, Heather, Lisa, and Jennie are shown traveling on the bus reading real-time news on their phones about Jen’s arrest. The federal agents caught up with Jen at her former Shah Chalet. Various news sources reported that Shah was arrested, along with her first assistant, Stuart Smith, in an alleged scheme to commit wire fraud and money laundering. Lisa thinks that someone tipped off the federal agents that Jen was at that location to board the bus with the group. Next time, more drama unfolds as news breaks of Jen’s arrest.