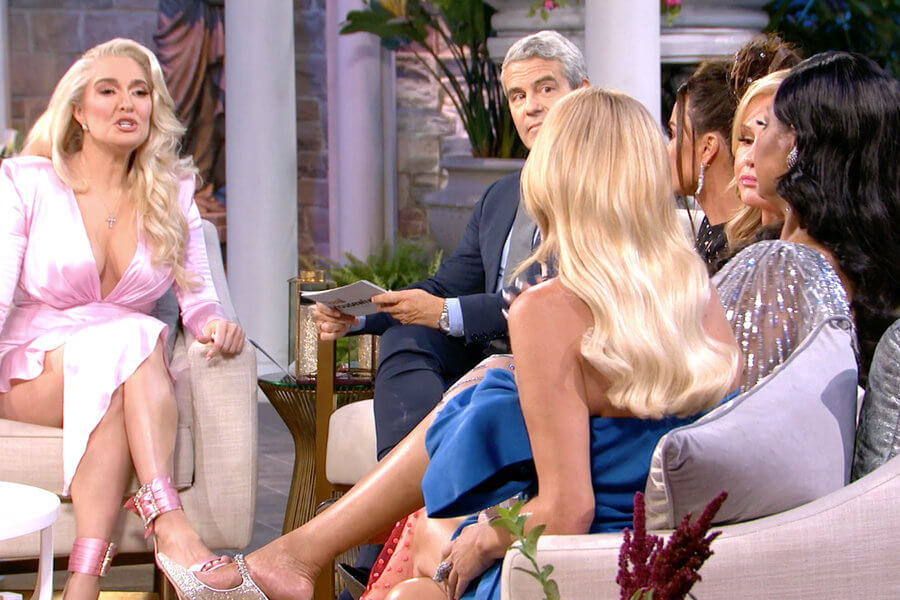 In the final episode of The Real Housewives of Beverly Hills, who is left standing after Erika Girardi’s wrath? Will Sutton Stracke get her apology? When faced with her constant support of Erika and attacks during past seasons, will Lisa Rinna “own it”?

This week’s episode opens with footage from last week. Andy Cohen asks, “Who believes that Erika did not know what Tom [Girardi] was doing?” Sutton, Lisa, Kyle Richards, and Dorit Kemsley, say that they didn’t think Erika knew.

Crystal Kung Minkoff says that she has a question that has been bothering her. “If Rob [Minkoff] did this to me…, where’s your anger towards him?” Erika takes off Crystal’s head, too, just for asking a question. Andy wants to know if the ladies don’t understand what’s going on, why isn’t it normal for them to ask questions? Erika says she’s telling the truth. Andy says, “You’re biting peoples’ heads off.” And Erika replies about how angry she is. Andy continues on to say that he would try to help his friends understand. Erika, of course, claims that she has tried to help them understand. And Andy says, “You just bit Crystal’s head off.” Dorit and Garcelle Beauvais jump in to say that they haven’t seen Erika’s anger at Tom.

Erika’s explanation is that she’s not reacting how “everyone wants her to,” and Andy says, it’s not about that. Erika is just not understanding. She admits that some women are with her, and some are against her, and some aren’t just asking questions in order to understand her. Dorit steps out to say that asking questions is not easy given Erika’s tendency to bite off heads. Then Erika cites as an example the dinner and giggle fest that Kyle and Mauricio Umansky had with Dorit and P.K. Kemsley.

Andy asks if the ladies thought the divorce was a sham, and most shown on camera say no. Dorit says that the L.A. Times article was their first glimpse at what was allegedly happening with the law firm and the “alleged atrocities.” Footage rolls of the gathering without Erika that Sutton organized at Dorit’s house. Erika thinks she should have been there.

Andy turns the conversation to when did Erika know that Tom was having money problems. Erika notes a time in 2020 when she was on Broadway and one of her credit cards was declined. Andy asks the group if they heard any rumblings about money problems. Andy asks how she is paying for things now. And Erika bites his head off and says she has money from Bravo. Then Andy spends a minute on the one-day-out-of-Erika’s life where she didn’t wear waterproof mascara. Yawn.

Erika cries when she talks about talking to Tom to determine whether Tom is in the right place. Footage rolls of Erika admitting to Garcelle that Tom calls every day. She admits he still calls every day. Erika says that during the reunion taping, Tom has called five times. Erika says that she’s asked Tom, “Why would you leave me with millions of dollars of lawsuits pointing at me?” She goes on to say that Tom doesn’t acknowledge anything, and it doesn’t matter what he says because “he’s incompetent.”

Erika talks about the money that was allegedly deposited to her company as a loan from Tom’s law firm. It sounds like she’s disputing that. Erika says $14 million on the credit card was over 12 years. Pause for a minute while Kathy Hilton fixes her lipstick. Erika goes on a rant about untangling everything during the bankruptcy. Andy says that Erika talked about Tom making bad decisions following the car accident three years earlier. Erika says that she’s not a mastermind who was complicit in this and then joined a reality TV show hoping to keep it a secret.

Lisa chimes in to say, “Talking behind peoples’ backs never works.” Andy’s look is priceless. Roll tape. Andy takes Lisa to task for coming after Yolanda Foster/Hadid’s health, Kim Richards’ addiction, and Denise Richards’ marriage in past seasons. Lisa says that she feels terrible about some of the things she’s done in the past.

Garcelle asks Lisa, “If you care so much about Erika, why were you pushing Sutton to say things that would hurt Erika?” Lisa responds, “All I said was that if we were going to get together…” and goes on to say that she wanted the ladies to say things to Erika’s face. And Lisa admits to giving Erika a heads up of what was coming her way from the others in the group.

Erika says she had a breakdown at Kathy’s dinner after being accused of lying. Garcelle wants to know if Erika apologized to Sutton. And Erika says, “For what?” And Garcelle adds, “For that dinner at Kathy’s.” Erika says, “No.” Erika still doesn’t understand how threatening she was? Of course, she realizes that she was vicious, right? Erika bites Andy’s head off (and Kyle’s) and says that she’s going to explain to them what she meant when she said she was going to come after Sutton. Erika says, “Everyone on this show knows that the longer you stay on, everyone goes through their own personal stuff. When it’s your turn, I will not give you the grace that I asked for. That’s what that means.” Andy looks dumbfounded. Andy gets attacked by Erika for rolling his eyes. Erika cites that on the other Housewives shows, it wouldn’t have been a big deal, but “It’s only in Beverly Hills that everyone is so precious.” Kathy laughs.

Sutton admits that she hired security after the dinner where Erika was threatening her. And Erika laughs in her face. Erika and Sutton go a few more rounds and then Erika says that it felt like Sutton was being a “bitchy f-ing c-word.” Sutton goes all in and calmly states her case. Then Erika says that in Del Mar, Erika pretended to be her friend. And Sutton was being sincere. Sutton says that when Erika was pretending, she was lying. And Erika says, “No, that’s actually just playing your ass.” Erika clearly doesn’t understand lies of omission or statements like that aren’t helping her at all.

Another tantrum happens when Erika tries to further state her case about Sutton. And even though, in that moment, the ladies agree with her, Erika still lashes out and says, “Can someone please back me the f-up on what I’m saying?” Then Erika says to Andy, “Why are you smiling at me?” And Andy says, “Cuz you’re a piece of work.” And he continues, “I’ve never met anyone like you.” Andy asks if there is a police report of Tom’s car accident. And Erika says, “They can’t find one.” Andy tries once again to get the story about Tom’s car accident. And the story changes again. Erika is irritated that she keeps getting interrupted. And then Erika refused to discuss her son’s car accident in the snow of Los Angeles.

Andy keeps going back to what the viewers are upset about all season. Andy says that “every attitude you have, every post you make, they equate it as there are victims. She should be talking about them. She should be doing something.” Erika thinks she can best help the victims by cooperating with the investigations. Andy thanks her for answering every question. And Andy asks if she answered every question the ladies had. Erika thanks everyone for hearing her out.

Kathy says that she wanted to apologize to Garcelle for missing her Haitian dinner. Kathy says she wasn’t allowed to come because of Covid restrictions, but she was upset that no one told Garcelle. That piece of paper in her purse (so that she didn’t forget) had Garcelle’s name on it.

They wrap the season with Kathy’s butlers, Carlos and Patrick, bringing in a special cocktail to toast the end of the season.

How does everyone feel after hearing four long episodes of the Erika show? Did anything happen that changed your mind? Does anyone want to see a cast shakeup on this show? Sound off below…