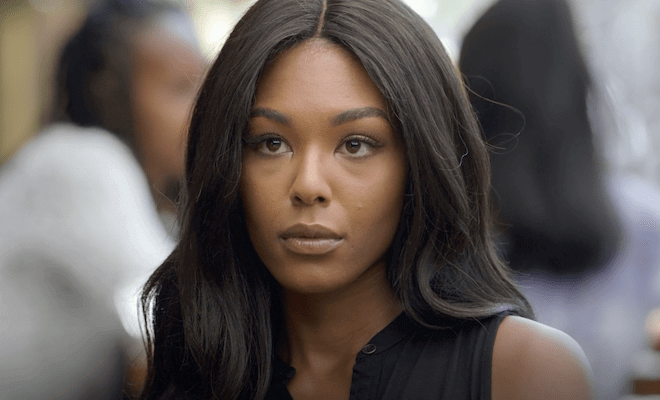 Moniece Slaughter has been accused of getting physical with another woman at a party thrown by Cardi B. The alleged victim is now seeking a restraining order against the “Love & Hip Hop” star.

The Blast has obtained legal documents that confirm a claim by a 40-year-old woman, who alleges that Slaughter attacked her inside the star-studded bash. The woman filed for the order against the reality star in Los Angeles County Court. The reported victim is asking the court to require Slaughter to keep a distance of 100 yards.

The woman stated in the filing that she was at the rapper’s event when Slaughter—“walked into the party and walked over to me attempting to strike me, but I caught her hand and held it until security came.”

“She then came back a second time and threw a drink on me and some friends and then attempted to attack a female that she believed had her hand on my shoulder,” she continued.

The person claimed that she could not disclose names of witnesses to the alleged attack, because they are “celebrities.”

The woman clarified in the docs that the “strike” was really a “punch,” explaining that Slaughter “spotted me then walked over with fist balled throwing a punch but I caught her arm.”

The woman is also claiming an ongoing threat, alleging that the VH1 star “threatened that she will violently attack me and any female she sees with me.”  The alleged victim added that the reality star has also been “verbally abusing and spreading false allegations and harassing me and my family for the past 2 months every day” on the internet.

Slaughter has made headlines in recent months due to her connection to Dr. Dre’s nasty divorce battle. She found herself embroiled in drama after making comments on Instagram about an alleged romance between the music mogul and Apryl Jones. Slaughter later alleged that Dre’s team issued threats in order to keep her quiet.

“As a woman, in a time where we’re told we should be valued, exalted, and protected, I’ve been conflicted as to how I was going to proceed or address last night’s chain of events,” Slaughter reportedly wrote.

The VH1 personality added that she was “torn between allowing men to intimidate or bully me into being silent, or to speak up for myself and stand firm in my positions.”

“For no reason other than the safety of my loved ones, moving forward, I will not be speaking out publicly about all that has transpired. I will not be accepting any media or interview requests or inquiries. I will continue to live my life as I do on a day-to-day basis,” the “Love & Hip Hop” star added, at the time.