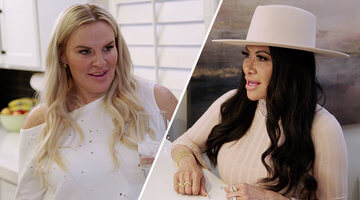 Tonight on The Real Housewives of Salt Lake City, Lisa Barlow is in the hot seat again with another housewife. And Meredith Marks plans a trip to Vail for all the ladies while Lisa plans a more exclusive event for Fresh Wolf company, only inviting Whitney and Meredith.

Jen Shah and her First Assistant, Stuart Smith, are checking in on business deals. Given what is to come with Jen and Stuart, this is interesting and something that likely wouldn’t normally be shown. Stuart says, “We’re adding more people. I just had to get second pass out.” Does Jen get a discount on her rent with product placement of that coffee mug for Red Ledges Luxury Community?

It’s another session of Science Saturday with Jennie Nguyen and Duy Nguyen’s as their daughter, Karlin Nguyen, does an experiment with bubbles. Lisa and her family check in on an event they are planning for their company, Fresh Wolf, to go over final details with Amanda from Utah Foster and Shelby from Blue Sky Stables. John Barlow, Jack Barlow, and Henry Barlow talk about how they want to team up to support and bring awareness about foster care. This cause is close to their hearts. John was given up at birth, returned from his first adoption, and spent almost a year in foster care before being adopted again.

Mary Cosby heads to an Italian restaurant to meet Heather Gay and Whitney Rose for lunch. Mary is trying to speak Italian, but the server can’t figure out what she’s saying. They try to make a salmon ceviche tableside, but Mary thinks if she eats it raw, it’s going to “come alive in her stomach and start building a family.” Whitney asks Mary if she had fun snowtubing. And Mary says, “Next time take your kids.”

Heather wants to know if Mary has mended fences with Lisa. Mary says that she snapped first because Mary felt triggered. Mary says, “I lost someone over that. Don’t question what I’m saying.” Mary goes on to say that she lost her mom because she knew she was right and wasn’t backing down, referring to marrying Robert Cosby Sr. Mary says that her mom was expecting to be “next in line” for everything, the church, the husband, the properties. Mary says that she hasn’t spoken to her mom in 25 years and her siblings are divided over it, too. Heather and Whitney tell Mary that her friendship with Lisa will be dependent on whether or not Mary will “fall back into line.”

Jack is coordinating a photo shoot for Fresh Wolf. Lisa says, “Jack has been making business plans since he was like three years old.” Jen shows up to the photo shoot wearing the craziest and creepiest real timber wolf head with two paws and a tail. Wow. And she brought a second one to the photo shoot!

Lisa and Jen sit down to snack, and Lisa immediately brings up Jen’s up-and-down relationship with Heather. Lisa says that Jen needs healthy friendships and then brings up someone, a former employee/Shah Squad member for Jen, that Jen clearly doesn’t want to talk about. Jen and this person had a fallout over a dress that wasn’t made on time (according to Jen) and the employee had a different story about why the dress wasn’t made on time. Then audio was leaked of Jen’s verbal attack of the designer. Jen says, “I roll deep. I have my Shah squad. I have a lot of people around me.” Jen freaks out and wants to know why Lisa brought it up. Jen demands loyalty from her friends. Lisa, too. Lisa throws Whitney under the bus when she brings up that Whitney gifted this designer with some of her products.

Whitney meets up with her brother, Will, for Blader’s Club, their excuse to hang out and act like 1990s rollerbladers. Their outfits are everything! Whitney asks her brother how their father is doing. Will says that he talks to their dad frequently. The two of them meet up for disc golf or breakfast. Their dad is just keeping off the grid for now. For all that Whitney has done for their father, she hasn’t talked to him in six months. Whitney is sad that she supported her father in every way, and she worked diligently to get her siblings on board with helping their father, and now they have no relationship.

The last time Whitney saw her father, he was at her house. She and Justin Rose went out to dinner and her father watched the kids. Some kind of mix-up happened with the food delivery driver, and Whitney’s dad chased the guy on his motorcycle and yelled at him. The driver was upset and called Whitney. The kids were upset. Whitney came home and thought he might not have been sober. Her brother is supportive and says, “Just because they’re blood, doesn’t mean they’re family” and encourages her to do what’s best for her.

Meredith and her daughter, Chloe Marks, meet Heather Gay and her daughter, Ashley Gay, for lunch to talk about college choices. Chloe asks Ashley if she’s interested in Greek life. Meredith makes a comment about Heather “the goodtime girl,” wanting to know more. Heather says the extent of her goodtime girl activity was going on a booze cruise as a companion for a little person. She thought that being sober on the cruise but winning vodka for a singing contest was sewing her wild oats. Meredith wants to invite the group to Vail but is struggling to invite Jen after all that happened over the past year or so.

Jen comes to Heather’s house, and they talk about the lack of good men out there for Heather. Jen comes bearing gifts—pin the pistol on the cowboy, candy g-string, edible body pens, nipple tassels, and last but not least… Dick Head Hoopla the ring toss game. Is anyone wondering which of Jen’s assistants was stuck going shopping for this set of gifts?

Heather as “co-host” invites Jen to go to Vail. Jen tells Heather about what Lisa said about Whitney sending some of her products to Jen’s designer after the social media audio leak. Heather wants to know why Lisa would stir the pot with Jen. Whitney told Lisa that she and Meredith were the only two from their friend group to get invited to the Fresh Wolf party. Whitney wasn’t feeling well and did not attending. Heather can’t figure out why Jen wasn’t invited. Jen is mad and hurt that she wasn’t invited. Her aunt has adopted two children out of the foster care system.

Jack gave a great heart-felt speech about foster care saying that he lives with a foster kid and it’s his dad. Lisa tells Meredith what happened with Jen at the photoshoot. Lisa introduces Meredith to Cameron, her friend who has gossip and warnings about Mary and Mary’s husband, Robert Cosby Sr. After Lisa is pulled away for a photo, Meredith is left with Cameron, and he tells her that he’s thankful to be out of Mary’s church. Meredith seems noticeably uncomfortable about having this intense conversation with a stranger about the allegedly harmful things that Mary and Robert Sr. have done. Cameron tells Meredith to “be careful” around Mary.

Meredith is visibly shaken at having that conversation and goes to find Lisa. Cameron was vague in what he said, saying that it was Mary’s story to tell. Lisa fills in some gaps by saying that Cameron used to be a preacher at Mary’s church. Lisa says that she believes that Cameron has experienced “real trauma” but declines to talk further about it at the event for her kids.

Next time, Lisa gets defensive when the women feel slighted about not being invited to the Fresh Wolf party. And, at long last, as the women load up in the party bus to go to Vail, Jen gets a phone call. Jen leaves quickly and police swarm in looking for Jen Shah.