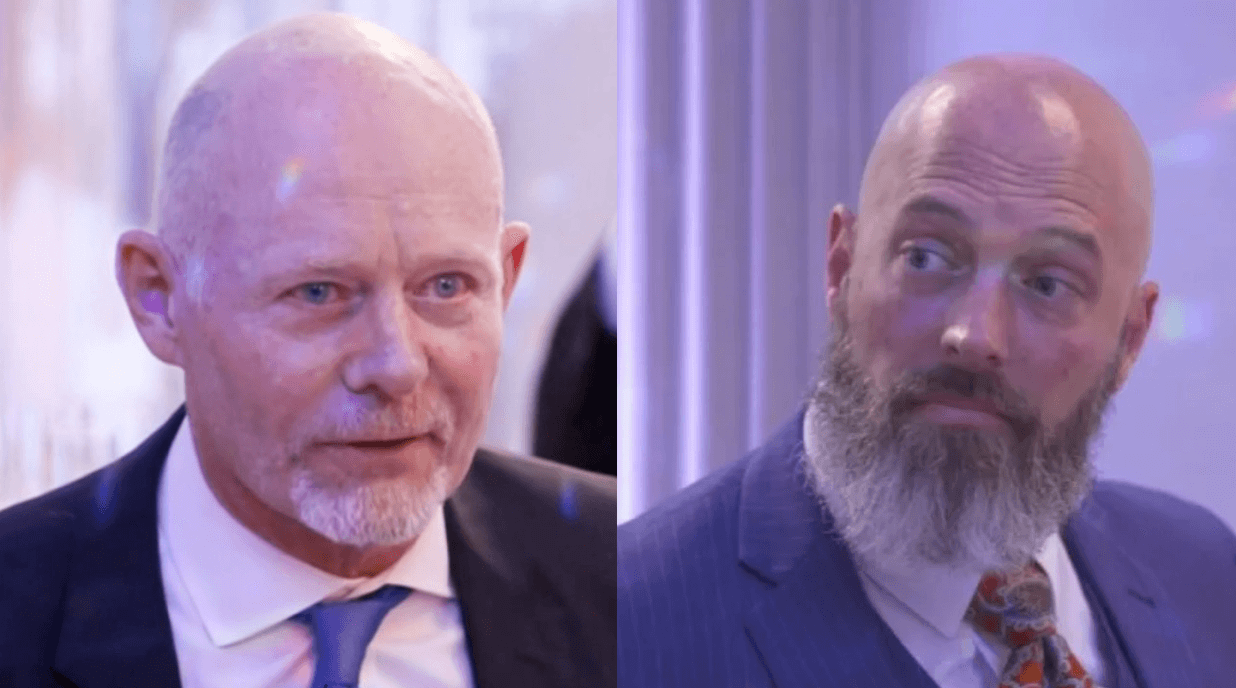 After insults, rumors, and the famous salad toss, we’ve reached the finale of The Real Housewives of Potomac. Karen and Ray Huger are prepping for their upcoming vow renewal. Reviewing the final touches with their wedding coordinator, the pair want to make sure the details are in order for their big day. Unfortunately, due to suspected kidney stones Karen’s daughter, Rayvin, won’t be in attendance, but their son Brandon will be and will give Karen away. Downtown, Ashley and Michael Darby grab a bite at a local restaurant. To my surprise, Juan and Robyn Dixon show up for a double date with the Darbys! We all know Michael loves Juan, so this double date is already off to an interesting start.

After getting seated and ordering their drinks, Juan asks how everything with Michael has been. Michael explains how he’s been training with a personal trainer and Robyn reflects on how Michael is normally missing in action. Not quite understanding the bromance between Juan and Michael, Robyn asks Michael if he’s willing to come back around the group. Michael admits to missing the Dixons, but he doesn’t want to spend time with Candiace or Chris Bassett. Juan wonders if the two ever hashed it out, and producers remind us of last year’s scuffle between Chris and Michael. Michael boldly states that Chris is “living off his wife, and that’s basically the worst thing you could do.” Robyn divulges to Michael that Chris is Candiace’s manager and seems to get off on the fact that Michael is shading her “friend’s” husband. Juan just wants positivity and Ashley takes this chance to introduce the prospect of another baby Dixon.

Jumping and asking all the questions, Ashley isn’t going easy on the inconsistent couple, as Juan and Robyn attempt to satisfy Ashley’s curiosity. Both agree they don’t want a baby at the moment, but Juan believes it happens whenever. Robyn reveals that she didn’t enjoy the journey of motherhood thirteen years ago and did most of the work (like most mothers do, sadly) in the beginning. Juan attempted to save face, but Robyn wasn’t shy in letting Ashley know that Juan wasn’t around much. Michael gives the Dixons reassurance about having kids at an older age, and Robyn wonders if people ask if Michael is the kids grandfather, yet. Goodness, LOL.

Candiace, Chris and Ms. Dorothy arrive in style to meet Candiace’s new music deal with E-One Nashville. Candiace is excited and grateful for the chance to showcase her talent to the world, and it seems like she has a supportive team behind her. Getting started with the meeting, Candiace explains how surreal the moment feels. Candiace reveals the videos she’s recently shot, and her new business associates ensure the Bassetts they can make they’re own rules. To continue in a positive direction, Candiace’s team want to be proactive on social media. Candiace makes a comment about social media being the place that she “shines” and Chris makes it clear “shine” is a relative term. Candiace is a disaster on twitter, but Candiace’s new team wants to showcase the artist, not the drama queen.

Candiace quickly changes the tune of the room by sheading a few tears, but it’s clear Candiace is happy to get the chance to live out her dreams. Once her tears are wiped away, Candiace signs and is a certified artist in these streets! At Robyn’s warehouse, Juan and Robyn get a feel of the new space of Robyn’s ‘Embellished’ line. Juan makes a few minor changes to the space and Robyn takes this chance to speak her mind. Robyn explains to Juan that the house may give them room for a new baby, but she doesn’t want the family to go through the same issues as before. Juan immediately gets frustrated at the mention of such mishap and dismisses Robyn completely! Robyn continues pushing and further insists that Juan never changed a diaper, and she would expect him to be hands on if another baby was to join the family. Juan reaches his limit quicker than I expected and walks away from Robyn. He doesn’t appreciate Robyn making him out to be a “d**khead” and thinks Robyn’s being stupid.

Robyn follows Juan outside to his car as Juan threatens to take his mic off. Handing Robyn his microphone, Juan reiterates how he’s not the same guy he used to be. Juan gets in the car and Robyn continues explaining her side. Robyn tries to dig deeper and explain what happened when the boys were infants, but Juan kept cutting Robyn off. It’s clear that Juan takes pride in being a dad, but he’s fed up taking the blame in the downfall of their relationship. Juan tells Robyn he’s not discussing the topic anymore and he rolls up the windows (with her fingers still there) and proceeds to exit stage left. Poor Robyn.

It is the day of Karen’s vow renewal! Looking beautiful, Karen checks out the venue as she scurries to get dressed. Wendy Osefo is getting fashion advice from her beautiful daughter as Ashley struggles to not let motherhood define her. Candiace gets ready with Ms. Dorothy, and Robyn checks in with Gizelle Bryant. Gizelle and Robyn opt to share Juan for the night, and Robyn discloses the disagreement between the two earlier. Robyn vented to her friend and doesn’t know where to start with Juan going forward. Arriving in style, Ray Huger is all smiles as he greets everyone. Candiace arrives first and immediately disapproves of Karen’s venue, as the three stooges struggle up the stairs. Mia and Gordon Thornton arrive shortly after and surprise: Mia doesn’t appreciate the steps either. Ashley arrives without Michael as Gordon greets Chris.

Ray is making his rounds throughout the party as Ashley and Ms. Dorothy catch up. Ms. Dorothy doesn’t seem to have any issues with Ashley, as she congratulates her on the new baby. Candiace tells Chris she’s not giving the “Ogre” any life, but clearly Ashley lives in Candiace’s head rent-free. Gizelle shows up and appears to be in good spirits although she’s alone. Although Gizelle’s still in the boot, she manages to climb the stairs and runs into Candiace in the process. Greeting the ladies, Ashley lets the ladies know Michael is dropping Dean off at a birthday party but will arrive later. Ashley’s hoping for an interesting dynamic tonight, especially with Michael coming to settle the score with Chris.

Robyn and Juan arrive as Karen snuggles into her dress. Askale and Dre Davis arrive and not too far behind Wendy and Eddie arrive as Wendy struggles to exit the car. Once inside, everyone is all smiles and ready to support Karen and Ray. Wendy surprisingly speaks to Robyn, but the good vibes are ruined once Candiace notices Wendy didn’t greet Gizelle. Candiace tries to tell Wendy to speak to Gizelle, but Wendy isn’t phased by Candiace’s request. The Osefos take their seat as Gizelle complains about Wendy not speaking to her. Juan changes subjects to offer his condolences to Gizelle’s fake relationship, and Gizelle rebounds by admitting she’s back in the dating pool. Gizelle reveals her new boo is younger and a commentator. However, Gizelle isn’t giving away any more clues about her new man.

Juan wonders where Michael is, and Chris sounds off about wanting more wine. Candiace reveals Chris doesn’t wear his ring in the house and Gizelle asks Ashley if Michael wears his ring. Ashley admits that Michael doesn’t wear his ring and that he has a huge knot on his finger that prevents him from comfortably wearing his ring. Unsatisfied with Ashley’s answer, Candiace and Gizelle side-eye her as Ashley saves face. Karen jokes with Macy Gray as she prepares to walk down the aisle. We get a quick glimpse of their ongoing friendship as Karen describes her beautiful dress from Turkey. Ray is in position and the spotlight is on Mrs. Huger as she smiles and greets her husband of 25 years. The officiant provides his sermon and the Hugers exchange beautiful vows as we see a montage of their love. Once the two kiss, the Hugers carefully make it down the stairs where Macy Gray serenade their first dance.

Ray may have got the name of Macy’s song wrong, but he definitely got the moves right as he dances with Karen. Michael arrives and Ashley is really excited to see him (almost like she knows something’s about to go down). Michael greets the fellas and Mia is surprised Michael exists. Candiace tells Askale that Michael is insufferable and that he’s not morally good enough for Ashley. Ray continues chatting up Gordon and Chris as Karen takes her pictures with her family. Gizelle greets Michael as everyone sits down to eat. Michael and Chris are at the same table and the tension is building when Juan decides to be peacemaker. Gizelle tries to throw Chris a bone, but Michael isn’t interested in talking to an un-intelligent person. Chris chimes in and explains to Michael that he can let it go. Chris tries to explain that Michael’s approach last year was disrespectful, and Juan sits beside Michael to keep things civil.

Michael believes he’s owed an apology and that Chris is apologizing in a back-handed way. Robyn tries to convince Michael to take some accountability and Michael doesn’t know what he’s done wrong. Candiace is fed up and says, “This is the whitest privilege, I have to go!” and decides to leave the table. Candiace is disgusted at Michael’s inability to take accountability and thinks his wealth allows him to do as he pleases. Juan wants them all to be bigger men and move on and Michael admits to not having any issues with Chris. Gizelle wants them to not disrespect each other’s wives moving forward, and the two men agree as they hug it out. Karen feeds Ray some cake as everyone gets on the dance floor. Karen changes into another dress as Juan reveals he’s leaving early for work. Clearly Robyn and Juan aren’t in a better space since their altercation, and Chris and Candiace aren’t too far behind.

In a corner Candiace is upset that Chris is shaking his head at her. Chris is fed up with Candiace’s outburst and wishes she could regulate her emotions. Candiace doesn’t want to bow down to Michael and Chris doesn’t want to hear her excuses. Candiace curses Chris out once again before leaving him muttering under his breath. The crew finishes out the season dancing and living it up! Another great season in the books but be sure not to miss next week for part one of The Real Housewives of Potomac Reunion!