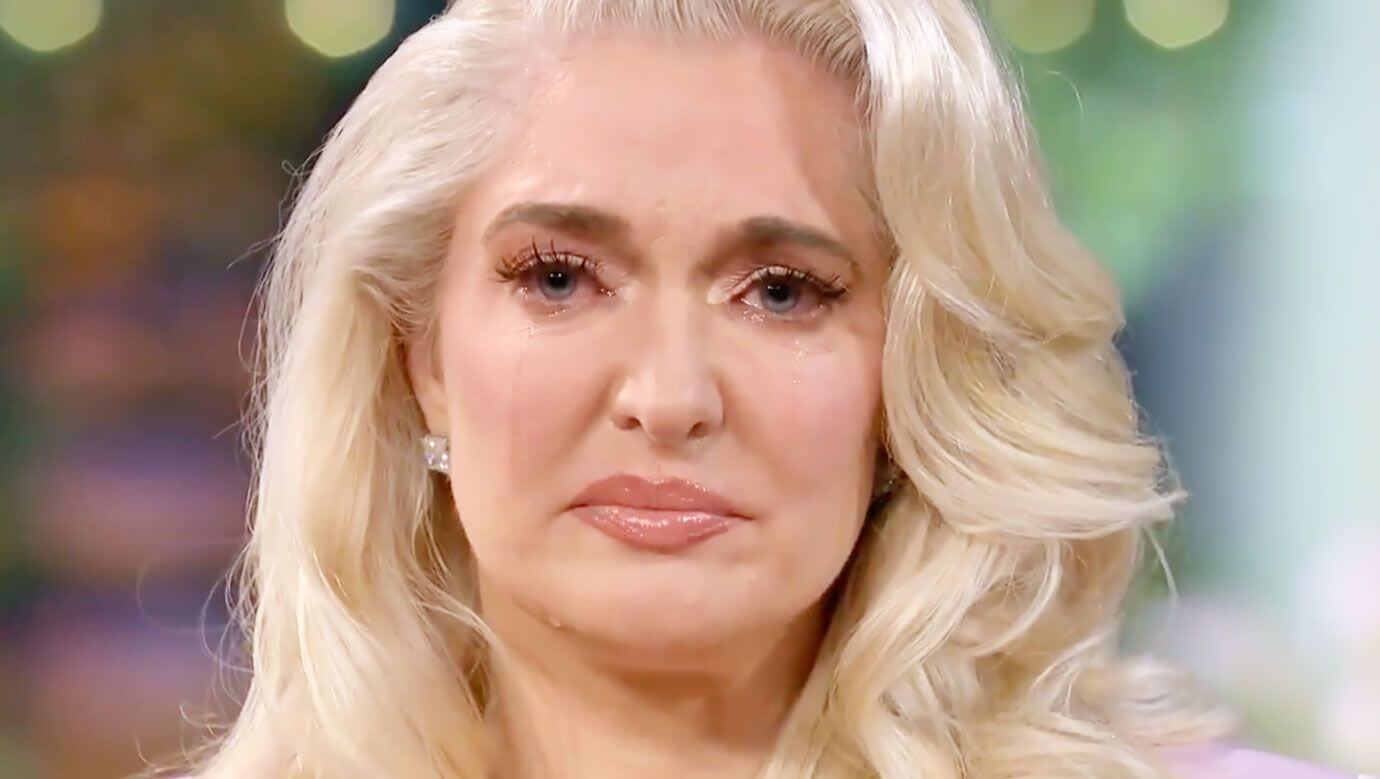 This week on Part 3 of The Real Housewives of Beverly Hills, the footage of Kathy Hilton and Kyle Richards’ path back to being sisters/friends played again. Kyle says that she didn’t regret doing the 2018 ‘American Woman’ television project about their mother, the event that drove the largest wedge in their relationship (along with Kim Richard’s alcoholism and Mauricio Umansky leaving Rick Hilton’s real estate firm and starting his own.)

Kyle said their children forced the issue to get the sisters back together again. Kathy says it was her. Kathy thinks that sometimes people say they want to hear the truth, but they really don’t. Kyle and Kathy have bonded over the girls’ trips and the laughs. Andy asks, “How has Kim reacted to the emergence of Kathy Hilton on The Real Housewives of Beverly Hills?” Kathy says, “She loves it.” Kim’s advice to Kathy before Kathy started filming was “don’t lose your temper.” What about don’t drink too much? What about don’t return unwanted bunnies on national television?

Andy Cohen focused next on Crystal Kung Minkoff. Andy shows footage of Crystal encouraging her children to maintain their Chinese language and culture, her struggle with bulimia, and the fact that she worked at an escort agency (sort of, but not really). Crystal says that between high school and college, she worked at an advertising agency that made ads for call girls.

The saga of Crystal’s leather pants and Sutton Stracke’s meltdown are brought up again… proof that there didn’t need to be a four-part reunion! Andy brings up “violation,” “that girl,” and “you don’t see color?” Side note – Garcelle Beauvais finally fixed her lopsided, distracting earring. Thank you to whoever noticed. Oh wait, now it’s lopsided again. The video editor must be resequencing the conversations.

Crystal shares that she talked to her mom about her eating disorder before the footage aired. Crystal shares her sad experiences her dad had with racism and the hate speech she endured on social media. Andy loved her featuring her culture on the show.

After the ladies emerge from the pandemic, they are excited to glam, wear their fine jewelry, buy new cars, display their Hermés bags, and wear those horrible $2000 fuzzy slippers. Andy asks Lisa if she has moved her vintage dresses somewhere more secure than her garage. She says she moved them to a place that stores vintage clothing.

Garcelle was asked who has the best fashion sense, and she says, “Dorit.” Andy seems shocked when Dorit Kemsley says that she buys every piece and pays retail for it. Andy thinks that the ladies get all sorts of free things to wear because of “product placement” on the show. Is it important to a business to have grown women acting trashy if you can say, “but they were wearing my dress?”

It lightens the mood when Andy shows footage of Kathy’s addition to the cast. Scissors, chia seeds, dental supplies, box fans, crazy sayings, the lampshade hats, and her sense of humor… she’s brought a lot of fun to the show. Andy thinks that seeing Kathy helps him understand Kim better. Kathy says she loved living nine years at the Waldorf Astoria and raising kids there. She explains that her father-in-law and Rick’s grandfather, Conrad Hilton, owned the Hilton Hotel chain and the chain was sold about ten years ago. Most of the ladies agree that Kathy could be permitted to cut their hair but not do any dental procedures.

Andy turns his attention to Erika Girardi. Andy plays footage of the media coverage of the divorce from Tom Girardi, the accusations against him, Erika’s shifting revelations about it to the group, and what each of the women had to say about these things when Erika wasn’t around. The footage airs of the women being nervous and feeling like they are vulnerable to being associated with her. Footage rolls of the threats Erika made to anyone who questioned her throughout the season.

Andy asks Erika, “Who is for you and who is against you?” And Erika responds, “I don’t know. You should ask them.” Erika admits she’s keeping score, but when pressed, she says she’s going to keep that to herself. Kyle interrupts to say that the women felt that they were in a difficult position. They didn’t know what to believe, but also couldn’t figure out why Erika wasn’t telling them things. Erika says that what hurt her the most was the dinner that Kyle and Mauricio had with Dorit  and P.K. Kemsley. Erika was hurt that they mocked her life and her family.

Garcelle says, “I want to ask why didn’t you understand that we could be concerned with us being grouped in on a story like this?” Erika says that they shouldn’t be concerned because there is nothing legally that ties all of them to Erika “other than being mentioned in articles.” Erika says, “You can’t be fearful of that because you know the truth.” And cue… Sutton…

Sutton says, “But let me say something. I really got upset after reading the article ad nauseum and I wanted us to know, because we weren’t told anything. I didn’t know what was going to happen and unfold in this case.” Erika interrupts Sutton and says that Sutton should have called her. Sutton says that she felt like Erika kept running away from the group. Erika says that she didn’t leave Tahoe because of the L.A. Times article, but because of the issue with Garcelle where she said that Garcelle betrayed her trust.

Kathy said on other Housewives shows “there have been lawsuits and big problems,” and Andy interrupts to say that this is different because there are actual victims. Erika maintains, “We are a long way from finding out what really happened here.” Erika says, “How the f- do you think I feel?” Andy says, “How do you feel?” And Erika says, “Horrible. And I’ve said that.” Almost everyone in the room says (at the same time) that Erika never said that she felt bad for the victims in all the months of filming. And Andy calls her out for never saying it either.

Erika talks over Andy and says there is a “real boundary as to where I can and cannot go” but she goes on to say that “IF anyone in these cases are proved wronged, I want them remedied.” Andy says, “That’s not the issue.” And good for him for saying that people have perceived all along that “you come off as if you’re the victim.” Erika turns on Sutton again when the topic of “who is the victim” comes up.

Erika is firing on all cylinders that the ladies on the show didn’t come to her, but then talked behind her back and don’t believe things she says. Kyle says that there is a disconnect between what she says and her own tone-deaf social media postings. Andy says she is presenting an attitude of “consumption and indifference.” Even Lisa Rinna agrees that the social media postings by Erika Jayne are harmful to how people characterize her.

Andy asks the question left from last week, “What did Erika know? Did you have any sense this alleged theft was happening?” Erika says that she didn’t work at the law firm and “all the financials are kept there.” Then another question is asked of the ladies. “Who believes that Erika did not know what Tom was doing?” Sutton, Lisa, Kyle, and Dorit, say that they didn’t think Erika knew. Garcelle says that Erika was living such a fabulous life that maybe she didn’t want to know.

Crystal says that she has a question that has been bothering her. “If Rob did this to me…, where’s your anger towards him?” Erika takes off Crystal’s head, too, just for asking a question. In an attempt to defend Erika for not bashing on Tom, Lisa gets interrupted, and Erika says, “You don’t know what I have done or what I will do.” Andy says, “What will you do?” And Erika says, “You’ll just have to wait and see, won’t you.”

Next week on the conclusion of the four-part reunion, Erika reveals that Tom has called five times while they were taping the reunion show. When they continue to talk about how the women questioned Erika too much or not enough, Erika calls Sutton the c-word. And things devolve from there.