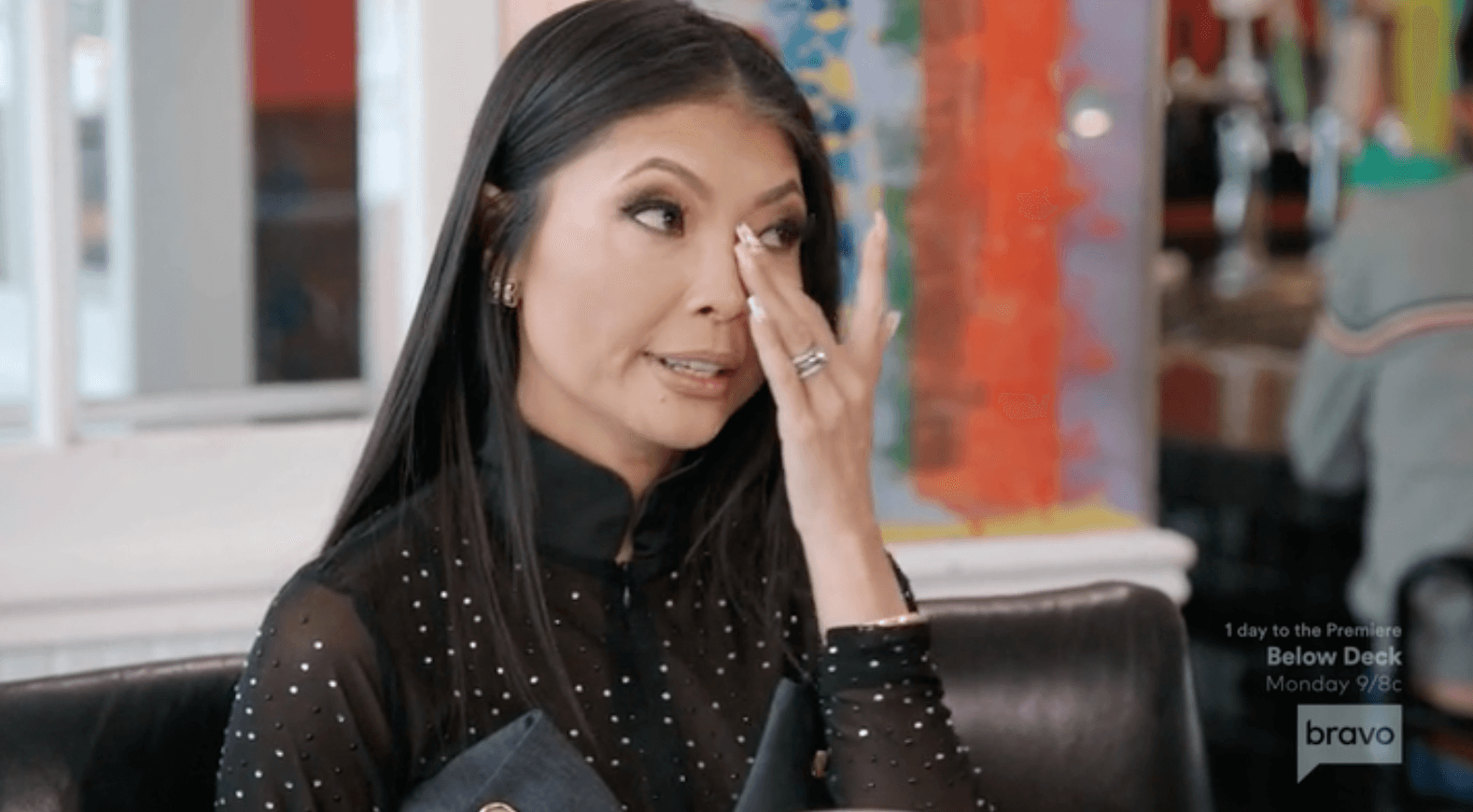 On tonight’s episode of The Real Housewives of Salt Lake City, the ladies go snow tubing. It should be a fun, light-hearted activity, right? Not with this group. We might need a scorecard to keep track of who’s mad at who this week. And there’s more awkwardness as Angie Harrington and Lisa Barlow see each other for the first time after caterer-gate.

Tonight starts out with Whitney Rose calling to invite everyone to go snow tubing. Whitney gets Mary Cosby’s voice messaging system that has never been set up. There is nothing shown where Whitney calls Lisa. Maybe it’s just a text.

Lisa picks up her son, Henry Barlow, at school. They are going to get their fast food on. Henry shares that he’s having trouble with one of his friends. Lisa’s solution is for them to hang out and “make peace.” Lisa thinks it’s better to resolve it, just like what’s happening between Whitney and her.

Jennie Nguyen and Duy Nguyen head to Oyster Bar to have some time away from the kids. Jennie admits they haven’t talked much since the “sister wife conversation,” but oyster night is one of her favorite date nights. This time, Jennie brings up the discussion about more children. She’s challenging Duy to find out if he really wants a sister wife. Jennie asks if it’s illegal. Duy is right on top of it. He says that it is not against the law in Utah.

Jennie is jumping right into what sharing her husband would look like, the schedule, the nature of it. Jennie says that the other polygamists in their community are LDS, not Catholic. Jennie wants to know if Duy has talked to the priest. He says, “No, I haven’t.” Duy is saying that the Ten Commandments don’t say that you cannot have multiple wives. He’s getting flippant about it, and Jennie is trying to discuss it. Jennie is so hurt at the idea of having a sister wife and likely at the thought that she can’t have more children, so Duy is thinking about looking elsewhere. Duy doesn’t want to lose Jennie, but he also wants a big family to fill the emptiness in his heart from losing their daughter. Jennie suggests that he go to a therapist to deal with his trauma, but Duy is convinced that he knows what he wants is to have more children. Duy agrees to think about it.

Seth Marks and Meredith Marks meet up for lunch. Seth immediately compliments her on her outfit. “It’s the perfect blend of elegant chicness and hot as f-ness.” They talk about building a house and where they want to build. Seth just wants a view that he can “brumski motorboard” to motivate him to get out of bed. Meredith says in her production interview that before they want to a marriage therapist, they went to a discernment therapist to see if they should stay married, and then the discernment therapist helps them get the help they need.

Meredith thinks that one place their family could use more balance is the demands on her… mom, mom, mom, instead of the kids (adult kids) asking dad. Seth’s advice is to let the kids figure out more on their own. Meredith wants help managing the stress. And Seth says, “I will jump on stress grenades all day for you.” Meredith says, “Amazing.” And Seth adds, “Naked.”

Heather Gay’s planning a big one-year-old baby party for her set of employees who had baby boys last year. It’s also the one-year anniversary of Heather’s expansion of her business. At Heather’s party for her employees, Whitney tells Heather, Jen Shah, and Angie about the double date with her husband, Lisa, and John Barlow. Whitney feels that bringing her and Justin Rose to the restaurant owned by the caterers, was manipulative on Lisa’s part.

Whitney tells the group that she called Lisa out on her BS and shut it down. Angie is upset that she was called a liar about the catering texts and situation at Casino Night. Jen’s not sure what to think. She doesn’t think that setting up Whitney is Lisa’s “vibe.” Lisa and Whitney agreed to move on, but Angie’s upset because Lisa now wants nothing to do with her. Angie is heartbroken that Lisa is treating her this way. Whitney tells Angie that they will both be at the snow tubing gathering. Whitney wants to fluff out Angie’s aura, so she asks Angie to stand up, and Angie falls over, drunk.

The ladies are gathering for an outing for snow tubing at Soldier Hollow organized by Whitney and Mary provided a party bus for the two-hour drive “that’s 60 minutes twice.” Angie is joining in and so is Whitney’s friend, Connie. The party limo stops in Park City to pick up Jen, Lisa, and Meredith. The champaign is flowing and Whitney has a megaphone. After the conversation comes up again that “carbonation hardens the ovaries,” Lisa asks if that’s real. Then Lisa says she’s going to google it. Mary is upset that Lisa is saying that about her. Mary’s coming for Lisa, and Heather is pleased about that!

Once they get out of the limo, Lisa asks Mary what the anger is about. Mary’s upset that Lisa talks down to her. Out of nowhere, Mary wants to know if Lisa questions everything she says because she’s black. Mary and Lisa escalate it more, calling each other too sensitive. Then Jennie tells everyone to STFU and have some fun. Then Mary says to Jennie that she shouldn’t talk like that, and Jennie’s not having it. Jennie is still struggling with her emotions over her talks with Duy about having more children through a sister-wife. Heather and Jen are happy that they aren’t the ones having the fight, so they chest bump.

Jennie says, “I don’t care about what you think, Mary, so just keep your mouth shut.” Jennie doesn’t want anyone to mess with her. Then Jen decides this is “a lot of walking” and is looking for her assistants to drag her tube for her. Then Mary is complaining about having to walk so far. Mary wants to know how to “get out” if she doesn’t want to snow tube again.

While Angie and Whitney run off to get ready to prank the group, Heather asks Mary about what happened in the limo with Lisa. The prank falls flat as Angie and Whitney show up in costumes and try to scare the others. But now Mary is going to judge the tubing race. The losers have a surprise at lunch. Jen tries to bribe Mary with jewelry. They team up in groups to launch the race, and Lisa is already upset that Meredith and Jen haven’t had her back.

Heather comes up with a strategy for her team to go face down, boobs out. It’s the Great Salt Lake Silicone Showdown. Team “Tits Out” of Angie, Heather, Jen, and Whitney versus team “Tits In” of Connie, Meredith, Jennie, and Lisa. Mary is at the bottom of the hill judging the winners. That looks like a really small hill from the vantage point where Mary is standing. Team “Tits In” won. So, the losers have to wear wigs during lunch.

Mary is pouting and not eating. Lisa right away starts talking about how she doesn’t want anyone questioning “her intentions.” Cue Angie’s side-eye. So as soon as Mary says she’s ok with Lisa, Angie says that she’s tried to reach out to Lisa after caterer-gate. Angie wants to move on, but Lisa wants an apology. Lisa thinks that Angie is hurt over something she misinterpreted. Whitney jumps in to defend Angie and says that Angie was only asking about it. Lisa goes after Whitney again. Lisa goes off and says that she needs everyone to stop questioning her all the time and she needs them to get off her back.

Lisa is really upset that she thinks Angie is lying about her. But Lisa is also upset that Jen and Meredith aren’t standing up for her. And what about Lisa’s long-time friend, Jennie? Lisa is crying and Angie comes around the table to hug her. Then Jennie asks Mary, “Are we good?” and Mary says, “Sure.” Jennie tells the group, “You don’t know me. Don’t attack me. Period.” Jennie then tells the group that it’s a lot for her that day, given that it’s the anniversary of her daughter’s birth and death. Jennie breaks down in front of the group. And Lisa is wondering why Jennie would share this very personal story with this selfish group of women.

Next time, Meredith plans a trip to Vale for all the ladies while Lisa plans a more exclusive event, only inviting Whitney and Meredith. At Lisa’s event, Lisa introduces Meredith to someone who has gossiped about Mary and Mary’s husband, Robert Cosby Sr. Meredith is noticeably uncomfortable about having this conversation with a stranger.